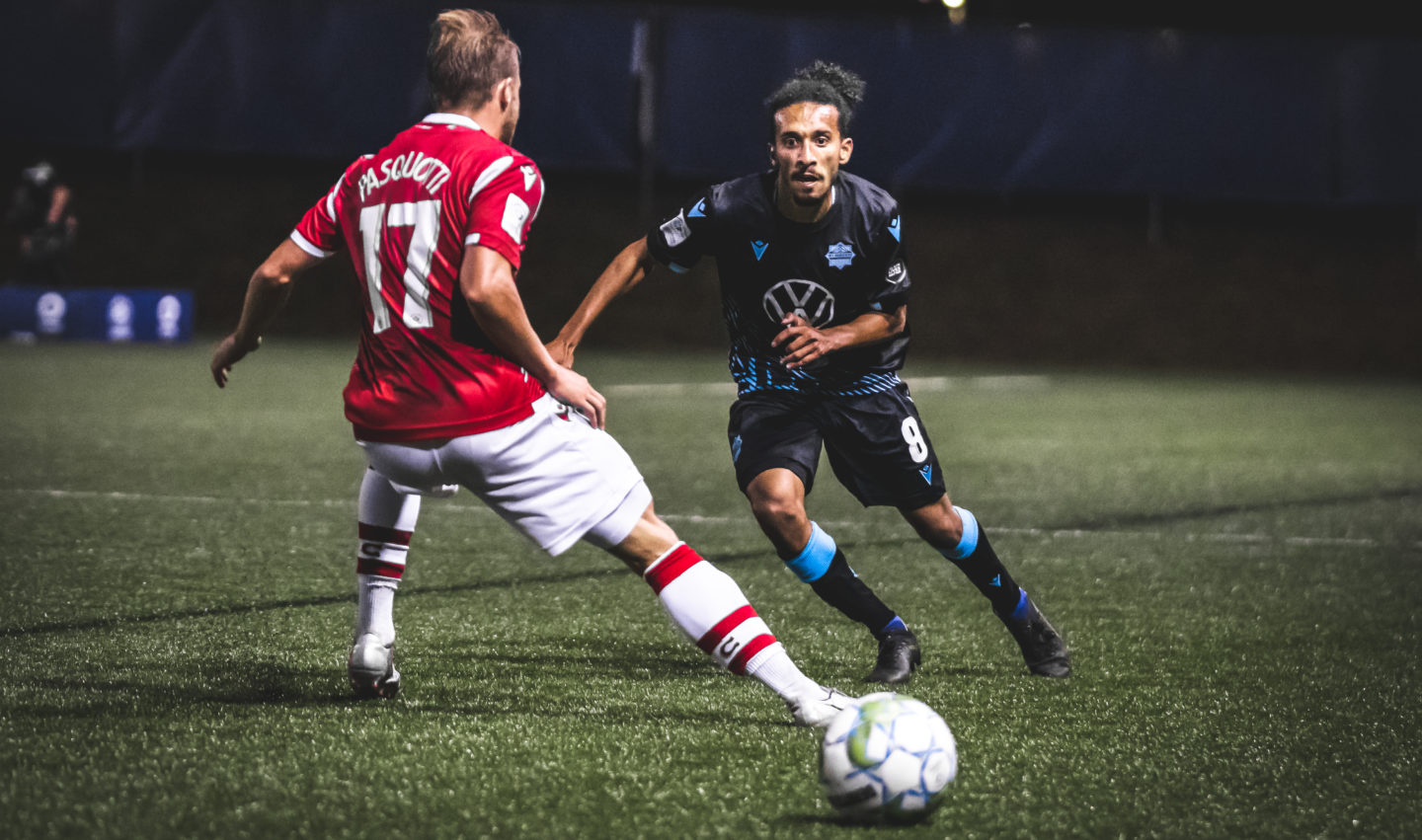 Omar Kreim has eyes for the ball against Cavalry FC. Photo: Chant Photography
Wanderers’ Omar Kreim: ‘We need to change our minds on how we see things’
2021-01-10
by
Dylan Lawrence, CanPL.ca contributor
News

In the short history of HFX Wanderers FC, there are already a couple of pivotal moments that fans will remember for years to come.

In the team’s fourth match at The Island Games, Omar Kreim scored an equalizing goal in extra-time to earn his team a very important point, arguably one of the most important results that contributed to the Wanderers’ impressive second-place finish.

Kreim was coming off an impressive four-year run with his alma mater l’Université de Montréal, where he won a national championship in 2018, before signing with the Wanderers ahead of last season.

Omar spoke with CanPL.ca contributor Dylan Lawrence about the 2020 campaign and to look ahead.

How has your experience as a Wanderer been so far?

OK: With everything that’s happening, I expected something worse than that. I was thinking we wouldn’t play (last) year. So having The Island Games and to be able to play my first pro games I think it was better than I was expecting.

What’s been your favourite moment in a Wanderers shirt?

OK: I would say when we tied against York9 at the end (of the game). I think personally that was my best moment, so I think that was a good one.

What was going through your head when approaching that free kick?

OK: Honestly when I have these types of free kicks on the side, I try to put it on the second post and if someone is able to touch it, they can score, and if they don’t – sometimes goalkeepers like to cheat to go for the cross and that’s what happened. The goalkeeper cheated. I’ve done it a few times before but it’s also luck.

What do you think that moment meant for the team?

OK: It was huge. I remember coming into the game and we were one man behind and one goal behind. The objective was to keep the score at 1-0 until the last minutes. When I came onto the pitch we knew to push it at the end and that’s what we did. If you look at the end of the game we had a lot of chances.

I could only imagine what that moment would have been like at the Wanderers Grounds. Although you haven’t had the chance to play there, you met some of the supporters. How was that experience?

OK: Honestly I’ve been surprised because just walking on the streets with my Wanderers jacket some people told me they were watching and that we did great. Even a city like Montreal and the guys who played for the (Montreal) Impact, they don’t get this recognition. So just to be able to talk with the fans and they show us some love, I’m pretty excited for next year and if we can play in front of the fans.

In your first year being a professional footballer you played with Aboubacar Sissoko, who was also in his first year. How was it having that sense of familiarity?

OK: It felt really good. I’ve played with Abou the last four or five years. We’ve passed through similar moments at University. Our first year was (not great), after that we started improving personally and with the team. Finishing our University career with a pro contract and being able to go to the same club and at the same time was amazing for me and also Abou – we are very complimentary. He can win a lot of balls and I’m more like a player that can make the last pass or get the goal.

At the Island Games, you were involved in some social justice initiatives. Could you tell me more about your involvement?

OK: As the players, we knew we had to do something. We can’t just watch – we’re players but we’re also people and need to be involved with social issues and injustice. What happened was we decided to do something with just us and the league. We had some meetings and we decided to (take a knee) before the Cavalry against Ottawa game. It was a pretty good (idea) but we need to do more. In the next few months, next few years we need to do more. It’s not one thing and then we don’t have to. It’s something we have to keep up with and I know we will in the future.

I asked you if there was anything you could change in the world, what would it be? You told me ‘minds, and minds can change the world’. Could you tell me more about that idea?

With this in mind and with the uncertainty around COVID-19, how are you planning to approach 2021?

OK: With positivity, I hope it’s going to be a better year. But we have to be conscious that maybe it won’t be the year that almost everyone’s saying it’s going to be – a better year than 2020. But maybe it’s not going to be a better year so we need to change our minds on how we see things – yeah maybe things could be better with the vaccines. But we can’t expect that for sure it will be better. So for me I hope to (take action) to show everybody that yes, we have this virus, but there are some things worse than that. People are suffering everyday with problems bigger (than ours). To put the spotlight on these issues is something important to me. With soccer I think I’d just like to have a better year than this year on the field – the goal is always to improve. So for me, I want to be a better person and a better player every year, so that’s the goal.