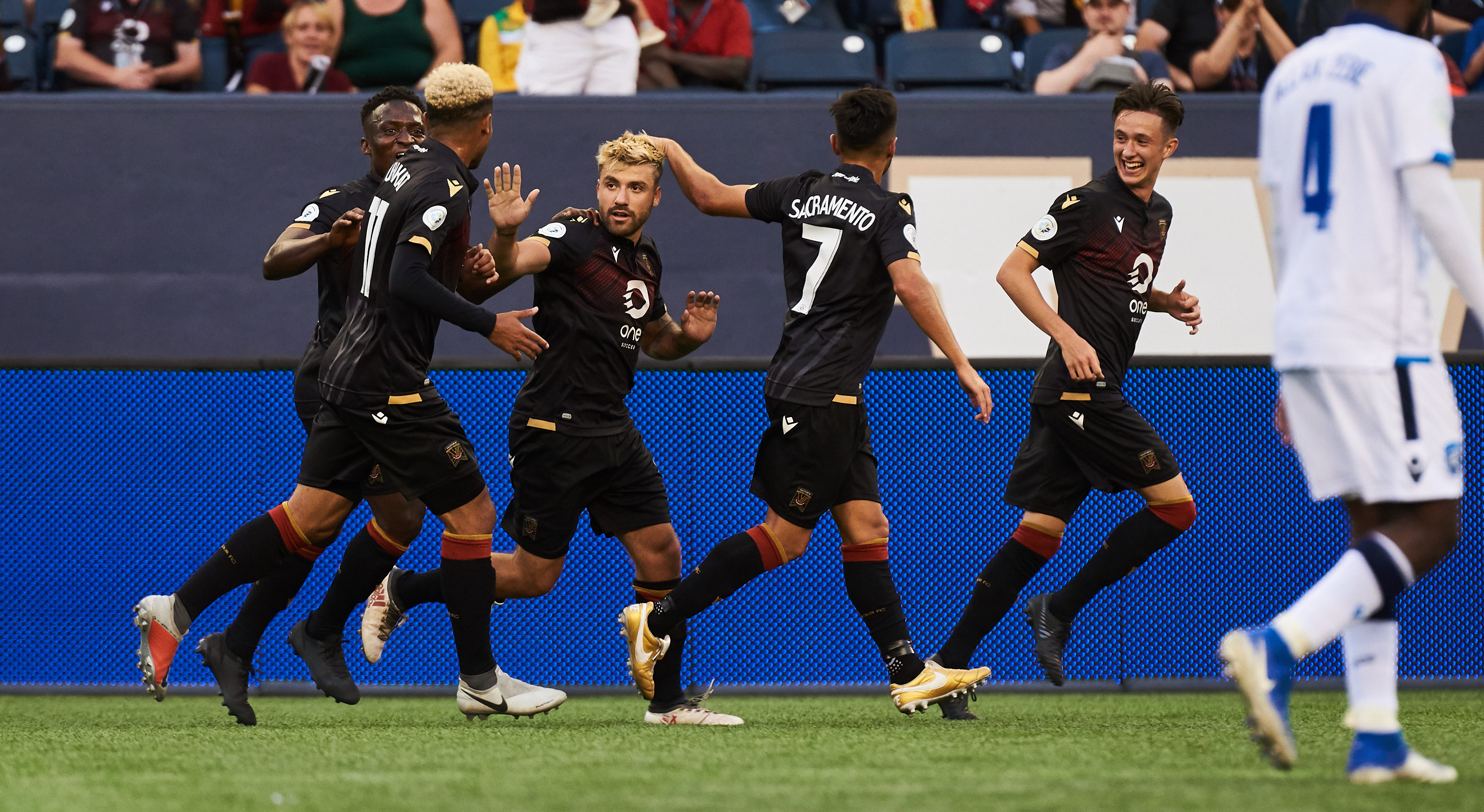 WINNIPEG – The number four comes up a lot when you break down Valour FC’s 3-1 victory over FC Edmonton on a Monday night in Winnipeg.

It’s the number of goals in this particular match, sure, but also the consecutive number of home matches where Valour has converted a penalty kick. It’s how many goals Michael Petrasso has scored from the spot, too, and his latest came in this, the fourth meeting between Valour and FC Edmonton.

It’s also the number of players in the Valour backline at the start of the match.

Whatever was said in the home dressing room at the half, Valour made adjustments, switching from their usual 4-2-3-1 formation into a 3-5-2 in the hopes that this tactical change would take advantage of what Rob Gale was seeing on the touchlines from the first 45 minutes of play.

“We felt if we just got higher up and played Bustos as a No. 10, we could cause a lot of trouble,” Gale told reporters after the match. “We got on the front foot and were excellent. They stepped up. To deliver a second half performance like that was excellent.”

While Petrasso’s penalty levelled the score for Valour, it was Louis Beland-Goyette’s absolute screamer that brought the crowd at IG Field to their feet at long last. Known as a defensive midfielder, the Quebec native blasted a shot into the top corner from well outside the box, leaving the visitors stunned, and, suddenly, down 2-1.

“I’m more happy from the reaction this goal caused from the team – we came out stronger after that,” Beland-Goyette said, adding that it was extra special to score the winning goal in Valour’s first home victory since May 11. “I’ve never seen fans like that, behind the team like this. It’s been rough for them so we tried to bring them a win at home and they can enjoy this.”

The hope now is that the goal by Beland-Goyette, and the comeback he helped spur on, can serve as a statement for the rest of Valour’s season.

“We have that winning spirit now,” he said. “We go down at half on a mistake and forget quickly,regroup and come out way stronger than them in the second half.”

Marco Bustos would put the match out of reach with a highlight worthy goal of his own. Some smooth moves on the ball led him into the box where he slotted home his club’s third goal.

“We said to all our midfielders that for the talent they got we’re not scoring enough goals,” Gale affirmed. “I thought the first half we didn’t shoot enough so we said to take more shots; we felt we could create havoc and fortunately we did.”

Add in that this was a second match in two days, and Valour will be pleased with the bounce-back, having been on the losing end of a 3-1 result on Saturday against Forge … and starting eight players that also started about 48 hours prior.

“With the schedule, for them to be a goal down in the second half, I don’t think two many people were saying Valour is going to come out with a three goal bonanza,” Gale said. “And to have the energy to take it to the opposition so I was really pleased that they applied the game plan.”