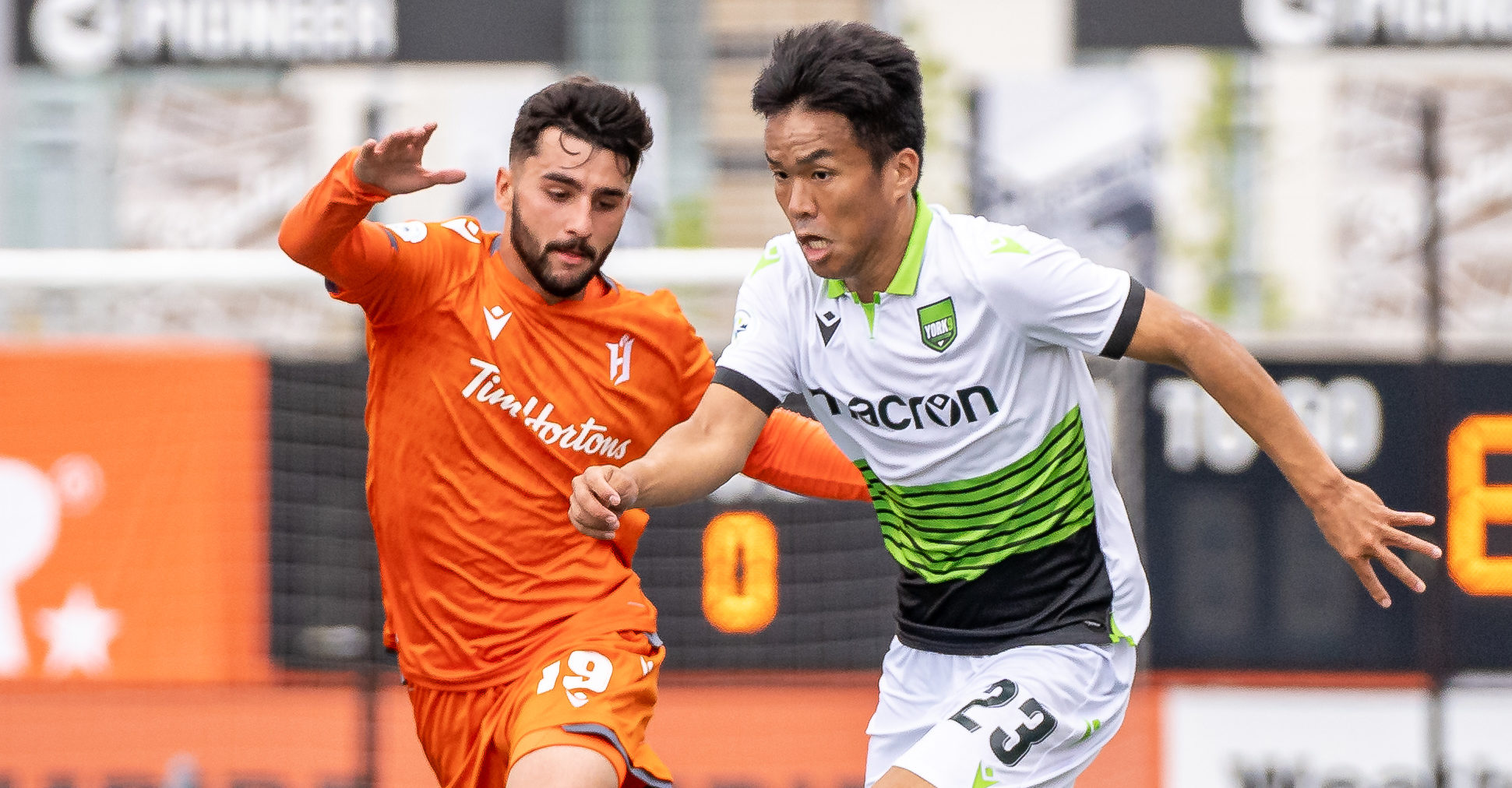 YORK REGION – It’s back to where it all began for York9 FC.

With their 2019 Canadian Premier League aspirations ended prematurely last weekend, the Nine Stripes return to where the inaugural campaign kicked off on Sunday with a trip down the highway to Hamilton for a clash against Forge FC.

It was a 1-1 draw against Cavalry FC on Saturday that officially eliminated Jimmy Brennan’s outfit from any path to a spot in the Canadian Premier League Finals this season.

“It’s tough, obviously. The whole point of being competitive is to win games and get a championship,” said Y9 fullback Morey Doner. “The mathematics … yeah, we’re out of it. It’s a blow.

“We’ve set ourselves to come third; that’s what we’re trying to do for the rest of the season.”

York9 entered the weekend in possession of third place, a point ahead of Pacific FC and Valour FC, and two points ahead of FC Edmonton, with a game in hand over all three.

Despite the disappointment, motivation has not been an issue for Brennan’s side. With four matches left, Brennan wants his side to continue working on everything they’ve been working on this season.

“The motivation is always going to be there to play pro football,” Brennan affirmed. “We’ve had a good week of training, prepared right, we’ll go there and try to put on a show.”

He urged his team to “continue that work ethic, and continue to improve,” adding: “This is our first year with this bunch. We’ve taken 23 guys, put them all together, said, ‘OK, here’s our style, here’s our philosophy, this is what we’re going to do.’

“We’d like to be a little more consistent; there is always room to improve. These last four games, absolutely we want to win them, finish in third-place. We won’t stop working.”

Players are fighting for jobs, scrapping for playing time. Plans for the 2020 CPL season are beginning to stir.

“Over the next couple of games we’ll start looking at getting those guys who haven’t played too much some time, see where they are, and see what they can do,” said Brennan, who anticipates a difficult look to the league come year two.

“Next season we’ll have a core,” he forecasted. “With Cavalry and Forge, they had a core, and just added a few pieces to their team, whereas [after] this year, the rest of us, we’ll have our core. We’ve got to add a couple more players to continue to get better.”

But that will have to wait, as this year’s champion hasn’t even been decided yet.

The two Ontario rivals have met three times in league play thus far. They drew 1-1 on opening day at Tim Horton’s Field, but then Forge came to York Lions Stadium to spoil the Nine Stripes’ home opener with a 2-0 win. And last month once more in Hamilton, Forge continued their unbeaten stretch in the series with a 2-1 home win.

“They’re a good side,” said Brennan. “They’re organized, they’re good on the counter. Bobby [Smyrniotis] has got a good bunch of players there. They’ve made it difficult for us, even in our home opener here.

“It’s going to be up to us to go there and disrupt them.”

Doner highlighted the Forge duo of Tristan Borges and Kyle Bekker as keys to focus on: “We have to be sure that Borges and Bekker are limited. When they have a lot of space to attack areas, that’s when their team thrives and their team gives them the ball in good situations.

“We need to limit those and get the ball, play what we like to play.”

Though the Ontario derby has had some bite to it already, Doner thinks time will make it even more appetizing.

“I felt it at the beginning: my professional debut was here at home in the 905 derby, it was great to be a part of that,” said the full-back, who has appeared in every match since that first showing in May. “A derby is over time. Two losses and a tie, we’d like to get some wins on their turf. With our fans there tomorrow, we really want to make something happen.

As Forge battles with Cavalry for the Fall champion’s crown ahead of the two-legged final that will follow the regular season, York can still put their stamp on how the season plays out.

Sunday is the first of two York-Forge matches this month. Should they slow the progress of their provincial rivals, Cavalry, who trail by four points heading into the weekend, may be able to leapfrog into first place and claim both halves of the season.

Not that the chance to play spoilers offers much salvation.

“We want to finish the season on a high, on a good run and carry that momentum into next season,” said Brennan. “If we stop them from getting it, then Cavalry gets it.

“Whoever gets it, I’m not really bothered. I’m more concerned about us.”

Added Doner: “We just need to focus on us, doing the small things right, not giving the ball away in cheap areas, making sure that we keep hold of the ball and use the wide areas to relieve some pressure because we know they’re going to have a lot of the ball,” he detailed. “Just do the right things.

“We don’t want them to win the league against us. We’re looking to get three points and focus on ourselves for the rest of the season.”