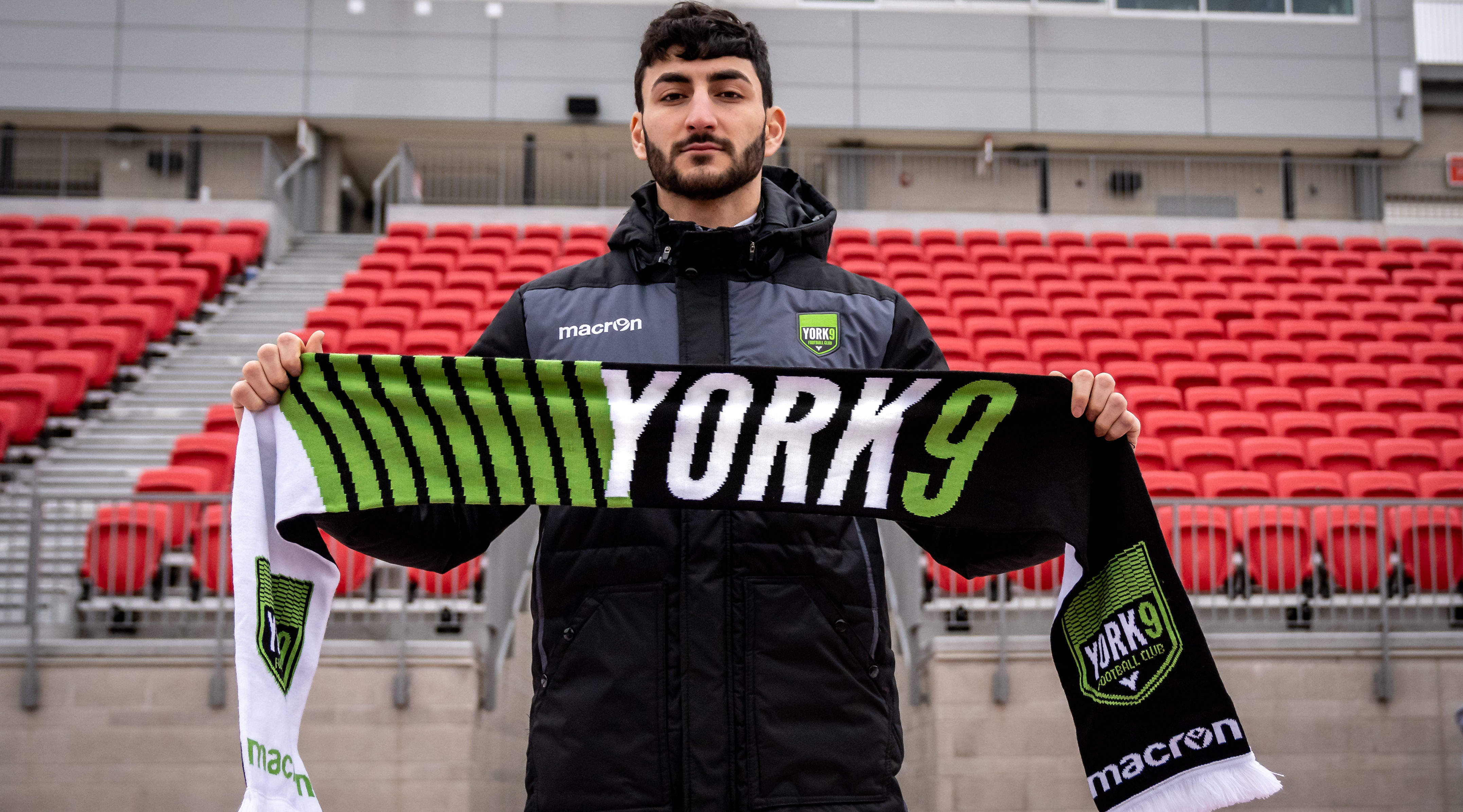 Chris Mannella’s move to York9 FC might not have materialized if not for a series of recent developments in Ottawa, but his addition is set to bolster the Nine Stripes’ lineup in a major way in 2020.

The 25-year-old midfielder — yes, midfielder, a no. 6 specifically, as he clarified to CanPL.ca — returns home after spending the last two seasons in Ottawa, where he went from a young prospect out of Toronto FC to being one of the most important players in the Fury lineup.

He joins the CPL club ahead of the 2020 season ready to continue his growth and help his new teammates do the same. Luckily for him and Y9, his transition shouldn’t be too tricky.

“I’m excited I don’t have to learn the city,” Mannella offered coolly in a sit-down interview with CanPL.ca. “I know it like the back of my hand.”

Indeed, Mannella, who grew up in Little Italy in downtown Toronto, is more than familiar with York Region and the sort of shopping on offer at Vaughan Mills, one of his personal favourites.

Having come through the Toronto FC academy from a young age and graduated to the senior ranks in 2014, Mannella is no stranger to the Greater Toronto Area. But, when his short time with the Reds’ first team was up, there weren’t many other options available for him to pursue in Canada.

It’s why Mannella credits the Ottawa Fury for offering him a chance in the form of a starting role — and all of the responsibilities it comes with — at a competitive level, while remaining relatively close to home. At the time, the Fury was the only club of its kind available to him. He speaks highly of the organization, as such, explaining that general manager Julian de Guzman and the rest of the Fury staff “had a lot of faith” in him, and afforded him plenty of playing time, “which any player wants and needs.”

He recalls the highs of his debut at TD Place in 2018 and the lows of losing a playoff play-in game on penalties earlier this year, but added that the sum of his experiences in the nation’s capital were nothing but positive.

“The Ottawa Fury,” Mannella remarks, “was a staple for Canadian soccer.”

But, he adds: “At the end of this season, we didn’t know what was going to happen, what the fate of the club was. We really had no clue.”

Come the end of 2019, the club announced it would be ceasing operations and, later, news emerged that the club’s USL spot was sold to Miami FC. It makes Mannella’s move to the CPL the first of its kind, and continues to fulfill the mission of the league: offering the country’s top talent a home.

“Who would have thought that Canada would have its own league three or two years ago, or even a year ago?” Mannella pondered. “Nobody really ever thought the level would be this high and the fans would be this involved and everything around the game would have been this important to people all across Canada? It’s absolutely incredible.

“If I look back even to when I signed my first professional contract, the only way to go was through the academy system straight into the first team in MLS, and obviously that didn’t work for everyone. We saw guys fizzle out and not further their careers.

“What this opportunity with the CPL does is gives everyone an opportunity to play at the highest level they can and they can be a professional. That’s very enticing for a young kid coming up because it’s a path they can actually see and it’s quite attainable. They can work towards it every single day at their club or alone in their backyards.

“It’s massive for Canada as a whole because we’ve also seen guys even get called up into the national team so it’s important that we have this league. I’m happy and grateful to everyone that was behind this and got it off the ground.”

That last point — CPL players earning national team nods for their performances in the inaugural season — was also a big motivation for Mannella when deciding on his next step. Having earned a call-up of his own in 2015 and with three caps to his name, Mannella is hoping to achieve the same in 2020.

“You look around dressing rooms and ask any of the Canadians, you ask them what they want to do, it’s the shared goal; play for the national team and put on that jersey. For me it’s about having the best season possible and doing whatever I can on the pitch to hopefully catch the eye of John Herdman and the staff and one day get my call-up and put on that jersey again,” Mannella said.

So, to the meat and potatoes: Why York9? Besides the obvious benefit of coming back home, a few key conversations got this particular ball rolling for Mannella.

“I know a lot of the guys in the locker room, familiar faces,” Mannella explained. “I’ve played with a bunch of them. Manu (Aparicio) is one of my good friends — we grew up together playing in midfield so that was a big pull. I know Jimmy (Brennan) as well; he was my coach in the TFC academy when I was only 15. Having him behind me now and working with him again was obviously a draw to come back home and further my career.

“I spoke to Manny quite a bit and he gave me the insight of everything, the rundown for how the club works, and he had high praises for everyone involved and that stood out for me. I spoke to Jimmy here and there too, and he watched some of the Ottawa games so we reconnected. But it was more with Manny from a friendship basis where we ran things down.”

Mannella isn’t ready to take it easy playing in familiar territory, though; he’s ready to bring the sort of professionalism and drive to training sessions and match days that made him such a star in Ottawa.

And he’s setting clear goals for success, too.

“We’re coming for the title and nothing else,” Mannella affirmed. “With the core group of guys that Jimmy and the club has kept, we’re in for a treat because we’re ready. We’re going to go balls to the wall right away. We’re going for the championship.”

A taste of CPL action

While Mannella will have to wait for a few more months before making his Y9 debut, this won’t be his first taste of CPL action.

Having squared off against HFX Wanderers FC in the 2019 Canadian Championship, Mannella has already had first-hand exposure to one of the CPL’s most electric atmospheres.

“The level of play (against HFX) was fantastic,” Mannella recalled. “It was what we expected, because we did our film and studied the club and the players, and they were fantastic. It was a very good group of players. In terms of the atmosphere, also incredible. Looking around the stadium and seeing how involved the fans were was something really good to see: Canadian fans pushing their Canadian club forward in a game that may be like third in the pecking order for a lot of people. It was really good to see.

“I was really happy to be a part of that two-legged battle.”

He added: “The fans were incredible. They were jeering us! I have one particular moment when one of our centre-backs was down and I was just looking around and they’re giving it to me fully. I was so happy to see the fans care so much and were backing their club so much that they would say or do anything. It emulates a lot of European clubs and I was quite happy to see that I was happening here in our own country. It was amazing.”

Playing in the USL, as Mannella explained, meant travelling to “a lot of these little cities in the U.S.” — as such, he hasn’t had a chance to explore much of Canada, a prospect he’s looking forward to experiencing with York9 FC.

One particular trip he’s looking forward to, though?

“Halifax is on my list again,” Mannella offered. “The fans were so incredible it made you want to play and made you want to try and keep them quiet, so you push yourself. I want to go back to Halifax for sure.”