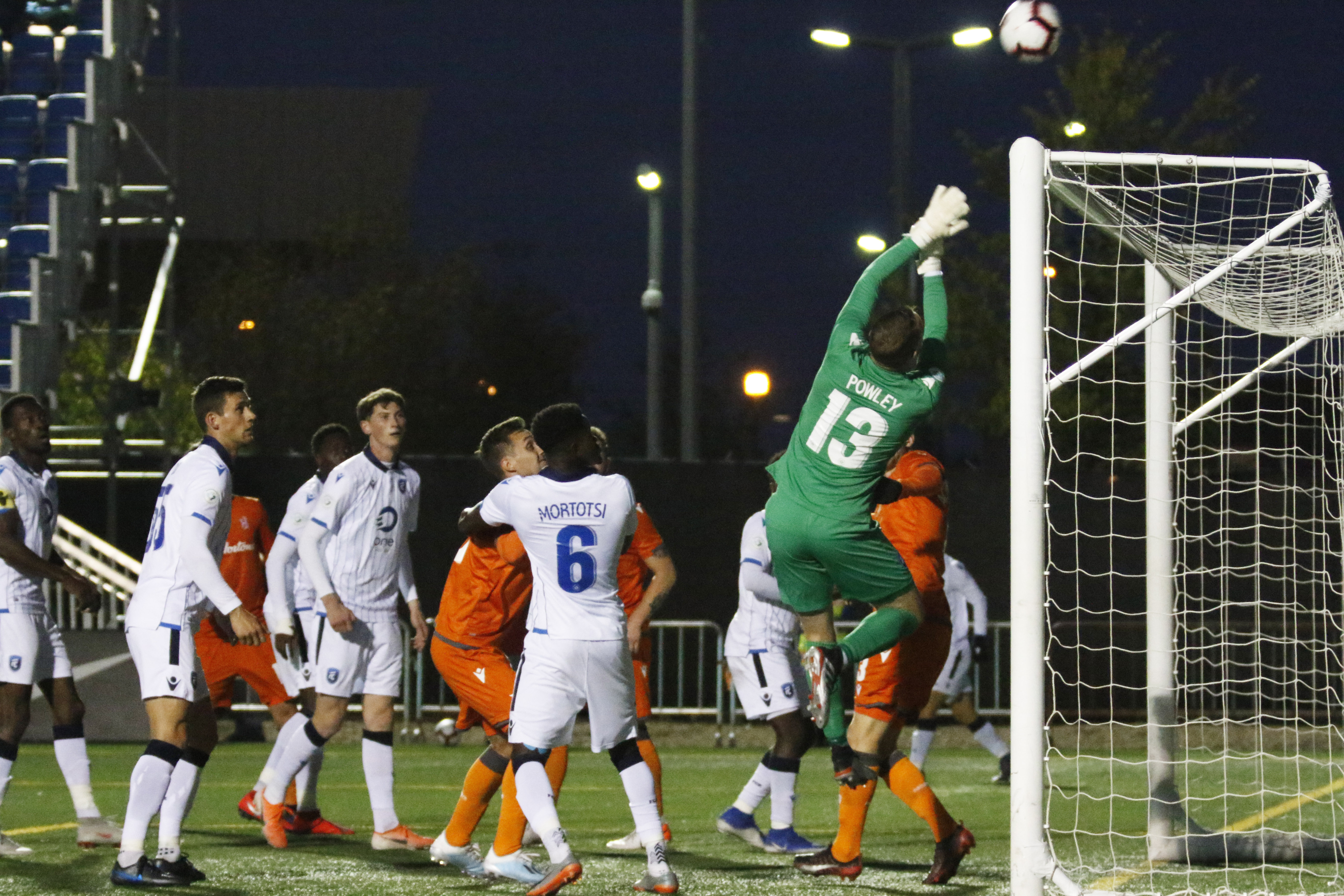 Klaidi Cela’s first Canadian Premier League goal was the difference, as Forge went into a chilly Clarke Field on Wednesday evening and squeaked out a 1-0 victory, breaking a three-game winless skid against FCE that dated back to the Spring season.

“One of the things we talked about coming into this match was that they’re a team that’s given us some difficulties, especially playing here,” said Forge coach Bobby Smyrniotis. “Not only is it important for us to get the three points for where we are in the standings, but we wanted to get a positive result against a team that’s given us a tough time.”

FCE coach Jeff Paulus said that his side was content to let Forge, who he says “play the best football in the league” have the ball in its own third, and then make it tough for the visitors to get through the two lines of Edmonton’s defenders. The medium block has proven successful in the past against Forge.

But Forge spent some extra time in the video room looking at ways to deal with FCE. The visitors went into this game with an all-business mentality, and the booming loud victory music coming from the visitors’ dressing room after the game showed just how much winning in Edmonton meant to the men in orange.

“We’ve struggled here in the past, we’ve done a lot of video on these guys and thing we need to work on,” said Cela.

“The way we approached this game was overloading the flanks, and that created more space inside, we had our wingers tuck in and our number 10, and I believe that was big factor in today’s game.”

Hmm. Overloading the flanks. That sounds a lot like a Tommy Wheeldon Jr. strategy — and it’s interesting that Cavalry hasn’t lost to FCE this season. Did Forge borrow a page out of the playbook of their Calgary rivals in order to beat Edmonton?

While Cela could celebrate his first goal, FCE keeper Dylon Powley shoulders a lot of the blame. In the 25th minute, Powley was well positioned to catch a corner kick from Kyle Bekker. But, like a punt returner muffing a fair-catch attempt, the ball spilled out of Powley’s hands and created a scramble in the Eddies’ penalty area. After a few ricochets in the human pinball machine, the ball fell to Cela, who blasted the ball into the net.

“It’s a young keeper, he had a good game in his start in Halifax (Saturday),” said FCE coach Jeff Paulus. “It’s different playing at home, he’s playing in front of the supporters group as well, right there, and that’s the first ball he’s had to deal with. It’s a cold night, and it’s one he wants back I’m sure.”

The goal came a little more than 10 minutes after the home team had a wonderful chance to open the scoring. After a great run by Allan Zebie down the left wing, the ball was funneled into the middle for Edem Mortotsi, who had a clear sight at goal. But Forge keeper Quillan Roberts was equal to the challenge, getting low to the turf to make the save.

Powley did somewhat atone for the drop with a quartet of good saves in the second half. He got low to stop a near-post drive from Marcel Zajac, and then dove to get a hand to a shot from Tristan Borges, who came in as a second-half sub. He then made a leaping stop to deny Borges again, from a shot that looked to be labelled for a spot just under the crossbar. And then, Borges, again, stopped from close range by Powley’s trailing foot.

Forge coach Bobby Smyrniotis left Borges, fullback Kwame Awuah and defenders David Edgar and Bertrand Owundi on the bench to start the game. But, even though Borges — challenging for the league scoring title —didn’t feature till the second half, he had plenty of good looks, possibly a series of warning shots for Cavalry.

“In the second half, though, as we’re pressing, you open yourself to the counterattack,” said Paulus. “And (Powley) made some big saves to give us a chance to get the equalizer. He’s fought his way back into that game. It’s a good character-builder for him.”