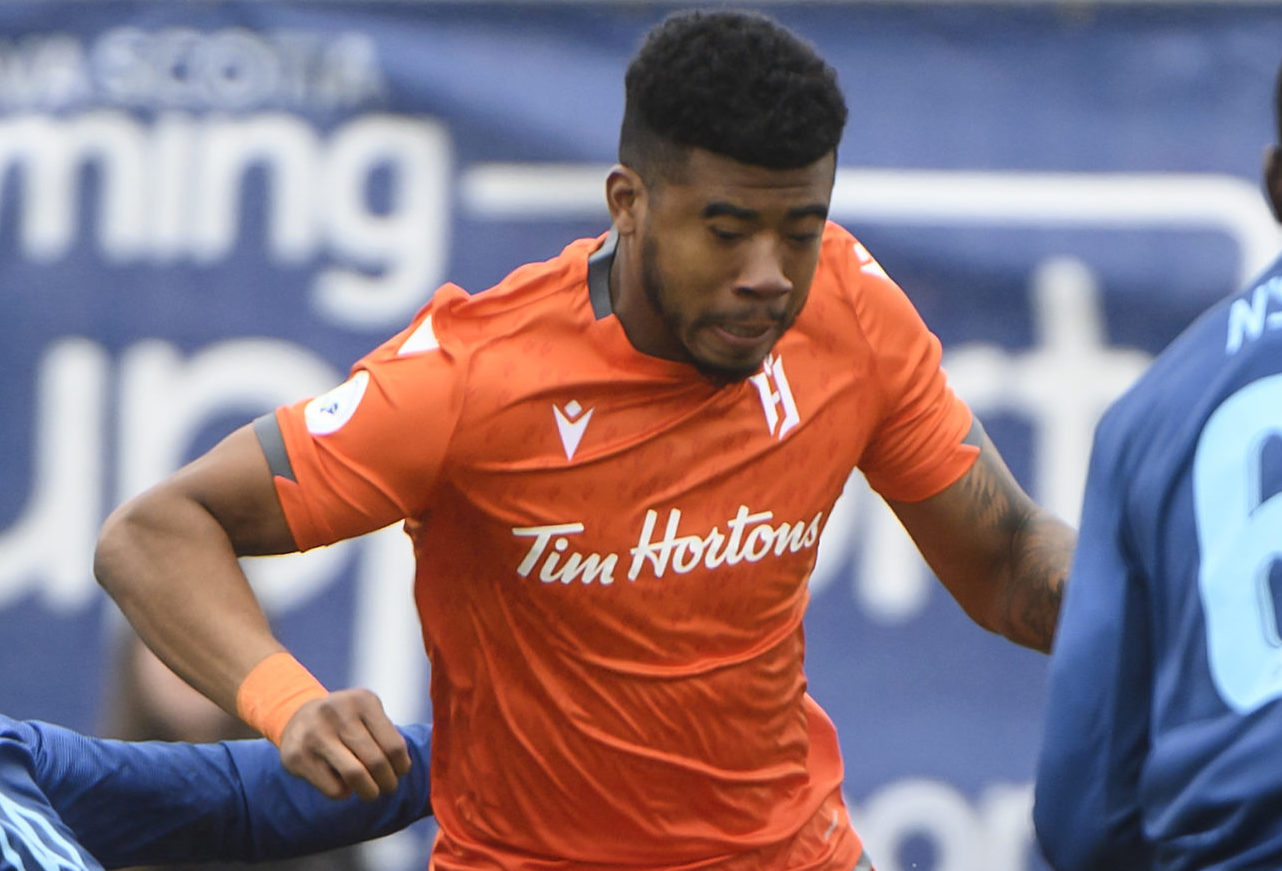 Forge FC's Emery Welshman (C) battles with HFX Wanderers FC's Elton John (L) and Chrisnovic N'Sa for the ball during the first half of Canadian Premier League action at Wanderers Grounds in Halifax on Saturday, May 4, 2019. (Photo: Darren Calabrese/CPL).
Which CPL club has the toughest path to CanChamp final?
2019-02-13
by
James Grossi, CanPL.ca contributor
Canadian Championship

The draw has been held, the pathways are set.

While there are plenty of unknowns, preliminary evaluations can be made on which club appears to have the easiest path to the semifinal and beyond, and which has the hardest.

Before digging in, a qualifier: for the purposes of this thought experiment, though an MLS side could be knocked out at the third qualifying stage, the most complicated scenario will see them lay in the path of a given CPL side at the semi-final stage.

Here are the most difficult paths, in descending order of difficulty:

Entering in the second qualifying round, the Winnipeg-based club will have one fewer match-up than some of the other CPL teams, while their relatively central location means that even the potential of a long midweek trip to Halifax is not as depressing as it would be for other western sides.

With all four possible opponents based to the east, Rob Gale’s side will be spared some of the most troublesome travel that awaits those later down the ranking.

Should they progress past that first match, a date with Ottawa in the next round spares them a clash with an MLS opponent at that stage, though with Toronto looming that benefit dissipates come the semifinal.

Like Valour, HFX has been spared some of the harshest possible midweek travel with that second qualifying round visit to their CPL cousins in Winnipeg the farthest possible date.

An opening round clash with League1 Ontario’s Vaughan will be a good test, giving the Nova Scotian representatives an early taste of the competition, which could come in handy in that second round all-CPL clash.

Then, should Stephen Hart’s group progress past Valour it, too, would be spared matches against either of the MLS sides that enter in that third qualifying round. But again, the three-time defending champions, TFC, would lie in the way come the semi-final.

Entering the tournament at the earliest possible stage means York9 will also have to get through four different two-legged series in order to reach the final. That is a double-edged sword: the extra matches will pinch on the schedule, but that chance to get off to a good start and build some momentum in the Cup should not be discounted.

Like HFX, Jim Brennan’s charges start off against lower league opposition in PLSQ representatives Blainville – a nice Ontario-Quebec clash to wet the whistle, while the second round, should they progress, will see them make the lengthy trip to Alberta to face Edmonton.

From there, the possibility of meeting two MLS sides en route to the final – a third round clash with Montreal before a semifinal one against the winners of the series that involves Vancouver (never mind the trip to British Columbia) – adds a further wrinkle.

With virtually the same path, Cavalry and Pacific will face similar obstacles as they navigate their first foray into the Canadian Championship.

Not only must they face-off in the only all-CPL match in the first round, but their path also includes the full gambit of four series en route to the final.

What gives Tommy Wheeldon Jr.’s side the slight edge is that the crucial second round trip to Hamilton to face Forge is a touch kinder, on paper at least, than the added travel the BC-based side will have to navigate.

Both sides must run the gauntlet of both Whitecaps FC and the Impact should they hope for a chance to lift the Voyageurs Cup.

It is not just the distance that adds a further element of difficulty to Pacific’s path.

Should they get past a pair of CPL sides in Cavalry and Forge in the first two rounds, a first-ever provincial derby against Vancouver is perhaps the most alluring possibility of the opening three qualifying rounds.

Though that extra element counts against Michael Silberbauer’s side in this figuring, it should be remembered that just as in Cup play, whenever a derby comes around upsets are always possible.

Set to begin in the second qualifying round, Edmonton will be spared the extra wear and tear, but the distances they will have to cover, with trips to Ontario and Quebec through the first two opponents will be an obstacle.

Should they win that first series, Jeff Paulus’ team must contend with three-time champions (in the competitions’ current guise/nine all told) Montreal, who will be eager to end their four-year Cup drought and make a return to the Concacaf Champions League in 2020, having been runners-up in the 2014-15 edition.

Then, would come a date with Vancouver and their new coach, Marc Dos Santos, who will similarly be looking forward to making a mark on this competition in his first year at the helm.

Forge FC has arguably the toughest path to the final. Where Bobby Smyrniotis’ side has one fewer hurdle to overcome than some of the clubs considered to have easier paths, the sheer distance they must cover through those first two series will be daunting.

Regardless of whether Cavalry or Pacific emerges, Forge will have one of the longest trips of the tournament in that first tie, while a date with Vancouver – just as trying a trip – will lie ahead in the next round.

Add in a possible meeting with a second MLS side in the semifinals and the Hamilton-based Forge will have their work cut out for them.