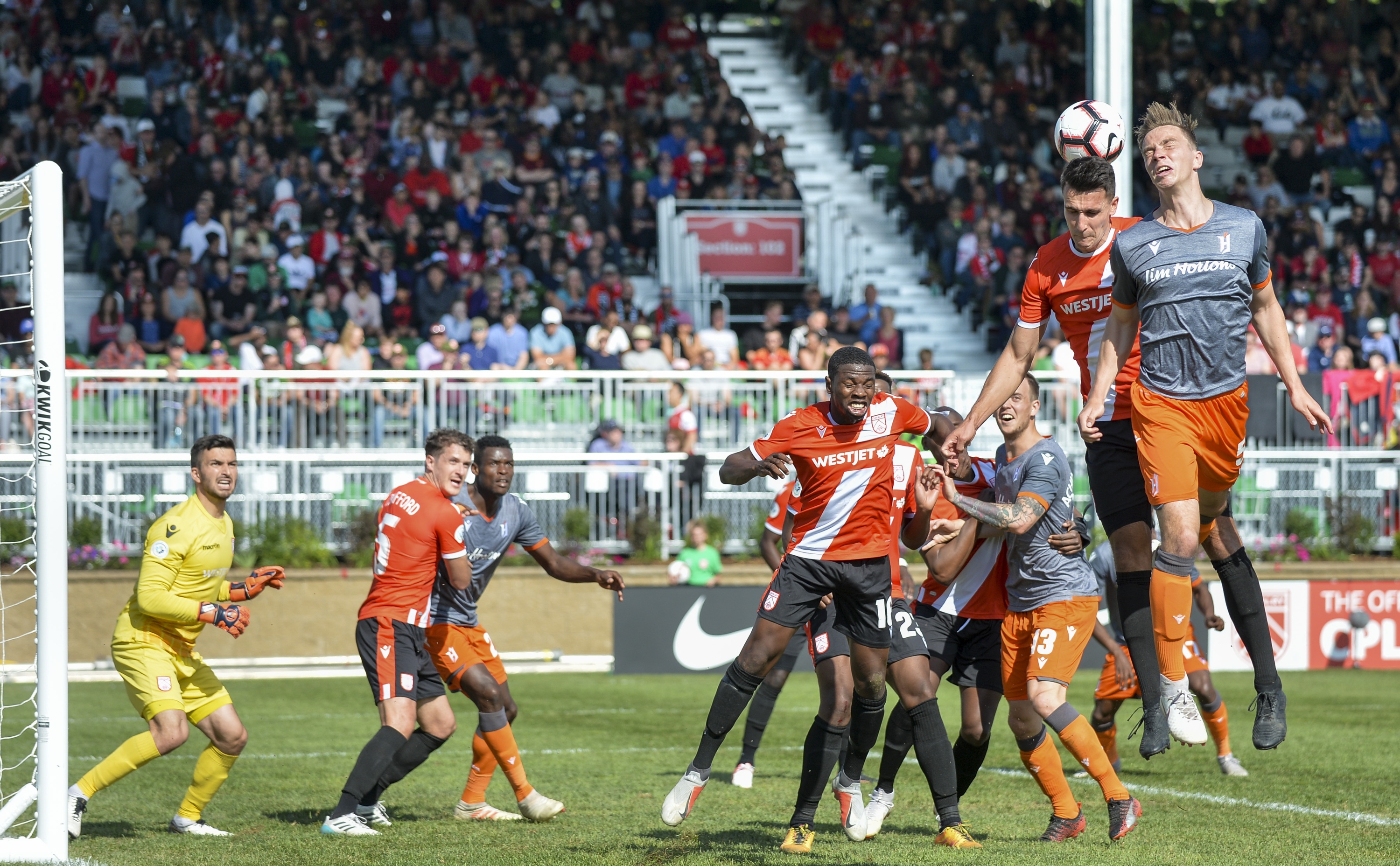 When two sides meet as regularly as Cavalry FC and Forge FC did in the inaugural CPL season, it’s incredibly difficult for coaches to find anything new with which to surprise the opponent.

By this stage, Cavalry and Forge have shapeshifted their formations in open play more times than a comic book villain. And, well, of course they could.

Cavalry and Forge – with the strong foundation of pre-existing rosters moulded under their current coaches as either Calgary Foothills in PDL competition or Sigma FC in League1 Ontario – arrived for the 2019 CPL season as the two most tactically flexible sides, clear in their identity, and largely far more the finished article than their competitors.

The layer of polish on both teams meant that one week they could steamroll an opponent with a well-honed system of play, and another week completely overhaul their approach to match up better with another opponent. And they could do all of this with players in changed roles or positions, and without fear of disrupting on-field chemistry by being too reactionary.

Such is the benefit of having history: Tommy Wheeldon Jr. and Bobby Smyrniotis have been carving out and shaping the character, philosophy, and principles of play in their two sides for many years.

The thing is that when two big sides are as familiar with their opposition as Cavalry and Forge, the traditional four moments of play can be reduced to a series of pre-set pantomime: attack phases are nullified by defensive phases custom-armoured against specific points of vulnerability; movements in transition are by design directed towards well-established zones.

Ahead of the two-legged Canadian Premier League Finals, you can bet that all the tactical angles have been weighed and dissected to death by in-house video analysts and technical staff. It’s going to take something special for these two teams to find a viable breakthrough.

In fact, the best live threat may prove to be a dead ball, and in this regard, Cavlary are already best in show. With 18 goals from set-pieces in the 2019 season, Cavalry have five more than any other CPL side. But Cavalry’s set-pieces are a bit like the proverbial iceberg: it’s not even the bit you’re looking at, but what is lurking that is the most dangerous.

While some teams can be very good at creating openings in the first phase of a set-piece – finding height mis-matches, having decoy runs to free up a target or block opponent man-marks, or by changing the position of the ball with flicks or dummies (and Cavalry effectively use all of these methods in the box) – the most likely outcome on a set-piece is a successful defensive clearance.

Let’s face it: the defending team is usually in a good position to see what the attacking team is trying to do and has a pre-planned solution. Yet, Cavalry consistently tip the odds in their favour, creating multiple chances from attacking set-pieces, or at the very least ensuring the ball drops into zones with a traditionally high XG (expected goals) metric several times within a single move.

So how do they do this? To understand, one needs to be able to break down a set-piece to various phases.

The first phase of a set-piece is exactly what it sounds like: the first instance when a ball is sent in and players attempt to score immediately or, at least, before the ball can be cleared. Yet, the XG metric on a corner kick, free kick, or direct attacking long throw-in is lessened by a number of factors: a) the variable quality and angle of the service, b) the static and organized nature of the defensive team, and c) the unknown exact location and timing of the incoming ball for the attacking team to strike and finish. In short, the first chance is often the toughest to finish.

However, the second, third or even fourth phases of a set-piece (more phases are possible, but naturally grow in statistical unlikelihood) offer a much different look. These phases are initiated when the defending team successfully clears the first ball, but the attacking team regains possession and can again (and sometimes again, and again and again) serve the ball back into a dangerous area. In doing so, the attackers can also change the angle and type of service to create various types of attack. It’s in this category that Cavalry excel.

A team that is good at creating multiple phases in a set-piece is effectively creating a pressure-cooker in the opponent’s box. Within a short period of time, opposing defenders will be forced into split-second decisions either to move their lines forward and support a possible counter or to stay and defend a lingering unit of attackers. They must constantly recalculate and assess risk. If done properly by the attacking team, this hyper-loop of actions will create moments of indecision on the part of the defenders, disrupting their shape and organization, and seriously increasing the odds of a scoring chance. All of this from just one dead ball and a well-organized repress.

As Cavalry’s right-sided forward Nico Pasquotti aptly summarized in a recent pitch-side interview about their set-piece strategy: “We just look to create chaos and win second balls.” Over 90 minutes, this is indeed hell for defenders.

So why doesn’t every team use this method? As with most aspects of the game, it’s a question of personnel. Cavalry’s attacking set-pieces are manufactured from three classic situations: long throws, corner kicks and free kicks inside the opponent’s half. To begin with, Cavalry has excellent personnel to provide service in each of these situations.

Pasquotti’s cannon throw-ins from Cavalry’s right side are matched up with Julian Buscher or Jose Escalante’s precise deliveries from frees and corners from either flank.

In the box, Cavalry players look to split and attack various zones, nominally represented as: one – near post; two – inside near post; three – inside back post, and four – outside back post. The team regularly switches up their runs and number of players in the box to block off markers and free up their preferred target man in a designated zone.

In turn, Cavalry love a near post flick to change position of the ball and attack the finish at back post. Nothing revolutionary here, aside from the team’s superb sense of timing and composure to finish.

Check out the video clips below as Cavalry worked a series of near and far post flicks to reposition the ball and score against Pacific earlier this season. Note Nik Ledgerwood’s presence to win second balls and brief flash of how Cavalry set up their set-piece shape in the final clip.

But, outside the box, Cavalry form a perimeter of “bullet” players that will attack balls that drop into four central areas at the edge of the box. The “server” player usually joins this group, creating a set of two to four players that seek to essentially lock the ball inside the perimeter. The perimeter can expand or contract depending on where the ball settles and to facilitate quick ball movement to find a free player to re-serve the ball in.

Finally, the perimeter is supported by two defenders that are left high up the pitch, both to defend the opponent’s striker and re-serve any balls that escape the perimeter.

See the video below where Cavalry manage five different attempts on the same set-piece before closing down the clearance against Forge, followed by a third phase goal from Dom Malonga that was incorrectly ruled offside.

In fact, the true genius in Cavalry’s dead ball machine is that they’ve basically turned set-pieces into another opportunity to vigorously repress the ball – a defensive principle that is at the very core of their identity – by predicting where the ball will drop, winning it, and quickly shooting or patiently moving it to a position where high-quality service can again take place. If the effort is cleared once again, well, it’s rinse and repeat.

A good example is Cavalry’s infamous 8-nil win over Valour, when they mixed up their set-piece techniques and it ultimately paid off with five goals from set-piece situations. Check out a few variations below, capped off by Buscher’s second phase goal after generating a central overload on Valour’s centre-backs with Dominick Zator and Jordan Brown.