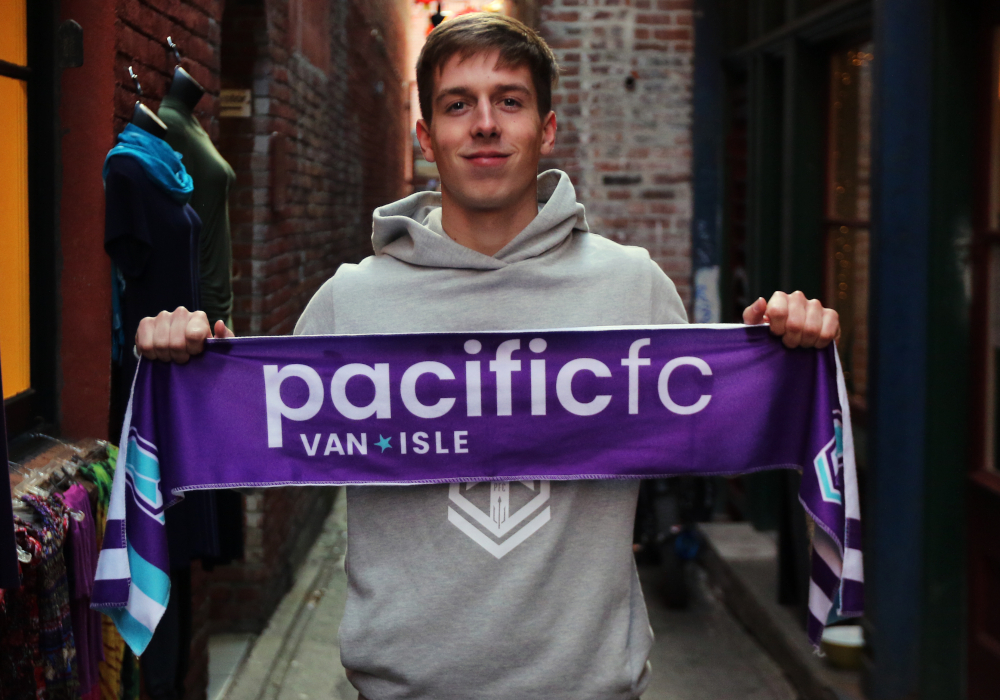 A career in soccer is defined by only a few major, life-changing decisions.

Do you stay at home or transfer abroad? Stick with a club and fight for your chance or take a leap of faith and hope for better elsewhere? Survive the pressures of lofty expectations or prove yourself in the trust of another?

For Noah Verhoeven, the first major decision in his professional club career came in the form of a choice: stick with the Vancouver Whitecaps, where he had last been loaned to Fresno FC, or step out and make a name for himself in a new club, Pacific FC.

It wasn’t a straightforward choice for the 19-year-old, who grew up in New Westminster in Mainland Vancouver, and played for Surrey United before swapping to the Whitecaps’ Residency and Academy during his early teenage years.

“The CPL is just a great opportunity for young players to come in and get playing time, and really make a big mark on a club,” Verhoeven told CanPL.ca. “Pacific FC is a club I knew trusted me right away. They expressed their interest very early and that was huge for me. I was very happy when they reached out to me. It’s a growing league, and this is the first year, so it’s a great opportunity for a guy like me to come in, make my mark on the game, and be successful.

“They all expressed their interest and they were happy to have me. They were very persuasive in trying to get me to sign. They said I was a guy they really wanted to look into and sign and have as a part of their club. They felt like I fit the club well and had all the characteristics to be a great player. I was very happy that they identified me as one of the guys they wanted so it was an easy decision to make when the time came.”

ALL IN THE FAMILY

Verhoeven comes from a soccer-loving family. His grandfather, father and most of the family his age play the sport, and Noah himself supports Bayern Munich and Chelsea, and particularly emphasized his regard for Blues attacker Eden Hazard, his favourite player.

He describes himself as an unselfish attacking midfielder, a playmaker who “likes to get other people on the ball and involved” in a match. He points to his distribution and chance-creation as key attributes to his game, and added he’s “not afraid to have a shot at goal” when he can, either.

Those are the qualities he explained Michael Silberbauer asked him to focus on at Pacific FC, where he hopes to earn everything he is afforded through consistent, commendable play.

“One of the parts of the CPL that was very appealing to me and probably to all the young players that are coming into the league is the opportunity to come into a new place and assert yourself and get playing time and earn things,” Verhoeven explained.

“Young players, they just want the opportunity to earn something at a club, and the CPL’s great for that – they’re giving us opportunities to come in and earn a spot and earn playing time and show the country that, you know, young guys can do it.”

Those opportunities – and the capitalizing of them – are necessary to trigger the next big decision in one’s career.

Born to an American mother and father, Verhoeven also faced another choice early in his career: whether to represent the U.S. or Canada, the country he was born and raised in, having grown up in New Westminster.

He earned a nod at the U.S. Under-18 national team ranks, which he graciously accepted. But for Verhoeven, the opportunity to represent Canada came as a higher priority, and he captained Canada’s Under-20 team in the 2018 CONCACAF U-20 Championship.

Now, he’s got his eye on another international milestone.

“The next big tournament is the 2020 Olympics so I’m looking to be a part of that with Canada,” Verhoeven said. “It would be a dream come true. I’m working hard to be in the best position so that when the time comes, I’m one of the guys being called up to the team, and hopefully one of the first choices. All I can do right now is work hard.”

And, while on the topic of footballing fantasies, Verhoeven also played along when faced with the prospect of taking on his former Whitecaps in the 2019 Canadian Championship.

For now, Verhoeven will focus on making the most of a major career change.

But when a new door opens, so too do further opportunities come knocking.