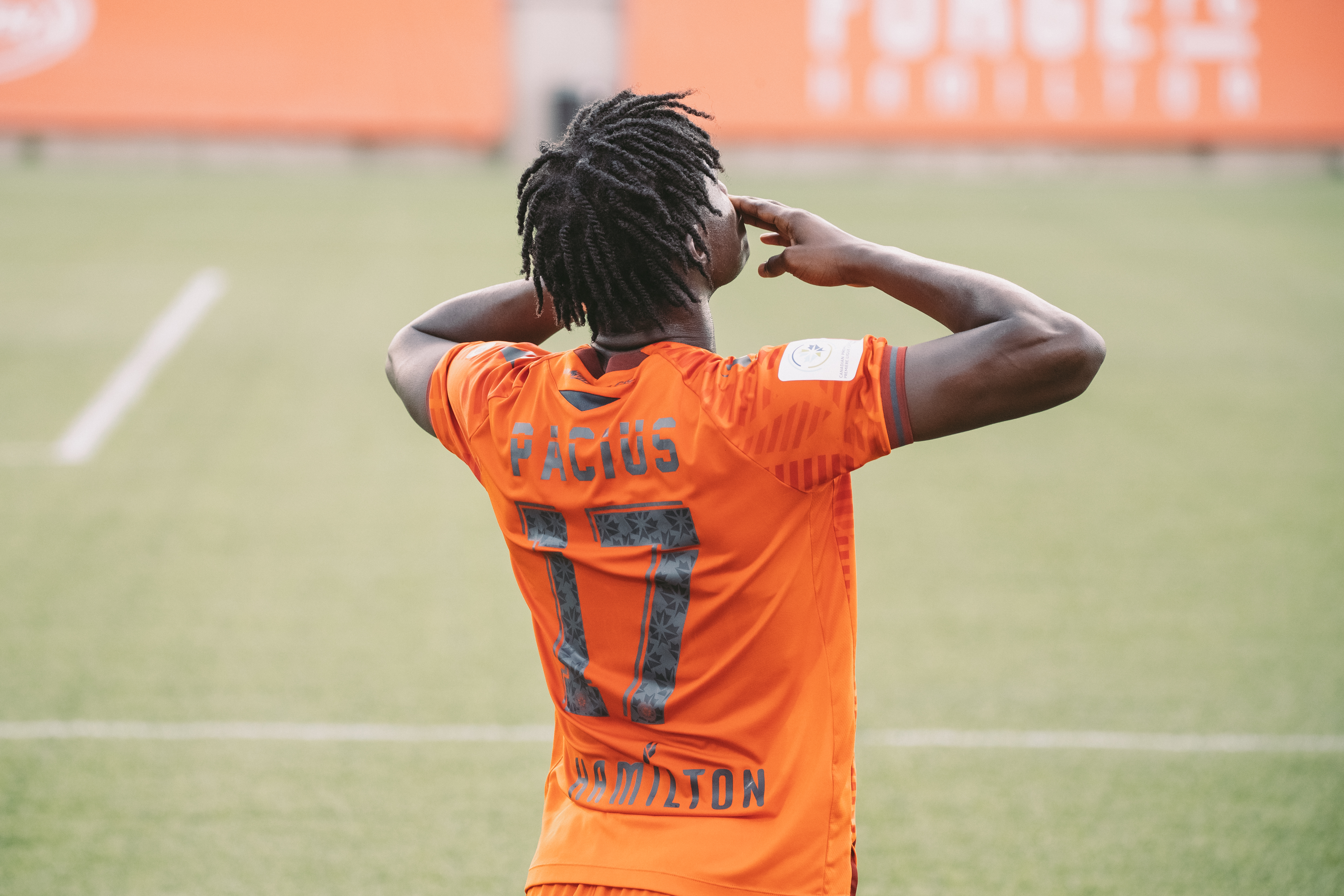 The race couldn’t possibly be closer. On the back of their fourth consecutive victory, and goal difference, Forge FC climbed to the top of the CPL table on Wednesday night. While they are the league’s first team to reach nine victories, they are tied on points with Atlético Ottawa and Pacific FC. Cavalry, who dropped to fourth after a 2-1 loss to Forge, sit only a point behind on 28.

That four-game stretch has also closed the gap in another race, as with six goals during that run Woobens Pacius now has nine on the season — just two behind Pacific FC’s Alejandro Diaz for the league’s Golden Boot lead.

Pacius scored again Wednesday night in that 2-1 win over Cavalry, tying a club record with four straight matches with a goal, and he has developed into one of the league’s most lethal attackers. At just 21 years of age, Pacius has shown significant growth this year, making him the next must-watch young Canadian in the CPL.

Forge FC coach Bobby Smyrniotis was recently asked by the media, after Pacius had scored a hat-trick against FC Edmonton, what the young striker does so well when he gets scoring chances.

“You guys are going to laugh, but he scores,” he said.

Smyrniotis would elaborate: “I think I’ve said this before about players, but there are certain players that have a touch and ability around and inside the box and I think that is his biggest attribute. He knows how to find the goal, he knows how to do it in a quick strike.”

Pacius has not only been finding the goal recently, but doing so in style, including this goal of the month — and potentially the season — candidate against Valour on July 23.

“I think I was a little bit surprised like everyone in the stadium,” Pacius told CanPL.ca about the goal. “Sometimes you just see the ball and you go with instinct, and I think on this goal I just shoot.”

That instinct has been serving him well of late. But while it results in split-second finishes and decisions, it is the culmination of hours of work on the training pitch and has been honed over the course of this year.

“It is something that we work on a lot in training,” said Pacius. “Especially with Bobby, in the box. As he said multiple times, he knows that I am a good player in the box and in training we work on my position in the box, where I can score most of my goals, and I think you can see it in the games. Most of the time I am in the right spot at the right moment and I can just finish.”

Below is an example of the kind of goal Pacius has more typically scored this season. Against Halifax, he first holds up the ball very well and then plays it out wide to Marcus Caldeira. He then follows up the play, and when Kieran Baskett spills Caldeira’s attempt, he is in the perfect position to finish it off.

The numbers suggest that this is paying off, and Pacius’ goalscoring form has been far from just luck. He is second in the league behind only Diaz with 8.77 expected goals and has had 11 big chances this season.

But these metrics didn’t always translate into goals, as to start the year Pacius had a bit of a difficult stretch where he was still getting into good positions, but couldn’t finish his chances. That all changed when he scored in added time of a Canadian Championship preliminary round match against PLSQ side Mont-Royal Outremont back on May 11.

“When you miss multiple chances it is difficult,” said Pacius. “It is difficult in the head especially. But I feel like as soon as you score one goal, everything goes away. You get back your confidence and I think that’s what happened, I got my confidence back and I feel like I am not scared when I am in front of the goal. I keep my composure, and I can put the ball in the goal.”

Here is a clear example of how that shift in confidence and composure has manifested in his play. Below are a pair of chances in which Pacius is played through down the right flank.

The first came in the club’s second match of the season against Cavalry. All alone, Pacius hits the ball low directly at Julian Roloff in the Cavalry net. A few months later, and Pacius has an even more difficult chance from a similar position against Edmonton. After beating his man, Pacius switches to his left foot to open up more of the goal and then smashes it into the back of net.

This is another aspect of Pacius’ game that makes him so dangerous: he is incredibly two-footed. The 21-year-old has scored three times with his “weaker” left foot this season, and six times with his right. His confidence with both feet not only allows Pacius to open up more of the net for himself but also quickly and decisively get shots off from both sides.

“It is important, especially for a striker to be able to score with any part of your body,” said Pacius. “If it is a right foot, left foot, header, with the chest, you just have to be able to score. It is not something that I was born with, of course like people said I might be good at scoring goals but it is about working. We train every day, especially for a striker, finishing, right foot, left foot, same for headers.”

Being able to get shots off in different ways is critical because, well, shots are critical to scoring. Statistically, the best strikers in the world not only finish their chances but also shoot more frequently than their peers. Pacius currently sits second in the league in shots on target, again only behind Diaz.

“To score we have to shoot, if we don’t shoot we aren’t going to score,” said Pacius. “So I think if I can take the most shots possible eventually I will be able to score at least one goal so it is important for someone, especially like me a striker to shoot and find a way to score goals.”

Another way Pacius has demonstrated his composure this season is from the penalty spot. On a Forge team with plenty of experienced spot-kick takers he has stepped up twice and scored on both occasions. He also did so against Toronto FC in the 2020 Canadian Championship final penalty shootout.

For Pacius, reaching the top has also meant learning from those who are already there. He counts Luis Suarez and Robert Lewandowski as the two players he watches the most, and who he tries to model his game after.

“These are the players that I watch the most, especially Suarez when he was at Barcelona,” said Pacius. “For me, he was the best striker at the time. His movement, his finishing, same for Lewandowski. He always finds a way to score some goals a little bit by being at the right spot at the right moment. And able to finish right foot, left foot, header.”

Following their footsteps then, it is no surprise that Pacius’ goal for the rest of the season is to score more of them.

“Stay focused, I think it is going pretty well right now. I can’t stop, I just have to keep going to be able to help my team. Because as a striker I feel like the way that you can help your team is scoring goals.”

All clips courtesy of OneSoccer