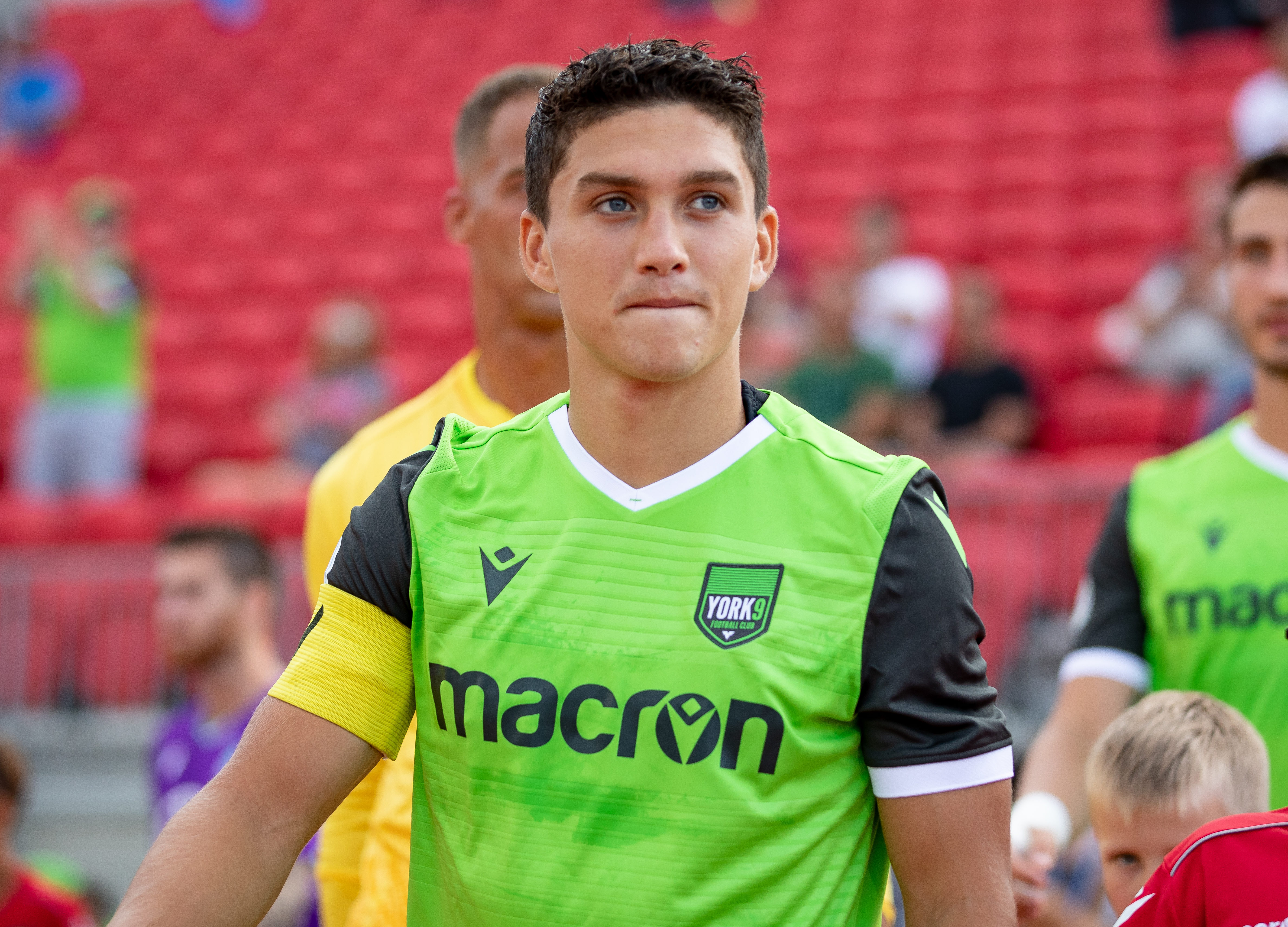 YORK REGION – In a year of many milestone moments, and statistical accomplishments, York9 FC captain Manny Aparicio might be carving his name into the Canadian Premier League’s history books in an … unconventional way.

For, having scored a beauty of a rocket during a 2-1 win over Pacific FC on Wednesday evening, Aparicio celebrated by ripping off his shirt, which promptly drew a yellow card from referee Filip Dujic’s pocket. As it stands, it’s Aparicio’s fifth yellow card booking of the 2019 CPL season – sixth, if you include one in Canadian Championship play – more than any other player in the league (thus far).

So, then – is Aparicio going for the very first disciplinary leaderboard crown?

“It’s not something that I’m looking forward to!” Aparicio told reporters after the match, when asked about the prospect of finishing atop the season’s yellow card tally. “Hopefully I don’t end the season with the most yellow cards. I do like to get stuck in, and for me to get a yellow for taking my shirt off, it’s never the best thing. But, you live and learn. It’s probably the best goal I’ve ever scored, and my family was in the stands, so it happened in the heat of the moment.”

Oh, those pesky yellow cards – his head coach Jimmy Brennan has also earned a fair few. You won’t hear him complaining about the booking post-goal, though with a coach’s hat now firmly upon his head, Brennan also urged a touch of caution.

“Listen, if I scored a cracker like that, I’d be celebrating like that, too,” Brennan said with a laugh, looking to Aparicio on his left. “It’s hard. Sometimes that emotion gets the better of you. The boys are celebrating and you take your shirt off. We know the rules. It’s a yellow card. Manny knows better, and after, I looked at him and he kinda went, yeah, my fault.

“You gotta be careful. I understand, though. I’ve been a player. I get it. You score a goal and you take your shirt off,” Brennan added, turning to Aparicio again and offering “I’m trying to stick up for you!” before concluding: “I don’t mind if it’s a good tackle or a foul and you get your booking, but this one’s silly and we know it.”

While Aparicio leads the way in this less-than-favourable category, rest assured – the York9 captain remains a leader of equal measure when he assumes the responsibilities of his armband, commending his teammates for earning a third consecutive result, and a second straight win in league play.

With upcoming tilts against Cavalry FC and the Montreal Impact, the next few days could very well define this new, in-form Y9.

“We’re finally starting to click … and we are on a high right now,” Aparicio offered. “We’re winning games and pulling results through. It’s going to be a test of how professional we are and how much we can fight, because we’re playing every three days. It’ll show how strong our squad is, how much depth we have, and who’s willing to step up and deliver for us?