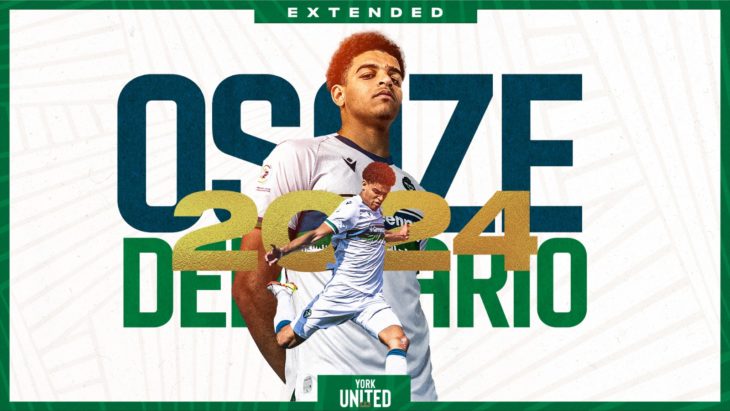 York United FC announced Wednesday that Osaze De Rosario has signed a two-year contract extension and will remain at The Nine Stripes through 2024.

The 21-year-old enjoyed a superb debut campaign and found the net 12 times in the Canadian Premier League: a club record. He was tantalizingly close to finishing the campaign as Golden Boot winner too, but fell one goal short of Pacific FC’s Alejandro Diaz.

In all competitions, he scored 13 goals in 30 appearances, notched four assists and accumulated over 2,300 minutes of action.

His performances throughout 2022 ensured he was one of three nominees for the CPL’s Best Canadian Under-21 Player award.

De Rosario arrived at the club in unusual circumstances, having started the year with Ukrainian top-tier side Rukh Lviv. However, the outbreak of war meant a return to Toronto and he began training with York. With minimal roster space available, the striker worked tirelessly and his contributions during pre-season impressed Head Coach Martin Nash. A contract was offered soon after.

“Osaze is another CPL success story,” says Angus McNab, York United FC’s CEO/President and GM. “It’s astonishing to think he started the year playing in Ukraine and then things changed so quickly for him. I’m delighted he took an opportunity that came his way in such unique circumstances. We’re all thrilled he’s back with the club and believe he can really push on, go one better and win the Golden Boot next season. Osaze has developed and matured a lot as a player in the nine months he’s been with us and I’m excited to see what’s next for him.”