Born in Scotland, Fleming moved to Edmonton at the age of three and has been a part of the soccer community since the day he began playing for the KC Trojans. Fleming took up coaching after graduating from the University of Alberta at the age of 21 and has gone on to have a tremendous career.

Now Fleming is getting the chance to fulfill one of his lifelong goals.

“It’s a dream come true to coach professionally in my hometown and I’m really looking forward to it,” says Fleming. “I never imagined this would happen when I started coaching. I have been so blessed to have so many great people around me who gave me opportunities and this is another one of those.”

“I really have to thank my family because they’ve made so many sacrifices along the way. It really makes this moment more special for me. I wouldn’t be able to achieve this without them.”

“Also, I want to thank Tom and Dave Fath, who continue to support professional soccer in this city. What they’ve done for the community over the years is tremendous. They’re great ambassadors for our city.”

Fleming’s journey with FC Edmonton began in September of 2017 when he joined the Academy as the Under-16 Head Coach. His role with the Academy continues to evolve, as he takes over as Technical Director of the program. In addition, Fleming will also be the Head Coach of FC Edmonton’s Under-21 Reserve team.

“I loved it,” says Fleming, regarding his first year with the Academy. “I saw the growth from September all the way through March and, as a coach, that’s a great reward.”

His goal for the program is simple – to continue developing players who go on to play for the first team.

“That’s what the purpose of the Academy is,” adds Fleming. “We want to give these kids every opportunity to develop into the best players they can be.” 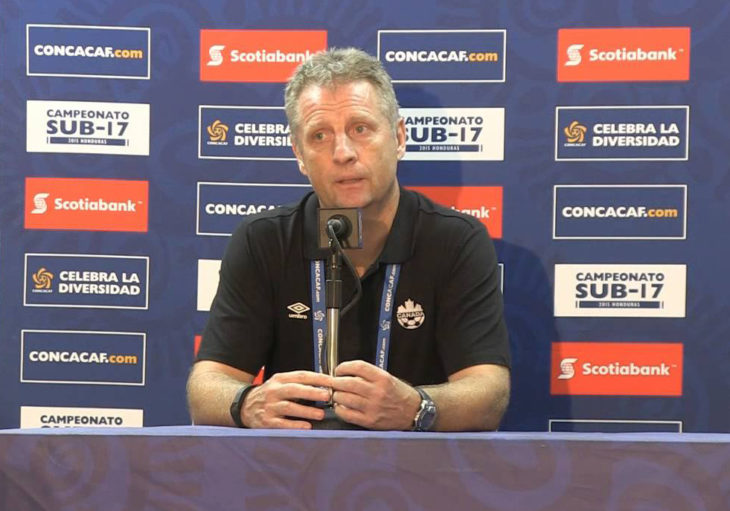 When it comes to identifying and nurturing young talent, there aren’t many coaches in our country as qualified as Fleming. He spent 14 years with Canada Soccer, including as Head Coach of the Under-17 program for eight years. Under the guidance of Fleming, Canada qualified for two straight FIFA U-17 World Cups after a 20-year absence.

“It was a tremendous experience,” recalls Fleming. “To see all the different environments from our country to other countries, it really humbles you. You learn a lot when you see how other teams train.”

“When you talk to other coaches about their developmental systems and infrastructures, it made me realize how important it is to have something like the CPL for our country.”

Fleming and Paulus have known each other for approximately 15 years. The pair worked together at the Prairies National Training Centre, which is where the top players from the region trained at the time. They both share a passion for youth player development and have similar ideas when it comes to the game.

“We always kept in touch over the years,” says Fleming. “He helped me with a couple of projects with the national program, and he gave me the chance to join the Academy. We have the same philosophy when it comes to developing kids and how we want to play football.”

“We are very open with each other and that’s really important. I will continue to support him in every way I can so he can be successful.”

FC Edmonton is a proud member of the Canadian Premier League. Become a member today! Your $50 deposit ensures your spot in line for season tickets, and grants you access to member-exclusive events and information! Join today – https://login.canpl.ca/fcedmonton