HFX Wanderers FC announced Friday the club has signed a pair of players drafted in the 2018 CPL-U SPORTS Draft, bringing on Peter Schaale and Andre Bona to Stephen Hart’s roster.

Drafted fifth and 10th overall respectively, the two have been fighting for spots on the squad throughout the club’s preseason training camp since being drafted in November.

Hart said the pair have brought fantastic commitment and attitude to camp and deserve their chance with the team.

“They have proved themselves and I’m happy to have them both. They’ve been fantastic on and off the field,” Hart said. “Their approach has shown their passion and they want to be a part of the Wanderers.”

Bona, who holds a master’s degree in environmental science from University Du Quebec a Montreal, said he was not expecting to be drafted at all.

“It’s exciting, a great opportunity for me and I’m pushing myself to do a great season at a new level in a professional league,” Bona said.

The 29-year-old prefers to play at right full-back but he can also operate in the centre of defence and is noted for his pace up and down the wing.

“Saying he’s extremely quick is an understatement,” Hart said, with a laugh, referring to Bona’s days as a sprinter.

During his time as a track athlete, Bona once clocked a brisk 10.86 seconds for 100 metres.

A natural centre-back, Peter Schaale can also play full-back, but the Cape Breton Capers star is expected to slot into the middle of the backline.

“It’s exciting, taking a step to the pro level and I’m looking forward to proving myself,” Schaale said.

The 22-year-old mentioned the early part of training camp had been a step up in quality from U SPORTS, but affirmed he has managed to acclimatize to the level.

“I came in with the attitude I had to fight for my spot. I was determined. I knew I had a chance and I had to take it,” Schaale said. 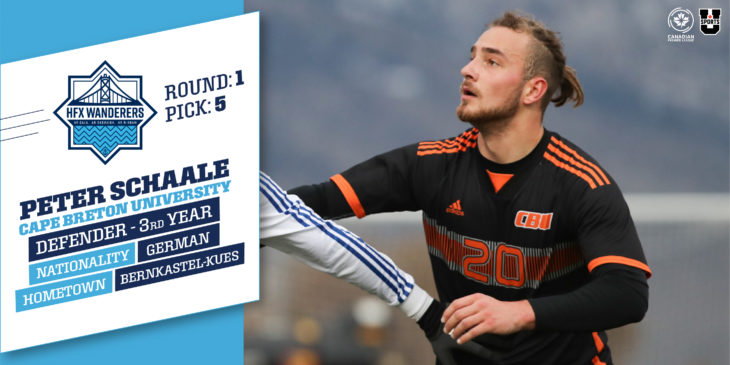 In addition to being strong in the air. Hart has a lot of time for Schaale’s all-round game as a defender.

“Peter reads the game well, he is an excellent passer of the ball, both long and short. He is still learning but is a solid defender,” Hart said.

Adding Bona and Schaale to the roster means the Wanderers have now signed all three of their CPL-U SPORTS Draft picks, with goalkeeper Christian Oxner already on the roster.