Canada manager John Herdman has turned to plenty of familiar faces as his side prepares to travel to St. Kitts and Nevis for the third of four CONCACAF Nations League Qualifying matches, with Alphonso Davies, Jonathan David, Ballou Tabla and the rest of the team’s young contingent returning to test themselves once again in this important away match (Nov. 18, 7:00 p.m. ET/10:00 p.m. PT, live on concacafgo.com).

Veteran Atiba Hutchinson remains in the squad, joined by a returning goalkeeper Milan Borjan, who most recently kept Liverpool to a clean sheet in a triumphant 2-0 win in this UEFA Champions League group stage tilt.

Canada currently sits third out of 34 teams as the team looks to secure an automatic berth in the upcoming 2019 CONCACAF Gold Cup.

“We are really looking forward to this challenge as St. Kitts and Nevis have performed well in Concacaf Nations League thus far,” Herdman said ahead of the tilt. “Given our history in this venue, we know it is a tough place to get a result, but we are clear on our approach and the players will be ready.”

Following the match at Warner Park Football Field, the Canadian men’s national team is set to wrap up this qualifying round with a home fixture against French Guiana on March 26, 2019. 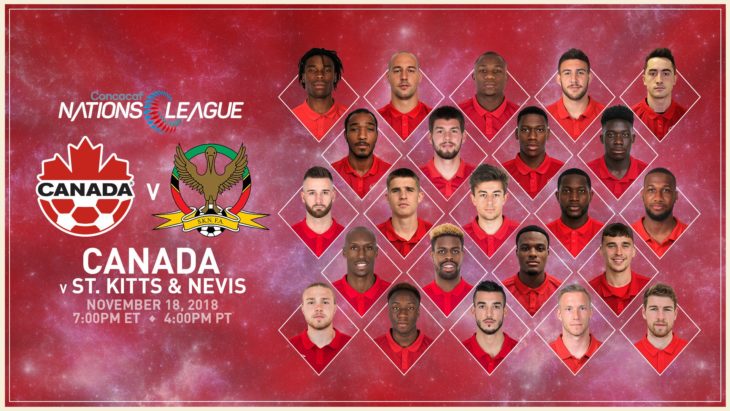