Soccer fans are able to relive the historic kickoff of the 2019 Canadian Premier League season via the release of a brand new “Forever First” video.

“Forever First: Inaugural Match” was posted on the CPL’s YouTube and IGTV channels on Monday for all Canadian soccer fans to watch and enjoy.

If you weren’t among the announced crowd of 17, 611 fans at Tim Hortons Field on April 27, 2019 in Steeltown, you have a chance to relive the game and watch the 905 Derby rivals play to an entertaining and historic 1-1 draw that put the CPL on the sporting map in Canada.

There were many firsts in this match, with York9 FC’s Ryan Telfer scoring just three minutes into the game to notch the first goal in Canadian Premier League history.

Forge outshot York9 FC 7-3 in the first 45 minutes with only one of those attempts on target.

In the second half, it was more of the same for Forge, with three straight chances for the home side capped off by an excellent strike from Tristan Borges in the 49th minute, which hit the crossbar.

In the 60th minute, after a pretty tic-tac-toe passing play involving Kadell Thomas, Emery Welshman and Borges, York9 FC goalkeeper Nathan Ingham made the stop of the match to keep his team up by one.

Manny Aparicio also earned the first yellow card in CPL history for a tackle on Borges.

Forge FC kept driving towards the net in creating nearly double the chances York9 had, but the Nine Stripes ‘keeper had Bobby Smyrnitois and his squad searching for answers. That was until the 77th minute.

Thomas, who subbed on for Chris Nanco, was a force for Forge FC in the second half and it showed after he ripped one home to equalize.

In lieu of late drama, Aparicio doubled down on his history-making performance with a second yellow, becoming the first player ejected with a red card.

Watch “Forever First: Inaugural Match” by subscribing to the CPL’s YouTube and IGTV channels, or click on the video player at the top of this page. 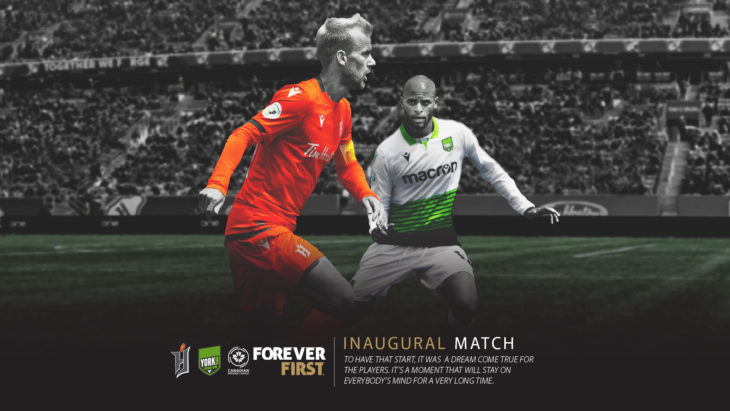