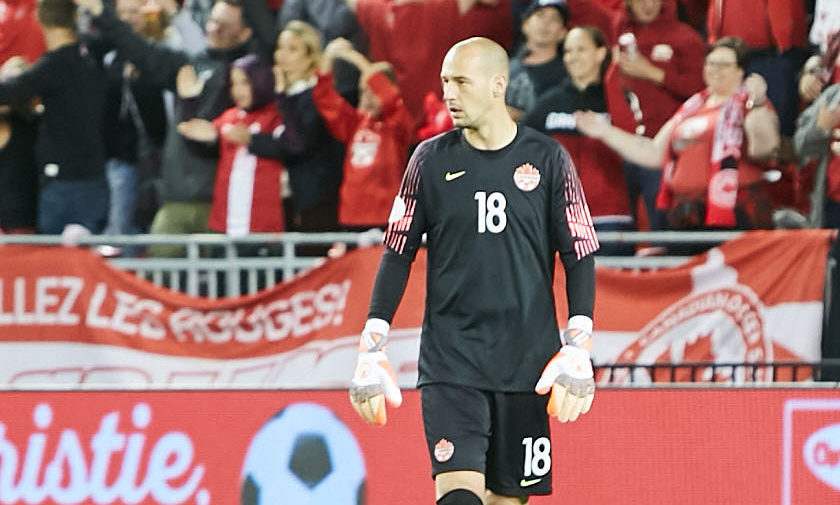 Milan Borjan suits up for Canada. (Photo: Canada Soccer).
‘We’ve got a voice’: How a moment of leadership helped compose Canada to win
2019-10-15
by
Armen Bedakian, Supervising Editor
CanMNT News

TORONTO – There was a moment, late in Canada’s 2-0 win over the United States on Tuesday, when Milan Borjan needed to step up in a big way.

But, unlike the many heroic saves and blocks the 31-year-old goalkeeper has made throughout his career for club and country, this simple act wasn’t born of a shot on goal, testing his physical and mental resolve. Instead, it was a moment of leadership, where a wise word or two – even if they’re riddled in expletives – can be the difference between a hot-headed mistake and a calm, cool finish.

Canada, inexplicably up 1-0 to their regional rivals with less than 10 minutes remaining in this crucial Concacaf Nations League A match, was starting to get caught up in the emotion of the moment.

Could you blame them? It had been 34 years since Canada has defeated the U.S. – hell, their last goal against this team came in 2007. So, when Richie Laryea was cleaned out by a Josh Sargent slide tackle, all of that emotion – that passion, that hunger, that desire, coupled with a healthy dose of anxiety, nerves, and some war-cry anger – nearly came to a head.

A fuming Laryea made his way over to Sargent. Borjan grabbed him and pulled him away. With his hands around Laryea’s head in a tight embrace, Borjan attempted to calm his young teammate down.

“I told him not to yell, not to fight, because we don’t need a yellow card,” Borjan recalled, when asked by CanPL.ca about this particular exchange during the post-match conference.

“We’re winning the game, and he needs to stay in this game, and not be worrying about what their players are trying to do to us to get a yellow card or a red card.”

His first attempt didn’t work, as Laryea beelined back to the subsequent fracas right afterward, prompting Borjan to once again grab hold of his younger compatriot for another lambasting.

“I told him (to calm down) the first time … and the second time, well, the second time I had to swear at him a little bit to have him understand what I’m trying to say,” Borjan added, with a laugh. “He listened after, and everything was good.”

“Obviously, I was on a high from the game, playing really well, and it was just really intense. So, I was a little bit too emotional at that time, and he helped me calm down,” Laryea recalled, when asked the same question by CanPL.ca. “It was good for the group that he did that. It calmed down everyone else as well.”

In this moment of history – yes, Canada would go on to win 2-0, recording the biggest win in sentimental significance and likely in 2022 World Cup qualifying hopes in the John Herdman era – it may be a little odd to focus specifically on what was otherwise a forgettable exchange.

Except, in that moment, the new Canada was born.

You could look at Herdman’s tactics to explain why Canada even had that lead in the first place. To that end, Herdman got those tactics – a box midfield, two strikers up top, overwhelm with a high press, multiple bodies swarming on each U.S. possession – bang on correct. Borjan had no problem pointing to his head coach and crediting him for bringing “the spirit, the belief, and the energy” to this new-look Canada.

But, looking at the tactics alone would be doing a great disservice to the true secret weapon in Canada’s historic win.

This team, on this day at BMO Field, kept cool heads all the way to the final whistle, a cooler head than we’ve ever seen before.

“It’s hard, it’s really hard, those last 20 minutes when you’re winning 1-0,” Borjan explained. “But, when the guys listen to their leaders in the team, it keeps us all on the same task; to win the game, and keep things calm. Richie was listening; the first time, he was maybe a little bit too hot, but the second time, he came down and things went good from there.”

So, to the spoils then for the victors. What says the head coach of this composed new Canada?

“We’ve been working for a period of time on just making sure that we’re all clear on what we do when we turn up and put that red shirt on,” Herdman said, a twinkle in his eye. “This guy (Milan) is a leader, and we’ve got a voice now. We speak from the heart. They’ve experienced a lot. I’m not naive enough to think it’s going to be my ideas and my passion; it’s just trying to draw all their passion from what’s in there. They’ve been hurting for a long time, and they’ve wanted a night like this for a long time as well.

“It’s only one step. It’s only one little drop in the ocean of what I’m hoping for this team. There’s more to come.”