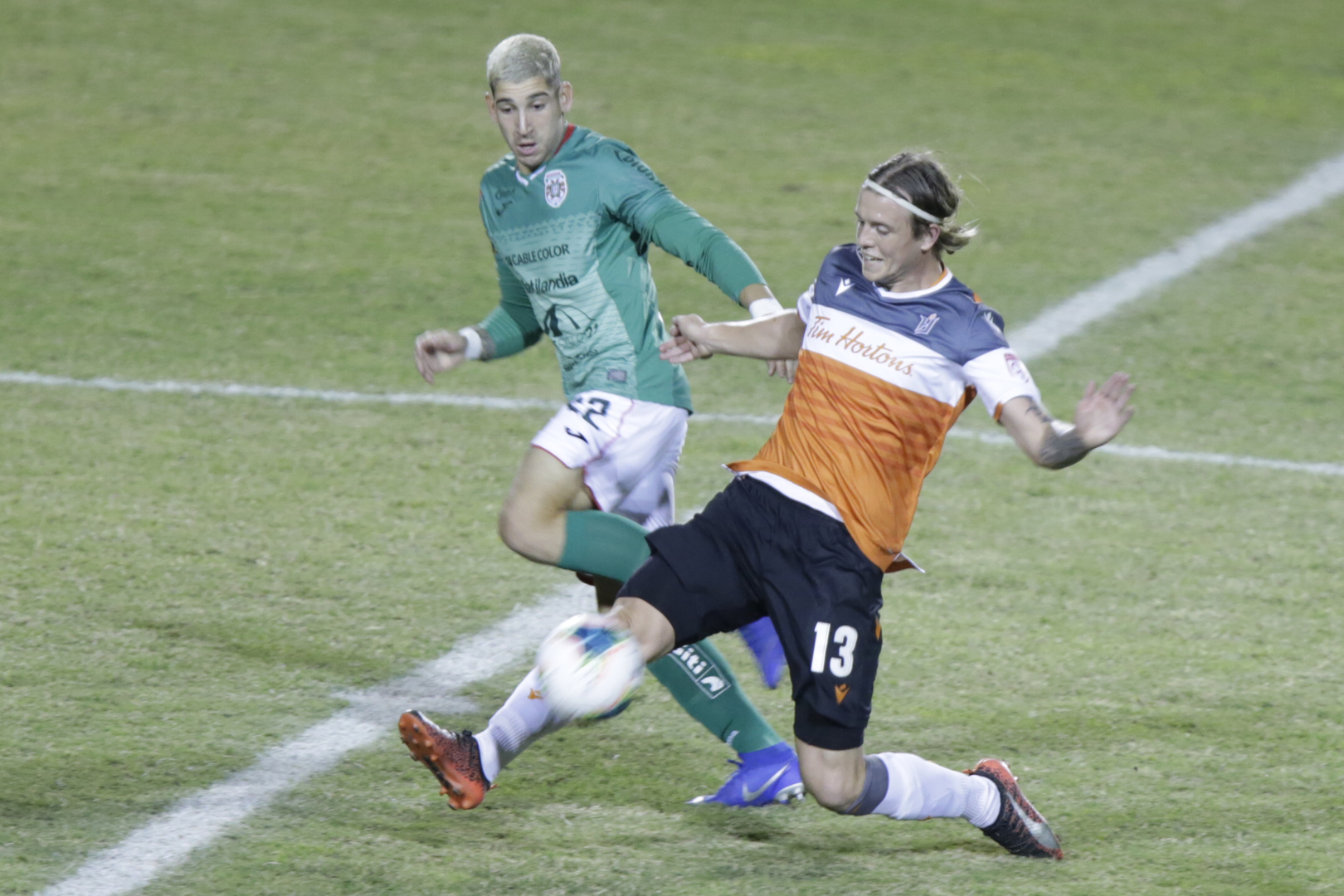 Forge FC's Alexander Achinioti-Jonsson battles for the ball with a CD Marathón player. (Photo courtesy of Concacaf)
Forge taking lessons from painful Concacaf loss: ‘We will come back and have success’
2020-12-09
by
Charlie O’Connor-Clarke, Digital Content Editor (@charliejclarke)
News

The press conference after Forge FC’s 1-0 defeat to Club Deportivo Marathón in Tuesday night’s Concacaf Champions League play-in was one of the strangest the club has seen.

Not just because assistant coach Peter Reynders handled the media duties after Bobby Smyrniotis’ red card late in the game, either. No, it was the feeling of disappointment that’s been so alien to Forge in the past two years; after such a hard-fought Concacaf League campaign, they found themselves at the end of it. No two ways about it; the loss hurts.

Sifting through his emotions not 10 minutes after the final whistle in the Honduran capital of Tegucigalpa, Reynders wasn’t sure where exactly it went wrong for his side on a night where the goal seemed to elude them.

“I think everybody knows how difficult it is to win here, we had a game plan, they did it perfect,” Reynders offered. “We played a very good game, had our chances, but sometimes other things happen.

“It was a difference between physical and more technical, that’s how I see it. I think we played a very good game, a high-intensity game with a lot of duels, but I think we had our chances. Unfortunately (there was) one moment that we were maybe a little bit less focused, but that was it. Is that experience? I don’t know.”

Really, Marathón’s goal from a second-phase set-piece was the only time Forge’s defence really buckled, and even that was forgivable; goalkeeper Triston Henry made a good reaction save on the initial header, and the next shot just managed to find space between the defenders standing on the goal-line.

Statistically, the scales tip in Forge’s favour for the game. They had a slight majority in possession, and they missed just 21 of their 246 attempted passes — an astonishingly good team-wide accuracy of 91 per cent. They took seven shots, four of which were on target. Were it not for a cruel bounce off the crossbar, Mo Babouli would’ve had an equalizer early in the second half.

That’s not quite the whole story, though; Marathón played a ruthlessly physical game, at the same time luring their opponents into reckless fouls and off-ball extracurriculars. Seven yellow cards were handed out across the two teams, and Forge captain Kyle Bekker was sent off just five minutes before his coach for a studs-up tackle. Ultimately, an intensely emotional game got the better of Forge as frustration — at the opposition, at the referee, and at themselves — mounted.

The Concacaf League is a competition that Forge will be returning to in 2021 as the defending Canadian Premier League champions. So, Reynders suggests that it’s important they learn a lesson from their experiences on Tuesday and last week against Arcahaie FC.

“We have to deal with the way of playing in this area of the world,” Reynders said. “We will take it with us. I think again today we had our chances; we had our chances last week, now again, against a tough team, a physical team. That’s a thing we have to improve and deal with, and we will. And we will come back and have success, that’s for sure.”

There will be plenty of time now to analyze and dissect; surely, Forge will return to continental play with a vengeance, having now become so enamoured with the possibilities it offers. Right now, though, you can’t blame them for feeling a sting.