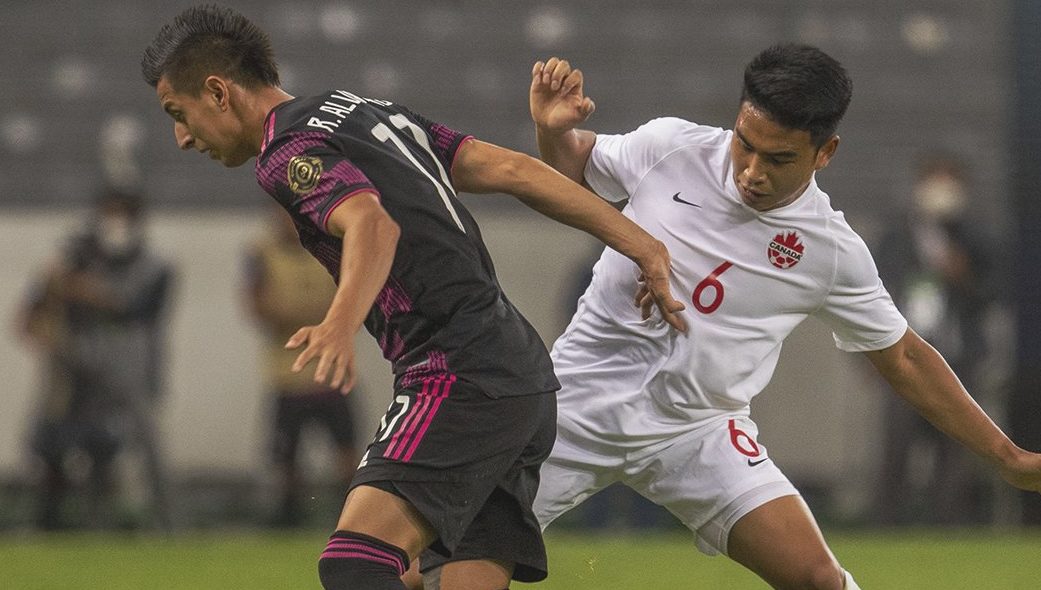 Canada stumbled at the final hurdle.

Mauro Biello’s under-23 side bowed out of the Concacaf Olympic Qualifying tournament on Sunday with a 2-0 loss to Mexico who, with the win, qualified for the Tokyo Olympics.

Canada entered halftime in a stalemate after keeping the heavily-favoured Mexicans to a handful of chances. But the breakthrough came in the 57th minute when Uriel Antuna capitalized on a misplay from Canadian goalkeeper James Panetmis and his backline.

A second goal came a few minutes later when a perfectly-placed free-kick was bundled into the Canadian net.

Mexico will be joined by Honduras in Tokyo as Concacaf representatives after the Central American side stunned the United States 2-1 in the other semifinal.

Taking the captain’s armband in Derek Cornelius’ absence, Pantemis’ personal performance hinged on the result. Through the first half, the CF Montreal ‘keeper was Canada’s shining light. But by the second half, and a misplayed ball that led to Antuna’s opening goal, he was scapegoated. Still, six saves and some defensive heroics should be applauded despite his distribution issues.

Despite lining up as a right fullback, “ZBG” was one of Canada’s attacking bright spots again, bombing behind the Mexico midfield into space and causing issues. Defensively, the CF Montreal defender was tireless in his fourth straight start of the tournament. Taken off after 65 minutes as Canada chased a goal.

Montgomery, who came out injured in Canada’s first tournament match against El Salvador, returned from his break and looked solid considering the pressure Mexico was putting on him. The fumble off Montgomery’s chest led to Mexico’s second goal but that was hardly his fault.

A lovely last-ditch diving tackle in the first five minutes gave Norman Jr. a shot in the arm – and just the start he needed. The Cavalry FC defender thrived in the pressure. Fortunate not to concede a penalty in the first half, or get sent off in the second half.

Godinho earned his fourth start in a new role, slotting as a left centre-back in a back three and he looked quite good.

The CF Montreal defender looked in his element as Canada’s left fullback. Didn’t manage to do much going forward but was busy handling Antuna and Sebastian Cordova – two Mexico senior team starters. Frustrations with the former led to a yellow card after 70-odd minutes.

About as good of a game you can have against the Mexican giants as a defensive midfielder. Made all 17 passes he attempted and broke down more than his fair share of attacks.

Canada’s unsung midfield hero pressed well in midfield, creating a couple of broken plays that sparked counters. All you can expect from the Vancouver Whitecaps midfielder: pure industry in light of creative activity of…

Lucas Dias earned his much-anticipated start as Canada’s main attacking focal point and key hold-up player. Playing on the left, the 18-year-old combined well with teammates and used some defence-defying footwork to maintain possession in the attacking third.

A couple spirited first-half runs and ensuing shots from Buchanan gave Canadian supporters something to hope for going forward but, like most things for the side, it just didn’t happen in the second 45 minutes.

Canada’s lone striker was, believe it or not, isolated in Canada’s 5-4-1 formation. Brym failed to make much happen, save for a couple nice dribbles and hold-up plays. Subbed out after 60 minutes.

Deserved to see the field earlier than 60 minutes but looked lively.

Offered some directness and pace up the left side in an effective cameo. Played Bair in on one of Canada’s best attacking moves of the final 30-odd minutes.

Added with a half-hour in chase of a goal, Daniels operated well in the extra space given from Mexico but failed to create.

Making his Canadian youth national program debut, the York United fullback was impressive and even got forward to create a chance in an eight-minute appearance.

An ineffective stint for the Vancouver Whitecaps winger, who saw the field for less than ten minutes.