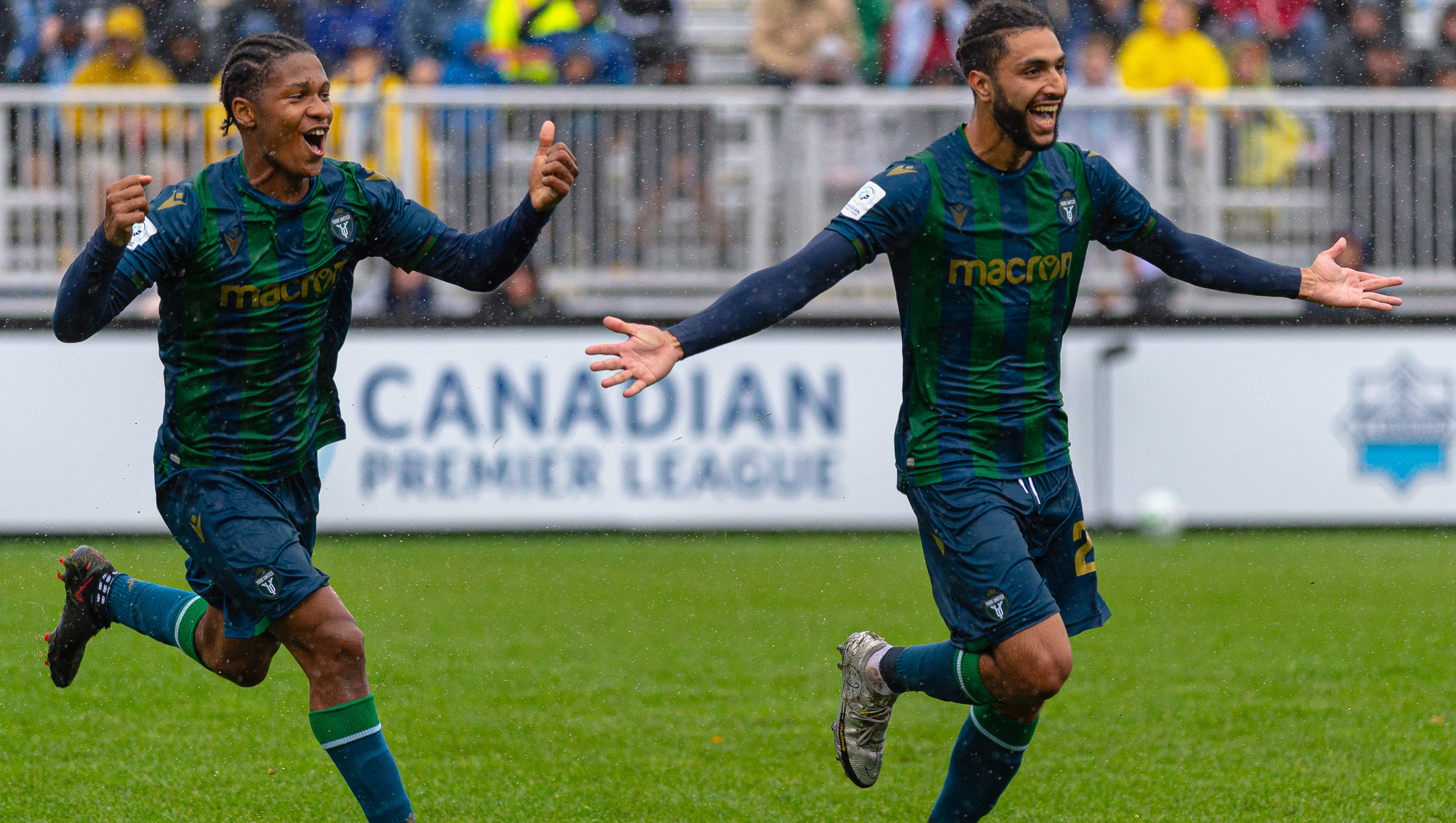 Wait, we only have one minute?

York United and HFX Wanderers split soiled spoils on an unhinged Labour Day afternoon at Wanderers Grounds. After 80 minutes, the Nine Stripes looked destined for a victory on goals from Diyaeddine Abzi and Julian Ulbricht. But back-to-back penalties – in the span of two minutes – on contact from Jordan Wilson to Stefan Karajovanovic evened the match. Alvaro Rivero’s goal of the season-contending long-range effort was quickly matched by the Wanderers in a wet and wild slapdash conclusion to the match in Halifax.

‘Most insane bit of football of my life’

Did we just witness the most entertaining CanPL match in the League’s history? From Alvaro Rivero’s halfway goal to back-to-back, mirror-image penalties involving Jordan Wilson and Stefan Karajovanovic, the last part of CanPL’s lone Labour Day match were nothing short of a whirlwind. “Those last 10 minutes were probably the most insane bit of football I’ve played in my life,” Halifax defender Peter Schaale suggested after the match.

When asked, Halifax coach Stephen Hart suggested the Wanderers’ inaugural home game against Forge should be held in higher esteem because, well: “We won that day – that’s the difference.”

Behind the furious four-goal final 10 minutes was a York United side on a two-goal lead controlling their destiny. Coach Jimmy Brennan has recently critiqued his team’s ability to close matches out – considering they’d given up goals in the final 15 minutes in each of the last four matches.

Monday was… Something different, to say the least. When Wilson conceded back-to-back penalties, though Brennan noted the second call was not as straightforward, it saw those issues rear their head again.

“This is what we talked about, what we worked on this week,” Brennan said, referring to the fury of play that led to Halifax’s final equalizer. “Corner against us, header is flicked on – I don’t think Osvaldo [Ramirez] is meant to send that for a free header.

“We’re just looking to see a game out and all of a sudden you’ve conceded a penalty about 40 seconds after conceding another… It’s just not good enough.”

Monday’s tilt was as wet as it was wild. Soggy conditions in Halifax worsened after about 25 minutes when the skies opened, leading to an uber slow natural grass pitch and several dead zones, especially on the nearest touchline to the team benches and broadcast cameras.

These waterlogged conditions, which appeared to have aided Christian Oxner’s gaff on the opening goal, ended up with the Wanderers paddling upstream while down 2-0.

The subtle adjustment made by coach Stephen Hart was long balls over the top – something York exploited earlier in the match – and avoiding soaked left-hand side. Those changes eventually got the ball to Karajovanovic on those aforementioned penalty calls.

“There were two phases of play really: one where the ground was perfect for playing and one where it was not,” Hart said, referring to the second half where his team chased a result and the weather. “We made some changes and started moving the ball better but the pitch became difficult to play on so we decided to play a little more direct.

“We made some subtle changes… We tried to push the wide players high up the pitch. Because the ball stopped rolling on the left, we flipped the ball to Karajovanovic and he was very direct with his running and, ultimately, got us two penalties.”

The attacking midfielder’s back-to-back assists set up solid goalscoring opportunities for teammates Abzi and Ulbricht – two of a series of impressive passing sequences. His passing play was made more impressive considering the temperamental pitch.

HFX Wanderers will go back out on the road this weekend as they’re set to visit Atlético Ottawa on Saturday (1:30pm ET/2:30pm AT). York will also head back to Ontario for a match on Saturday, paying a visit to their 905 Derby rivals Forge FC (4:00pm ET) in the ComeOn! Match of the Week. Watch all matches live on OneSoccer.