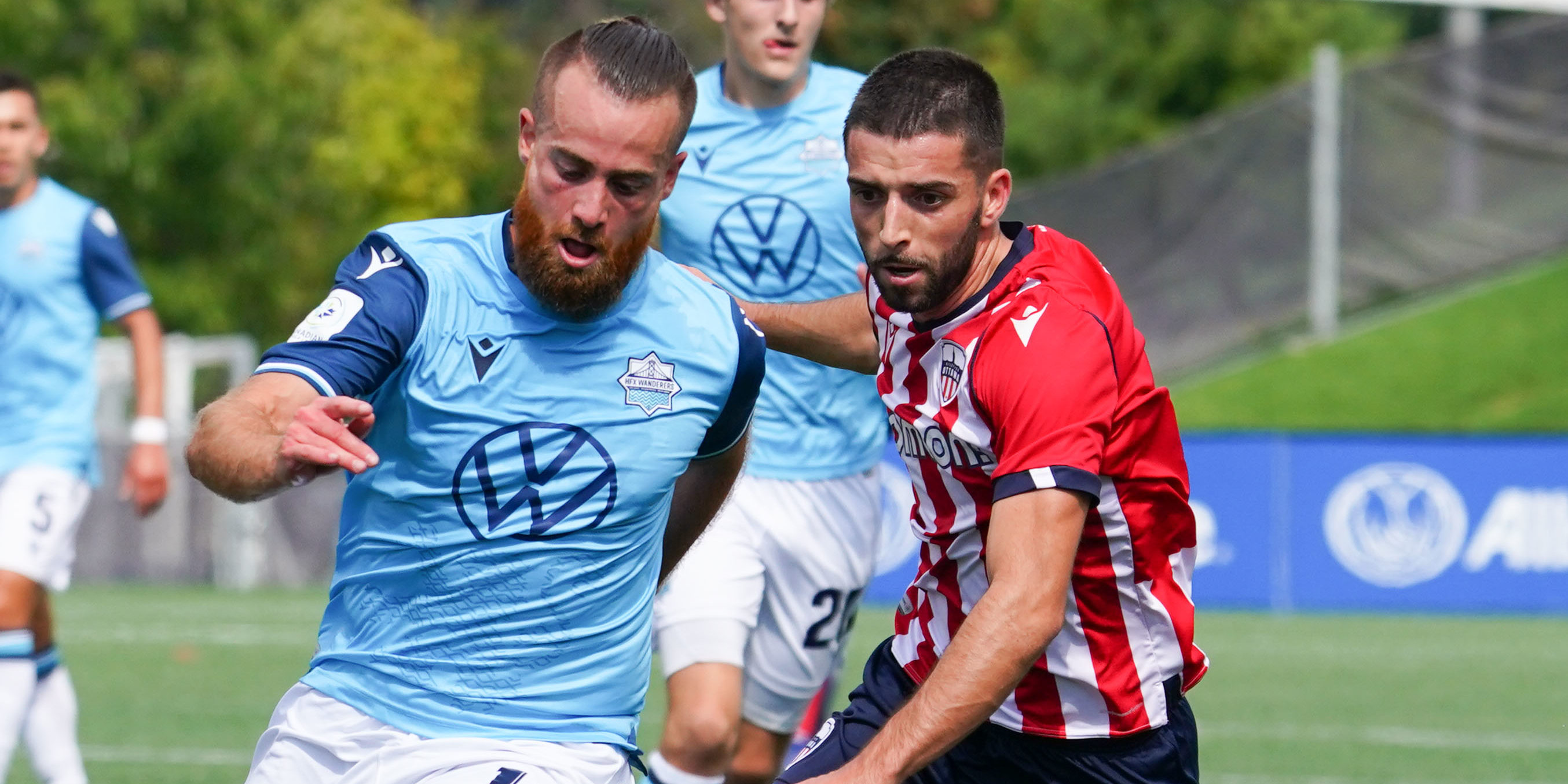 HFX Wanderers took all three points from TD Place on Saturday, as Joao Morelli’s last-gasp strike secured victory for the visitors over Atlético Ottawa. Although the home side had far more possession and outshot their opponent 12-10, Ottawa only managed to find the net once (thanks to some good work by Malcolm Shaw), which drew them level after Morelli’s opening goal from a penalty kick. Just as it looked like the contest would end in a draw, though, the Wanderers found yet another late goal to snag the win.

Stephen Hart said on Friday that, after seeing Atlético Ottawa three times already this season, he knew he might need to switch things up and try to show them something different in this fourth meeting.

He did exactly that with his starting 11 on Saturday, as he assigned golden boot leader Joao Morelli to play as an attacking midfielder just behind Cory Bent as a lone striker. Though he scored the goal from the penalty spot, Morelli’s role was very much to be the creative force trying to set up his teammates, rather than looking to get on the end of those chances himself. Since coming to the CPL, Morelli has had a few chances to play in that number 10 spot — which he has explained is his natural position — and it’s always been fascinating when he has had those opportunities.

Morelli made three key passes and four crosses, with a team-high 25 passes made in the attacking half. As the trailing runner on several counter-attacking opportunities, Morelli was also a goal threat — he was constantly able to find open space at the top of the box for cutback passes, with the Ottawa defenders typically drawn to Bent or another forward closer to the six-yard box. That’s how the Wanderers scored their late goal; Sam Salter drove at the end line and found a late-arriving Morelli at the top of the box for a good strike.

Morelli himself explained postmatch that he’s embracing his role as a versatile player who slots into multiple positions: “We were changing all the time, moving to two tens, and then just me; it’s a little bit too deep for me sometimes, but coach likes me to get the ball and try to create. I like playing as a striker too where I can get the ball closer to the box, but 10 is my natural position and I’m always trying to get into the box as much as I can.”

With 11 goals now on the season, Morelli is building a solid lead in the golden boot race — and he’s definitely making a strong Player of the Year case.

With 64% possession and 296 passes in the first half, Atlético Ottawa certainly did look like protagonists in the opening stages, despite allowing the first goal. They had a couple good opportunities to score where the finishing was a little lacking, but they surely would’ve hoped to produce more than three shots (one on target) from all that time on the ball.

After scoring, the Wanderers did spend a lot of time in the first half sitting back and inviting possession, remaining well-organized in their defensive shape. So, Ottawa struggled to really break them down, perhaps not moving quickly enough to pull them out of position.

At halftime, Mista made a clever substitution, bringing Viti Martinez on in place of Tevin Shaw. The Spaniard, with better passing range and creativity than his fellow midfielder, offered a new threat from the middle for Ottawa, and he made an instant impact with his long-distance assist to Malcolm Shaw.

“We tried to play more forward, because Tevin is more defensive than Viti,” Mista explained in his postgame press conference. “Really we drove the game, and we continued to create chances to score, but unfortunately we didn’t… They have maybe the last two chances, they score one, and it’s the reason Morelli is one of the best players in the league because they had two chances and he scored two goals, and we weren’t ready to score today.”

Martinez still operated in a double-pivot with Ben McKendry, as Shaw had, but he got forward a little more and looked to play direct balls up to the strikers. As a result, Ottawa could get up into the attacking third more quickly and cause more problems.

Ottawa has always been a team that moves the ball well, as their opponents consistently point out in interviews, but that final ball seems to be the missing link.

How many times have we seen this same story? Atlético Ottawa start a match well, looking strong in possession and creating some good chances, only to concede an unfortunate goal and fall behind.

Ottawa outplayed HFX for long stretches of both halves, but they were behind from the 17th minute thanks to a reckless challenge that gave up another penalty kick. It was the ninth time they’d conceded from the spot in the 2021 CPL season, as discipline in the box continues to be a concern for Mista’s side.

Then, with so much possession and a vast slate of scoring opportunities (they finished with 12 shots), they were unable to score more than once — the goal was an excellent one, but even that didn’t come from the methodical possession they’d sought to build with throughout the game. It’s tough to criticize them much for a performance like that; it’s easy to make a case that they were the better team, and certainly deserved at least a point if not all three. Still, for some reason or another, the ball is not going in the net for them — on Saturday, it was partly down to some excellent desperation defending by the Wanderers, who made a handful of goal-line clearances.

The Ottawa gaffer was, understandably, exasperated postmatch, after a game that feels all too familiar for this team.

“The problem is we repeat the same history, like the other games,” Mista said. “Again, we created a lot of chances to score, and I don’t know why but we can’t — the other team is shooting, plus the penalty, maybe two times or three times, and you lose the game. We don’t know if we can do anything else more to win the game. We created, we had possession, we recovered the ball very soon, but the problem is the luck is not with us and I don’t know.”

When you score a late winner like that, you’re almost guaranteed to wear this crown, but Morelli’s performance in the centre of the attack was tremendous all afternoon. With three key passes and three shots of his own, Morelli was the driving force for the Wanderers’ attack in a game where they did a lot of defending.

Up next for Ottawa is an intraprovincial road trip to take on York United this Tuesday night (7 pm ET). The Wanderers, meanwhile, get the week off while they, too, prepare for an away game at York next Saturday (2 pm ET). Watch all matches live on OneSoccer.