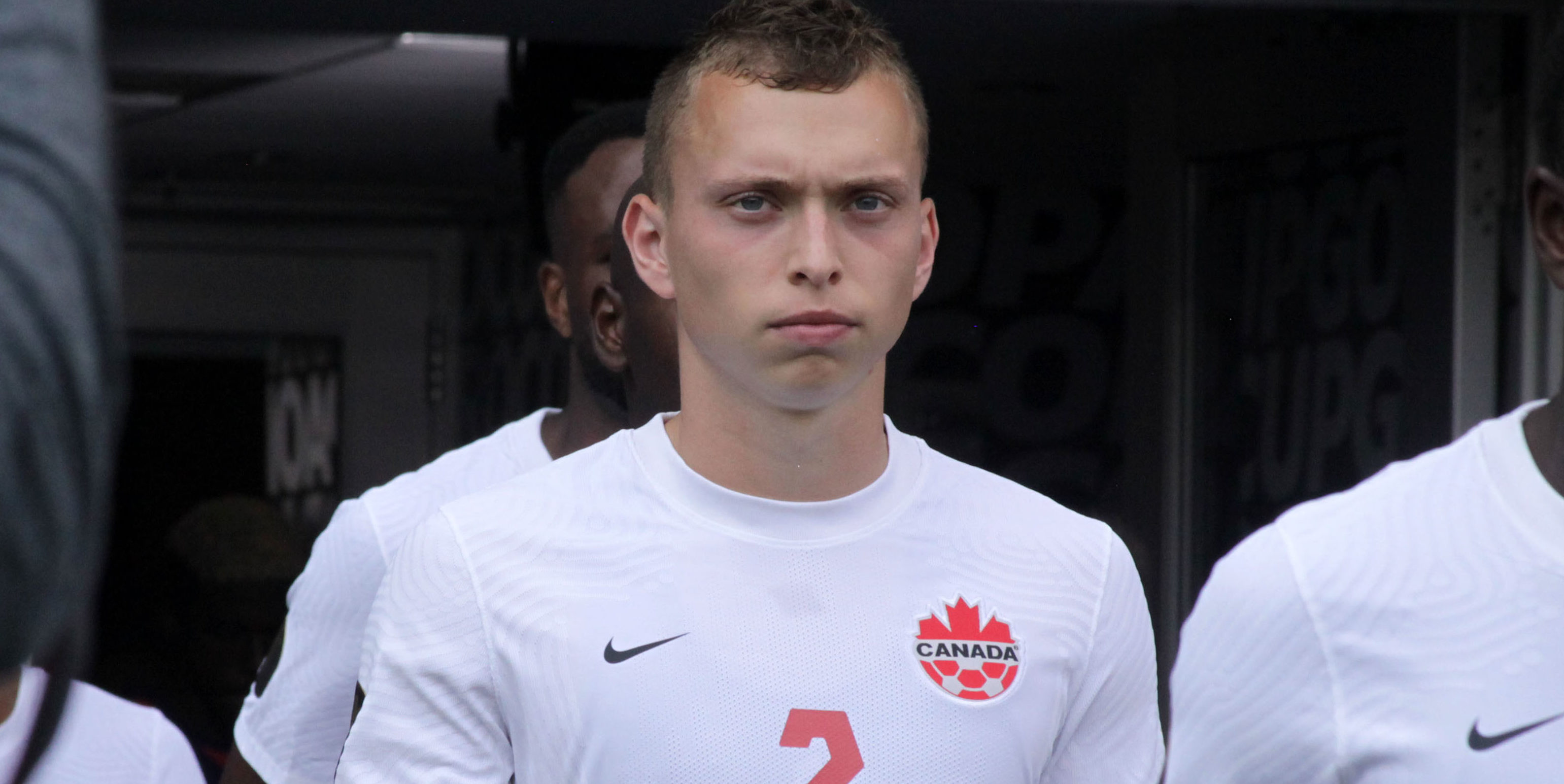 Alistair Johnston for Canada at the 2021 Concacaf Gold Cup. (Canada Soccer)
CanMNT’s Alistair Johnston on Beyond the Pitch: ‘We can make World Cup dream into a reality’
2021-08-31
by
Charlie O’Connor-Clarke, Digital Content Editor (@charliejclarke)
CanMNT News

Before doing it for the Canadian national team, did Alistair Johnston know how to play as a centre-back in a back three? Perhaps not exactly, but he was certainly brave (and talented) enough to give it a shot.

That’s just one of many topics on which the Nashville SC star spoke candidly this week in an extended interview with CanPL.ca’s Kristian Jack as part of this week’s special Beyond the Pitch series, which will profile some of the incredible characters that make up this Canada team before they embark on their journey in the ‘Octagon’ — the final stage of FIFA World Cup qualifying for Concacaf — this Thursday against Honduras.

Johnston recalled a phone call with Canada coach John Herdman in early 2021, in which the boss wondered aloud whether he might have the skillset to fill a particular role for the senior national team.

“I’ll still never forget, John Herdman called me and we were going into one of the World Cup qualifying camps. He went, ‘Hey, have you ever played centre-back in a back three?'” Johnston recounted. “I definitely never have, but how do I word this where he doesn’t go, ‘Oh boy, this is not the guy for us.’ But also I don’t want to lie, so I was like, ‘You know, it’s something we’ve tested before,’ I was kind of giving it large a little bit with that, kind of trying to lead him on to think that it was something I could do, because it was something I was excited about.”

RELATED READING: Richie Laryea on Beyond The Pitch: ‘I should sit down and reflect to see how far I’ve come’ || Beyond the Pitch: CanMNT & Toronto FC fullback Richie Laryea

Having seen fellow national team member Kamal Miller succeeding that year in MLS with CF Montreal, Johnston felt the two of them had similar skillsets and would work well together in those roles. Thankfully, Herdman agreed, telling Johnston that he wanted to experiment with his best position — whether it’s overlapping with wingback Richie Laryea, or tucking back inside — and Johnston showed a keen enough eye for tactics to make it work; he likened his new role with the national team to that of César Azpilicueta of Chelsea, which Herdman apparently agreed with completely.

In just two years, Johnston has risen through the ranks tremendously, going from Vaughan Azzurri of League1 Ontario (for whom he played in the 2019 Canadian Championship) to a regular starting role with an MLS team — as well as his country.

Johnston has such a knack for spotting details in football that he’ll surely make a great coach one day (although preferably not for a while…). The 22-year-old harkened back to his earliest days watching the sport with his siblings; though his parents wouldn’t permit them to watch television during the week, they were able to negotiate being allowed to watch as many soccer games as possible.

“Ever since I was a kid, everyone would go out or have sleepovers, and I was like, ‘I don’t want to sleep over, I want to wake up and watch Man United play at 7 am on Saturday morning,'” Johnston said.

“That was just something we enjoyed, I love just to watch the game as a fan, but also just to dissect teams and see what other teams are doing, and that’s kind of always been something that’s just been part of my DNA.”

Johnston, truly, is a student of the game; he went on to explain just how fascinated he is with watching players and clubs around the world and learning from those at the highest levels of football. Perhaps, as a result, it is definitely not lost on the 22-year-old that this World Cup qualifying campaign offers a chance for him and his Canada teammates to get to the absolute greatest stage in the sport.

“There’s no reason why 2022 should be out of our grasp,” he said. “If we take care of business and play the way we can, with all the confidence in this group, you know we can make this dream into a reality.”

He added: “All the momentum that this game has had in this country over the past couple of years — you just look at what the Canadian women’s national team is doing, winning a gold medal, it’s unbelievable what they’ve done. It inspired a nation, it inspired our group too. It’s pretty special that they’ve done it, and we look at it and it’s like, okay, they’re doing that so we’ve got to go and do something too. We’ve got to step up our level. So what would be better than qualifying for 2022? I can’t think of anything bigger, better.”

Johnston is part of the youth movement within this national team — although he’s a little older than Alphonso Davies or Jonathan David — and that generation of players is a large part of the reason this side has such real aspirations of qualifying. However, he pointed out that part of their motivation stems from the veterans in this group — Milan Borjan, Atiba Hutchinson, even Jonathan Osorio, and Sam Piette — who have been around the program a long time.

“We have such a good group of leaders that have been through tough times,” he explained. “When you look at that group, some of those older guys that have been around; guys were around for when they lost to Honduras, guys have seen that stuff and struggled with Gold Cups, and really struggling in World Cup qualifying, and then to have new, young generation coming through that’s extremely talented, but that older group also seems like wow, what they can bring to this group as well is unbelievable…

“All these guys that have been over there, have done so much for this program and given so much, haven’t been able to reap the rewards, so us young guys go, we could do this for ourselves, but we could also help these guys who have been absolutely grinding for the past decade or so in this program to really achieve the goals that we’ve set out from day one.”

Those goals — qualifying for Qatar 2022 chief among them — have not yet been achieved, but it certainly appears this Canada group, Johnston included, has the confidence and the talent to get there.

To watch the full Beyond the Pitch interview with Alistair Johnston, click here. Canada begin their World Cup Qualifying campaign this Thursday, September 2 with an 8 pm ET kickoff at BMO Field against Honduras. Tickets are available here, and the match can be watched live on OneSoccer from 7:30 pm ET.