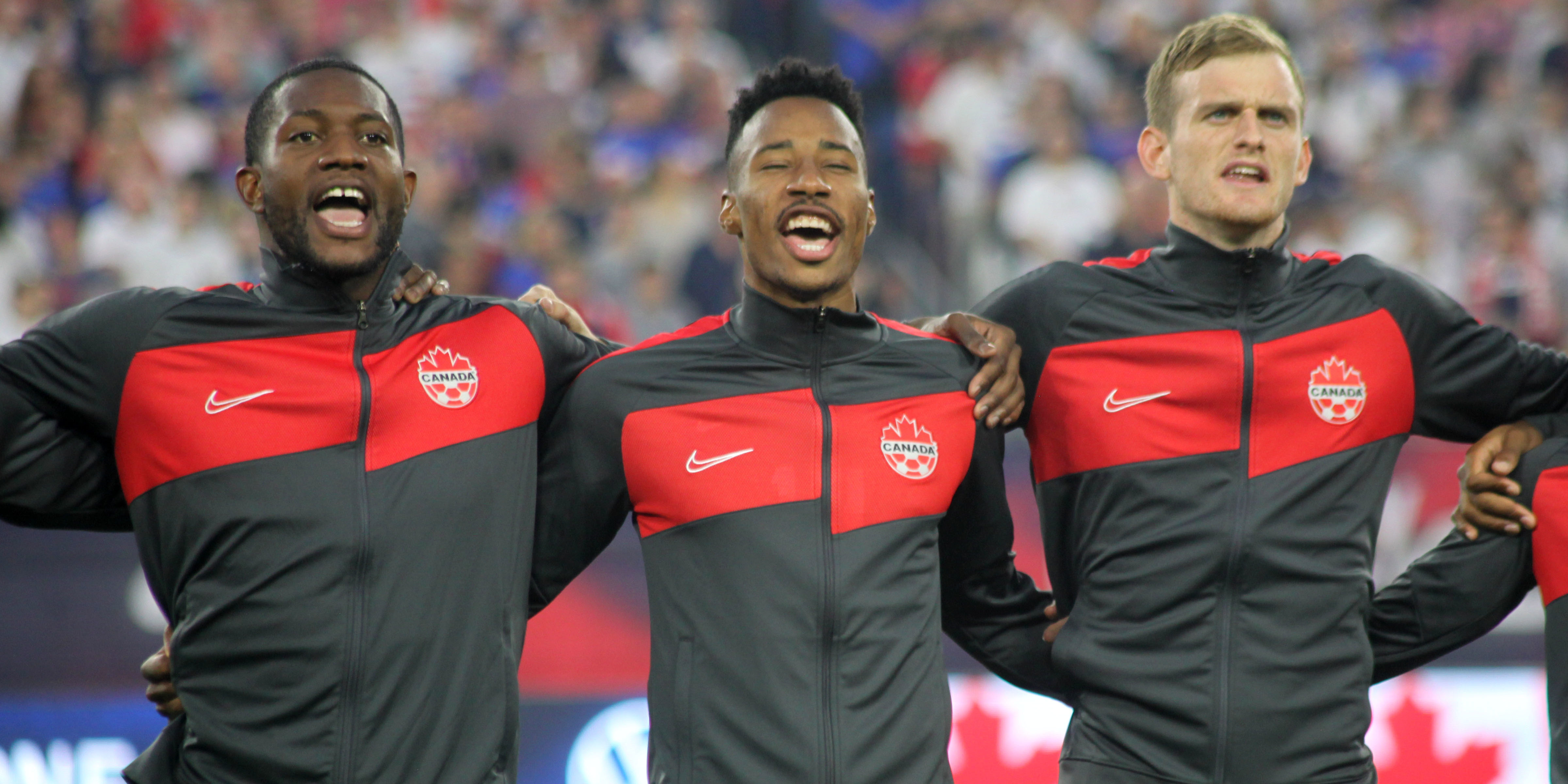 Doneil Henry, Mark-Anthony Kaye and Scott Kennedy sing the Canadian national anthem before kickoff vs. the United States. (Canada Soccer)
CanMNT’s Mark-Anthony Kaye on Beyond the Pitch: ‘We know we need to qualify’ for 2022 World Cup
2021-09-08
by
Benedict Rhodes, CanPL.ca Contributor (@BTFR17)
News

Colorado Rapids and Canadian men’s national team midfielder Mark-Anthony Kaye was the latest player to join CanPL.ca’s Kristian Jack on Beyond the Pitch, ahead of a big World Cup Qualifying match against El Salvador on Wednesday night.

Kaye talks about his recent move from LAFC to the Rapids, the expectation that Canada has that it will qualify for Qatar 2022, his passion when representing his country, and much more.

One of the leaders on and off the pitch for the national team, Kaye has been vocal in the past about Canada’s chances of qualifying for the 2022 World Cup in Qatar. As Canada has progressed through the World Cup Qualifying stages, the belief that they can qualify for arguably the biggest tournament in sports has now become an expectation.

“We know that we need to qualify,” Kaye said. “After the Mexico game (at the Gold Cup) I told John (Herdman) right on the field ‘we’re going to qualify for this World Cup’. We one hundred percent believe it, and it will be a massive failure and disappointment if we don’t. We know for sure that we’re going to qualify, and it’s just game by game we’ve got to take, but it’s exciting to have that self-belief within the group.”

Kaye added that the expectations and belief on Canada has been instilled by everybody around the squad — from the players to the coaching staff.

“I think it comes from everyone,” Kaye started. “Obviously you have to give John credit, for being the top leader, and the one that kind of set the pace for it, but I think everyone has bought in. After the last three years, where we’re competing with the top teams in Concacaf, and giving them a run for their money — and we have this Gold Cup where we feel terrible about not getting to the final — it’s a different feeling than years before.

“We knew we should’ve won this Gold Cup, it wasn’t ‘we did well, we got out of our group’. We were mad that we didn’t get to the final, and show everyone that we can win.”

Those are lofty goals and expectations, but it has been clear throughout the latest series of Beyond the Pitch episodes that the entire program has bought into the idea that Canada are very much one of the big fish now in CONCACAF. Previous Beyond the Pitch episodes this week — which include topics like this — include Canada stars Richie Laryea, Alistair Johnston, Jonathan Osorio, Samuel Piette, Kamal Miller, and Maxime Crepeau.

Kaye, who also mentioned the recent success of the men’s and women’s national team, and how Canada “needs to be a powerhouse” in the sport, spoke about how much it means for him and his teammates every time they line up and sing O Canada before a match.

“It’s a special moment,” Kaye said. “We have always tried to figure out ways to put ourselves out there, and that shows how united we are. I think sometimes it’s forced, but when it comes from the players, it’s so genuine and authentic that it becomes so real and people see that people see that connection between the guys.

“In Haiti, I was like ‘let’s give them a sense of fear, we’re not scared of you guys’. We came all the way here, the pitch is terrible, it’s hot, all the excuses you can make up, but I’m like ‘let’s sing our national anthem with so much pride’,” he added, saying that the passion would put off their opponents. “Kudos to the Italian national team, they do it all the time, and I felt like ‘why can’t we do that?’, we’re so proud of our country, we should be able to show that every time we have a national anthem.

“Now that’s the standard, and it’s amazing, you see it every time the national anthem is being played, everyone is blaring it at the top of their lungs, and it’s a good feeling, it gets you riled up and ready to go,” Kaye added with a smile.

Throughout the episode of Beyond the Pitch, it’s clear that Kaye has a good support system around him, but when asked about what it would mean to make it to the World Cup, one person in particular came to mind.

“It would meant the world, right away I think about my mom,” Kaye said. “After everything she’s given me, to give her the opportunity to go to a World Cup and watch her son, and the country that gave us so much, it would make my life. That’s what I’m striving for.

“All my teammates, who have their own dreams, and family members who are looking up to them… It’s bigger than us, it’s not just for me. I say my mom first, but then it goes to all the kids who are trying to play this game, and really have some role models to look up to.”

To watch the full Beyond the Pitch interview with Mark-Anthony Kaye, click here. Canada will close their opening window to the final round of World Cup Qualifying this Wednesday, September 8 at BMO Field against El Salvador. The match can be watched live on OneSoccer and Sportsnet from 7:30 pm ET.