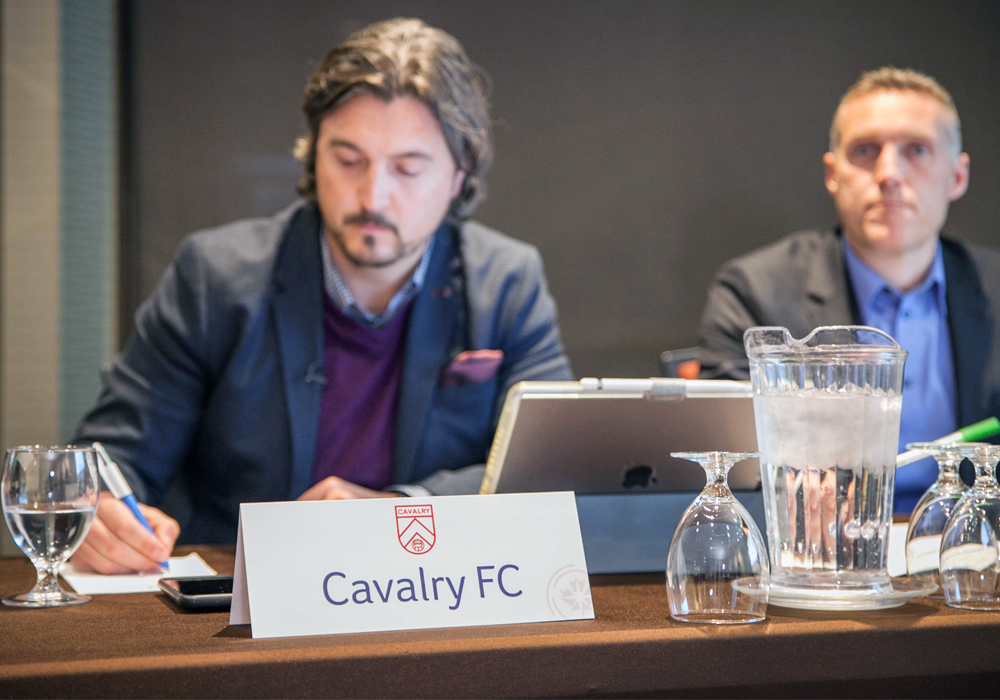 TORONTO – The CPL-U SPORTS Draft is set to take place in Vancouver as the Canadian Premier League’s assembly of head coaches and club staff gathered to take in the 2018 U SPORTS Men’s Soccer Championship at the University of British Columbia’s Thunderbird Stadium.

On Sunday evening, the seven clubs took part in a randomized lottery system to determine the draft order. Each club will be given three total picks over three rounds, with the second round reversing in order in what is known as a “snake draft” – thus, giving the seventh-overall team the first pick in the second round, before the order is reverted back to its original form for the third round.

Here are the results of the blind draft order lottery:

Cavalry FC head coach Tommy Wheeldon Jr. will have the first pick in the CPL’s inaugural CPL-U SPORTS Draft, and says he knows exactly which player he wants to select with his 1st-overall pick, and thus invite to preseason for a chance at earning a contract with his team.

“What’s good about (scouting the U SPORTS Championship) is you get to watch how players move and how well they respond to a bit of adversity,” Wheeldon Jr. told CanPL.ca. “The player we’ll end up going with in Round 1 is that person. We knew of him coming here. He’s gone up in our estimation. We did our background upon coming here and now we’ve done a bit more digging. Being here live has afforded us the opportunity to see more about the player, beyond the statistics.”

It depends on a few variables.

If the Cavs’ boss is looking to draft locally, he might find a few standouts from the University of Alberta, like goalkeeper Connor James or midfielder Ajeej Sarkaria.

Or, perhaps, Wheeldon Jr. is looking to pick the best talent on offer, where players like Jace Kotsopoulos of Guelph, Dylan Carreiro of York University, Daniel Pritchard of Cape Breton and Gabriel Bitar of Carleton have turned heads with impressive showings throughout the season.

Montreal Carabins’ star Frédéric Lajoie-Gravelle may have also earned a nod with his U SPORTS National Championship-winning goal over Cape Breton on Sunday.

With many options in mind, Wheeldon Jr. figures he could select Alberta-based university players exclusively, or instead take a look across the table for the best talent he can find.

On that front, the Cavs’ boss teased he’s considered “a combination of both” for his 1st-overall pick, adding: “Our situation is different from other clubs. What we’re looking for are young players we can potentially see get some minutes in the CPL. We’re looking for some young players because we believe there’s a great bridge here being developed between U SPORTS and CPL.

“I’ve always been a firm believer in the university leagues because it’s a market I’ve fished in with the PDL,” he continued. “As someone who ended up going back to university myself, I’m a big believer in what it will do for the long term for the players. I’m a massive, massive fan of what this will do in terms of giving players a career beyond their careers. I think that’s the biggest piece we have to understand — the future we’re setting.”

Whoever Wheeldon Jr. and his peers select in the CPL-U SPORTS Draft, there remains work to be done as players must impress in preseason camps in order to earn their contracts, whether a Standard Developmental Contract for non-graduating student-athletes wishing to preserve their eligibility, or a Pro Contract for graduating seniors.

“This is your foot in the door. It’s by no means a signature on a professional contract,” Wheeldon Jr. said, to that end. “It’s a foot in the door. What we’ll ask these players to do in their offseason is to not just put their feet up. They have to look at things they need to improve and get stronger at them. When they arrive for training camp they better be ready to push the upgrade button and be a part of a professional environment.”

The full results of the CPL-U SPORTS Draft will be published on CanPL.ca on Tuesday, Nov. 13.