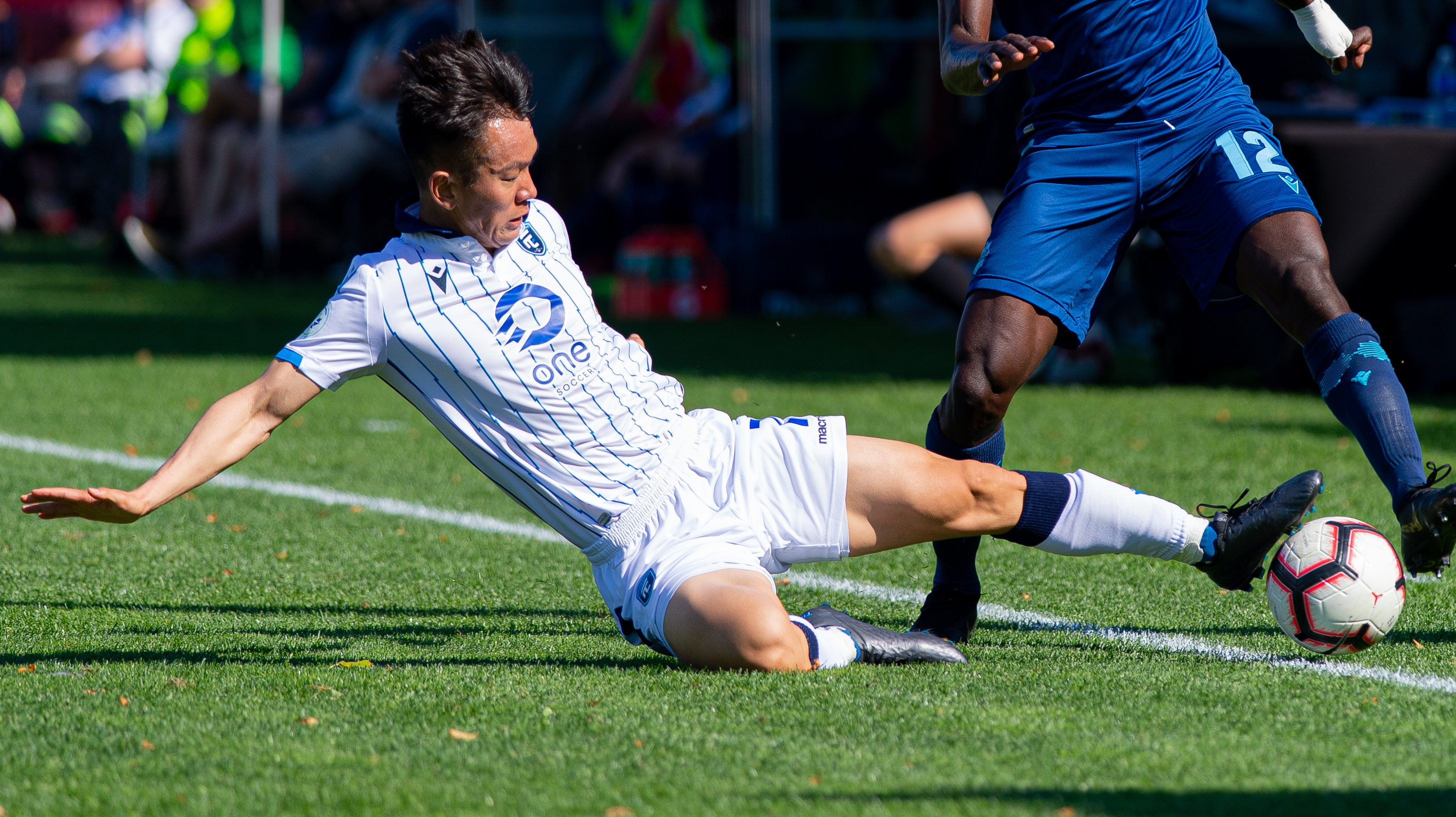 FC Edmonton's Son Yong-chan pushes the ball out of bounds. (Trevor MacMillan/CPL).
How an injury, a video and an apology brought two CPLers together
2019-10-04
by
Marty Thompson, Digital Content Editor (@martythompson_)
News

Your typical Canadian is more apt to offer an “oop” while swerving past someone in the grocery store than dish the apologetics after something more heinous.

Yong-chan collided with Owundi on June 26 during a game in Edmonton, in a far-from-dangerous 50/50 tackle. Still, the South Korean came away with a damaged toe, an injury that sidelined him for 87 days in total. The two faced each other on Wednesday when Forge visited Clarke Stadium, the scene of the “crime,” if you can call it that.

“He kicked my foot, we crashed, his spike hit the inside of my foot,” Yong-chan told CanPL.ca. “It’s tough because we were doing well, and you really want to play.”

Owundi caught wind of the injury soon after from fellow Cameroonian and FC Edmonton fullback Jeannot Esua, and decided he should send Son his best wishes for a speedy recovery.

What followed was the kind of apology you’d expect from that prototypical Canadian: heartfelt, genuine and somewhat unnecessary.

“I sent him the video a few hours after the game,” Owundi told CanPL.ca.

“Son took it very well. He’s a very nice guy. The first time I apologized, he told me not to worry, that stuff like that happens in football. I was relieved with his reaction. (When we chatted again) we had a good laugh about it. I’m happy that he started playing again.”

Yong-chan made his return to competitive action on Sept. 21 in a 3-1 loss to York9 FC. It was the longest ever injury layoff for the 28-year-old South Korean who arrived as one of the more intriguing signings of the inaugural Canadian Premier League campaign. The pick of the lot from the GotGame Open Trials the year before, Yong-chan promised to be one of the fittest players in the league.

The versatile midfielder-defender was feeling the love at home, too, during his layoff, starting with FCE coach Jeff Paulus.

“Sometimes when you’re injured, you feel like you’re out of the team. But I never felt like that,” Yong-chan offered.

“I got taken really well by the club. Jeff was always asking me how I was doing, said I didn’t have to worry about things.”

Same goes for FC Edmonton owner Tom Fath, who Yong-chan referred to as “like a father.”

“Don’t be in a hurry, just be healthy. As an owner, you want to use your player, but he kept saying ‘don’t hurry it,’” Yong-chan said.

Similar to Yong-chan, Owundi came to the CPL with a bit of a reputation after a stint with Minnesota United of MLS.

And yes, this is the first time he’s sent a video apology after an injury.

“In general, I’m someone who apologizes when I feel I’ve hurt someone,” Owundi said.

“That’s my personality, that’s who I am, whether it’s at training with my teammates or in-game situation. This time was special, because the story became public.”

The Cameroonian, now with 18 appearances for Forge under his belt, has been largely spared from injuries in his first year in Canada, save for a hamstring issue sustained, of course, the week after Yong-chan’s damage toe.

“I told (Jeannot Esua) it was karma,” Yong-chan said jokingly.

If Owundi offers a Canadian style of apologies, Son Yong-chan has Canadian irony down pat.

“I hated Bertrand, but now I don’t anymore,” the South Korean said.