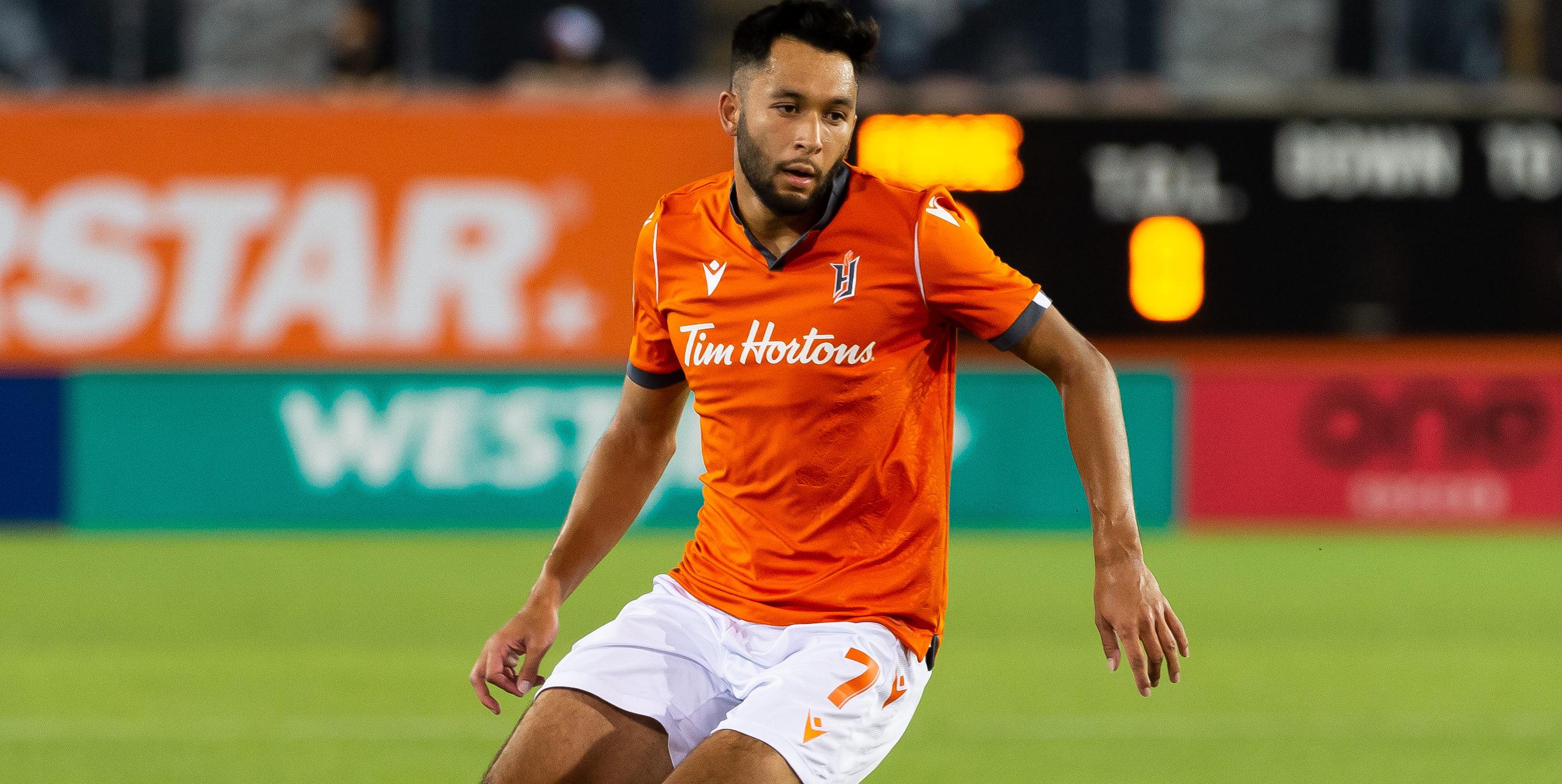 Forge FC returned to the win column with a dominant midweek win over Atlético Ottawa at Tim Hortons Field on Wednesday. Suffocating their opponent with a comprehensive possession style, Forge were patient and professional going forward as they looked to stretch out their opponent. Daniel Krutzen, making his long-awaited return to the starting XI, scored the first with a penalty kick, before young Woobens Pacius scored his first two professional goals in the second half to put the game to bed, and Chris Nanco added one last marker in stoppage time.

Bobby Smyrniotis’ trio of central defenders on Wednesday was composed of Daniel Krutzen, Maxim Tissot, and Alexander Achinioti-Jonsson — all three of whom have seen minutes in central midfield for this club in the past. So, Forge in this match were blessed with a group of centre-backs who are all extremely comfortable on the ball, with exceptional passing range.

When in possession, Forge were able to play in an expansive 3-4-3 that stretched the field out and pulled a usually compact Atlético Ottawa side out of position with their width and ability to hit anywhere on the pitch with a pass. Consider, for a moment, this pass map for just those three players:

Krutzen, in particular, funneled an incredible number of diagonal passes, and Forge’s movement typically gave him at least two or three options — horizontal to a centre-back, up to a fullback or winger, or straight forward to midfielders Elimane Cisse or Kyle Bekker. He finished with a staggering 97.3% accuracy with his passes, followed closely by Achinioti-Jonsson (94.5%) and Tissot (85.7%).

With those three so comfortable on the ball, Forge were able to give the fullbacks and wingers much more freedom to make forward runs and look for space to exploit, and the two central midfielders were able to roam between Ottawa’s lines as well. Everything stemmed from that back three in this game, as Forge developed an extremely strong base for moving it forward.

“We knew when we were putting these guys out there that that’s what we’d get from them, just fluid passing, a bit of movement,” Smyrniotis explained postgame. “We had a left footed guy on the left side, a right footed guy on the right side to keep everything balanced. We allowed Johnny Grant and Kwame Awuah to get a little bit higher up the pitch and create those dangerous moments that way. What we thought before the game was what we saw in the game: a very good free-flowing three in the back that can move the ball around with pace, because it’s important. Sometimes when you play teams that drop into a lower block, one thing you need is the ball to move quickly. The slower the ball moves, it’s harder to open up the gaps in the spaces.”

This particular defensive trio hadn’t been seen before today, and Smyrniotis said knocks to Garven Metusala and Dominic Samuel made the experiment a product of necessity, but it worked tremendously — something he’ll keep in mind for future matches.

“They’re an excellent three today, and it’s also good to see because it’s something new for us today, seeing those three guys there’s also a little bit of a new setup, so now it’s not just something you’ve seen on the training ground but you’ve seen it in match action and it’s worked, and it’s another thing we can use going forward.”

Though they suffered for possession for most of this game, Atlético Ottawa were not without their opportunities on the counter-attack. Forge did turn the ball over several times — which can happen to a team making so many passes — but Ottawa weren’t able to turn many of those into shots on target.

Part of it is certainly due to Forge’s rapid contraction into a tight 5-4-1 formation upon losing possession, but Ottawa didn’t look as dangerous as they could have going forward despite getting decent numbers forward at times. Mista has called in recent weeks for his team to be a little braver in attack, but perhaps this wasn’t what they meant; six of their 10 shots came from outside the box, as a few individual players seemed at times to force a shot rather than look for a pass to a more dangerous position.

Bravery in attack might be better demonstrated by some more incisive passing and through balls, rather than rushed attempts from distance; Ottawa seemed to be missing that last little piece of link-up play in the final third, as they have done on several occasions this season.

Mista added that he had tried to give his side a little more firepower in attack with his halftime changes, as Ryan Telfer moved to left wingback playing behind a litany of other attackers in Malcolm Shaw, Brian Wright, and Raul Uche, but it didn’t have the desired effect, and instead seemed to leave Atleti exposed at times as they tried to get forward while chasing the game.

Next man up Pacius makes full use of opportunity

Woobens Pacius signed for Forge on August 8th, and before tonight he’d made just three appearances for the club (all of them short outings off the bench). With usual striker Mo Babouli injured and Josh Navarro having played a lot of minutes recently, the 20-year-old native of Terrebonne, Quebec stepped in as an out-and-out number nine for this game and he made full use of his opportunity.

Both of Pacius’ goals showed excellent striker’s instinct, with his run toward the net for Kwame Awuah’s cross and then his movement to get on the end of Jonathan Grant’s through ball for his second. His finishing ability, pace, and ability to get into good areas make him a very impressive young forward — as does his hold up play and distribution, on a night when he was accurate with nine out of 11 passes, many of them with back to goal. It’s remarkable how well a young player who just got to this club has adapted to the circumstances — especially, as he mentioned postgame, considering that he’s spent most of his playing career in Montreal.

“Woobens is a guy that we think very highly of,” Smyrniotis said of his striker. “He’s come in here and he’s gelled well with the team; he’s a guy that’s come in late to the group, but he’d been brought in to do exactly what he did today. To score goals, be a little bit more dynamic in getting in behind defenders, just popping up in the box behind defenders and that’s how he scored both of his goals today… He’s a new pro, only a few games in, so I think that’s excellent for his confidence and we expect a lot more from him going forward.”

After Forge started the season struggling to score from open play, the dam might have truly broken open on Wednesday. With Pacius now offering himself as a legitimate option to lead the line, the already-deep defending champions have added yet another weapon to their vast arsenal.

Easy to pick the man who returns from injury and scores, but Krutzen was just about perfect. He missed just two of his 74 attempted passes (more than anyone else on the team), and made three tackles, three clearances, and two interceptions while setting the standard for Forge’s ball movement out of the back. Bobby Smyrniotis called him the best centre-back in the CPL postmatch, and his return will be a massive boost to the champs going forward.

Both clubs will be back at home this weekend after the midweek fixture; Forge will host 905 Derby rivals York United at Tim Hortons Field on Saturday, August 28 (4 pm ET), and Atlético Ottawa will take on HFX Wanderers FC the following day at TD Place (1:30 pm ET). Watch all matches live on OneSoccer.