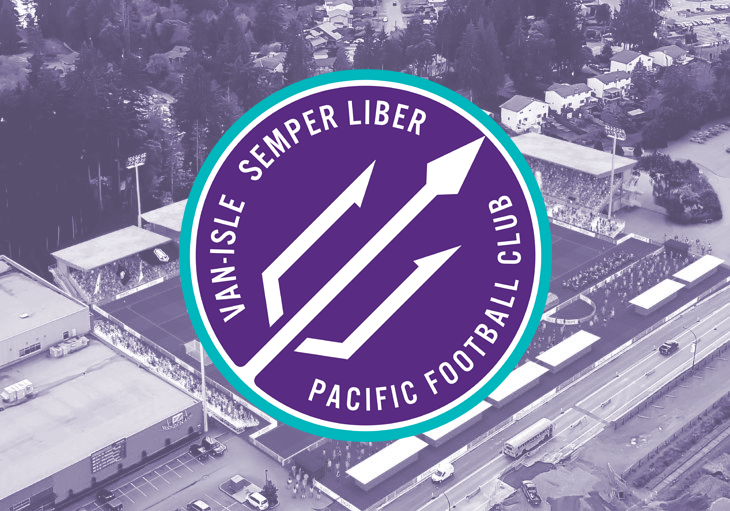 VANCOUVER ISLAND – With the inaugural season of the Canadian Premier League (CPL) quickly approaching, Pacific Football Club’s secondary logo is now officially on full display. The secondary logo compliments the club’s main crest and features the trident and colours that capture the culture and philosophy of Vancouver Island’s club.

The primary object within the secondary emblem is that of a trident. Traditionally, the trident has been used for spearfishing. It also is a mythological symbol for having control of the ocean.

“As Vancouver Island’s club we wanted to bring a symbol that captured and conveys a sense of strength and community,” explained club president Josh Simpson. “We are embracing the Island culture and wanted to find a symbol that would speak to that.”

The trident exemplifies the strength and courage of Vancouver Island, as well as the fierce weather that can be attributed to the Pacific Ocean. The Pacific has shaped the Island, its players and the people that come from its shores.

The words circling the roundel include Van-Isle, Pacific Football Club, and the phrase ‘Semper Liber,’ which translates to ‘Forever Free.’ This motto describes the freedom and culture that Vancouver Island was built upon.

“Our strength is within our community,” Simpson said. “We are excited to roll out our alternate logo. The culture of the Island is unique and our logos are key pieces to our club’s identity.”

Very proud of our Club Shop. A massive thank you to the team at @urbansign and @davannahs for creating a fresh and innovative space. Shout out to our Pacific FC friends, family and staff for their support through this project! Go #PacificFC ?

If last Friday afternoon was any indication, Pacific Football Club and its recently opened downtown Fan Store are sure to become a go-to destination for Vancouver Island residents. The Canadian Premier League club will kick off its inaugural season in April, but the club has already opened its merchandise and ticketing headquarters in anticipation of next year’s inaugural season.

Featuring a modern aesthetic and located in the heart of downtown Victoria, Pacific FC’s flagship store carries a wealth of club products that appeal to both the casual and hardcore fan. Included on the floor displays were renderings of the soon-to-be renovated Westhills Stadium, located in the centre of scenic Langford. The stadium will boast 6,000 seats when renovations are complete; the stadium will slowly transition into a permanent setup and will challenge for arguably the most picturesque home ground in all of the league.

“The turnout we received on Friday was nothing short of outstanding,” Simpson added. “To have the number of interested people come out like they did in the afternoon was very encouraging and a testament to the work that we’ve all put in getting to this point.”

The downtown store is an ideal location for downtown shoppers, and should be a must-stop location as the holiday season fast approaches.

“We worked very hard to secure the ideal destination for our store that would appeal to our customers,” Simpson finished. “We’re very happy with how it has turned out and look forward to continuing to serve Vancouver Island soccer fans.”