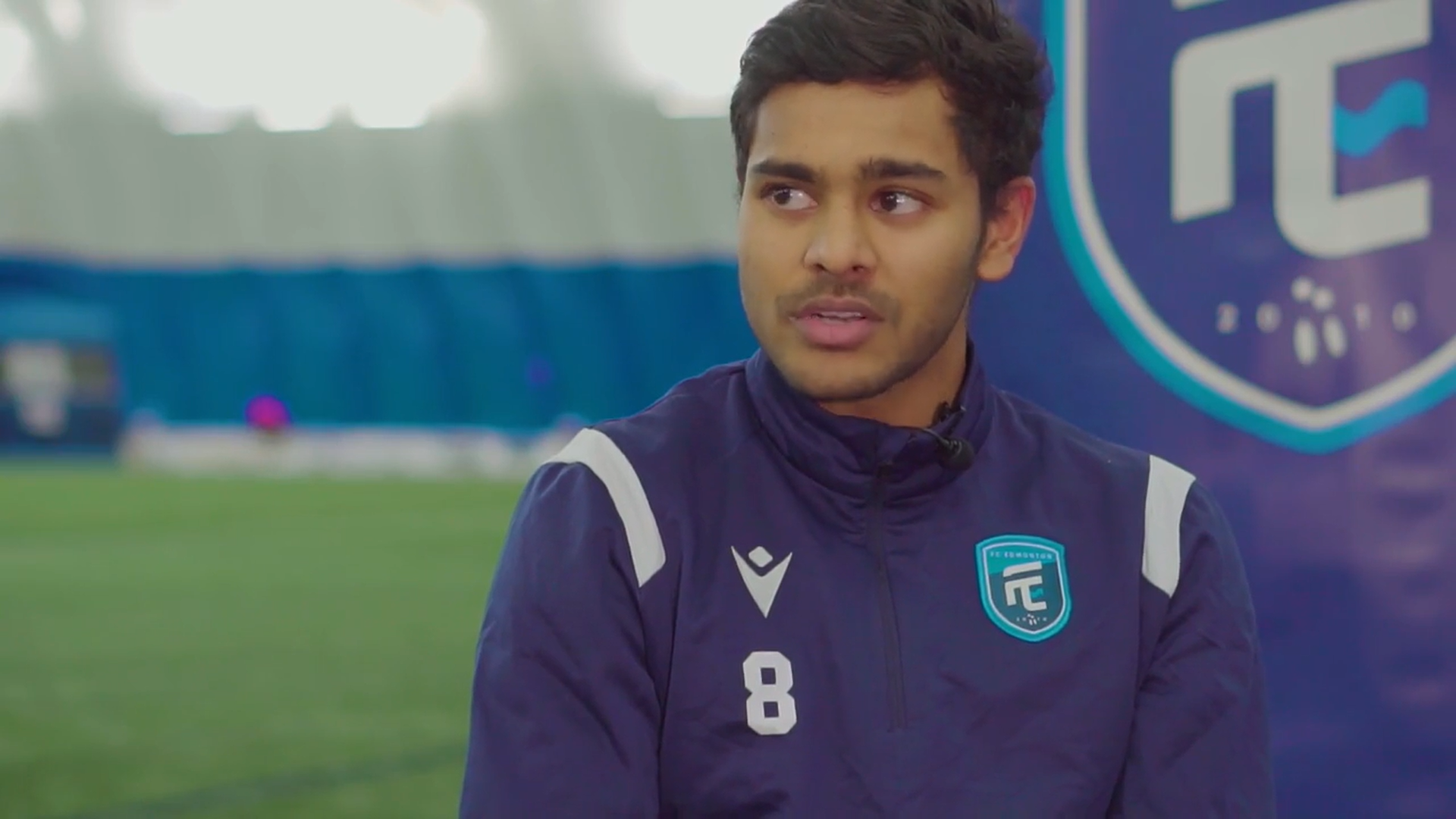 FC Edmonton’s players are not shying away from the challenge at hand with their club this year.

By now, the story is well-known; the team saw massive roster turnover this offseason as upheaval off the pitch and a search for new ownership brought no end of difficulties for the organization. As a result, just five players remain from the 2021 roster — three of them now on loan from other CPL clubs.

A more optimistic view of the situation, though, would offer that this Edmonton team under head coach Alan Koch is now a land of incredible opportunity. Its roster is full of players either just getting their foot in the door at the professional level, or trying to rejuvenate their pro career. Those that have come on board for this uniquely challenging project in Edmonton have shown belief in what a season like 2022 — with no real expectation of success in the standings — can mean for players.

Shamit Shome, a 24-year-old Edmonton native, is one of those returning players, now with the club on loan from Forge FC. He was one of the club’s biggest signings of the 2021 offseason, coming from then-Montréal Impact with 45 games of Major League Soccer experience under his belt and two Canadian men’s national team caps from January 2020.

Shome’s pro career actually began with FC Edmonton — the NASL version — in 2016, which helped him catch the eye of Montréal. He returned to the club, now in the CPL, last season to play some more consistent pro games, which he did, with 28 matches played and 2,186 CPL minutes (second-most on the team). It wasn’t quite the year he’d been hoping for, though; coming into the league as one of the marquee offseason signings, the best version of Shome didn’t quite materialize.

“I learned a lot about myself,” Shome told CanPL.ca about last season. “When things don’t go your way, what can you do about it? You can either mope about it, complain about it, or you can just keep putting in the work. That’s kind of what I’m going to bring into this year, is just come in day in, day out, and put in the work. Last year I was a bit on edge too, I was putting a bit more pressure on myself to be the guy and when we weren’t having success it had a bigger toll on me. This year, I’m coming in a lot more relaxed and just enjoying every moment playing back home in front of my friends and family, hopefully having fun and playing a bit more relaxed, and hopefully that’ll bring the best version of me out.”

This time around, Shome is entering the year with a different mindset. He’s embracing his role as one of the more experienced players on the team, hoping he can impart some wisdom on the younger players in the group. Shome took some time during the offseason contemplating whether it would be right for him to return to the club, but ultimately he chose to stick around with Koch’s project.

The 24-year-old explains that he came into training camp a little before officially signing to assess the situation, and he was impressed by the commitment he saw from the group and the coaching staff — if he wasn’t confident in it, he admits, he might not have come back.

“It’s a bit of a different situation to where we started last year, but at the end of the day it is what it is and we’re just gonna build from the ground up,” Shome said. “The beauty is it’s a fresh sheet of paper, and I’m just trying to play my part and help the team grow, and do as good as we can this coming season.”

He added: “That was a big thing for me, staying back here, representing FC Edmonton especially during tough times. It’s something that I’m willing to do, and I think with everything the club’s done for me, it’s my time to give back and hopefully being here I can be a role model for the younger kids coming up.”

With so many young players in the group — from T-boy Fayia, to Felix N’sa, to Kairo Coore — Shome feels he has a responsibility to help them, having seen first-hand what it takes to make the jump to a higher level. Certainly, that ambition is something that drives players across the entire CPL.

And according to Shome, it’s the work ethic that will set players apart.

“I think that hunger and that desire goes a long way. Soccer’s a lot more than just technique and quality and how talented you are; it’s about how much you’re willing to put in the work,” he said.

“The next level isn’t a thousand times better than us; it’s probably three, four, five percent, right? So it’s just about what can you do to make up that one or two or three percent to get from this level to a higher level. There’s a lot of guys in the league that want to do it, myself included, and it’s just about who’s willing to put in the work.”

So, the Eddies march onward into an uncertain future, doing all they can to shut out the noise and build something in the Albertan capital.

“There’s no expectations,” Shome concluded. “Nobody expects us to do well if we’re being honest; I don’t think anybody in the CPL expects we’ll do anything special. But that’s the beauty of soccer. You know, a team that starts from the ground up with nothing, they can do everything if they’ve got guys that are together, that are willing to put in the work. I’ll even go out there and say, look at the national team. They might not have the best players, they’re not all playing in Europe, but they have that unity, that cohesiveness, that brotherhood, and that’s what drives them forward. If we can replicate an inch of that with Edmonton it’ll go a long way.

Speaking of the national team, we’ve seen recently just how much appetite there is in Edmonton for the sport. Now, the Eddies will be desperate to rekindle that same passion.

“Hopefully we can change the narrative with FC Edmonton and get more of the fans out, because Edmonton is a soccer city,” Shome said. “You saw it when it was minus 30, I was out there cheering with 50,000 other people, it’s a soccer city. We need to tap into the popularity and have the success to be able to drive that.”

To see CanPL.ca’s interview with Shamit Shome and T-boy Fayia in full, go to YouTube.com/CPLsoccer.

For more CPL season preview content, featuring our eight clubs each day leading up to the first round of matches, check out @CPLsoccer on social media or click here.