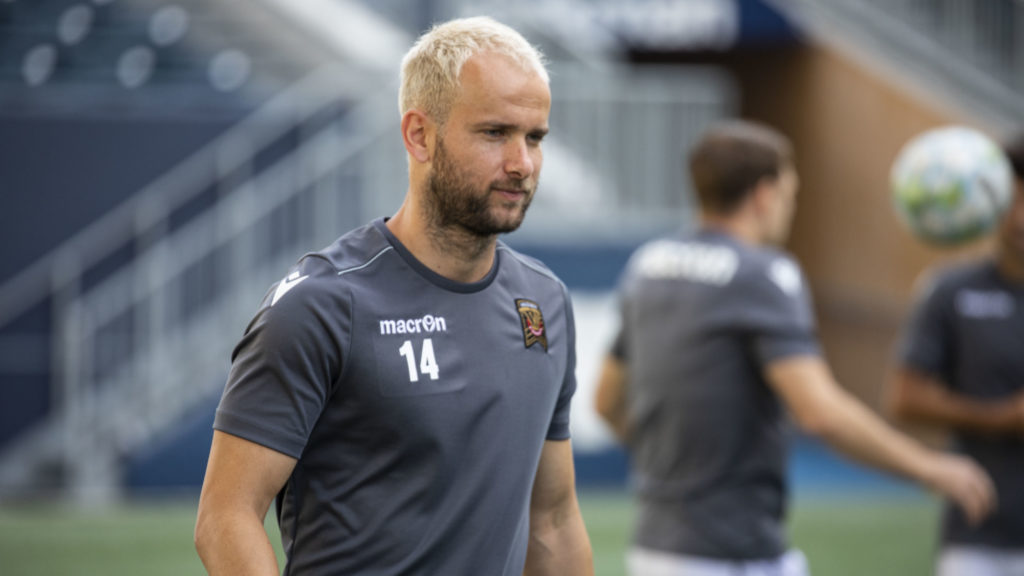 Valour FC's Stefan Cebara.
Stefan Cebara on re-signing with Valour: ‘I owe it to the team to come back’
2020-10-30
by
Ed Tait, CanPL.ca contributor
News

There were the weeks upon weeks of training coupled with the endless hours in Zoom meetings. And the waiting. All that waiting.

So, the start of Stefan Cebara’s experience with Valour FC in the build-up to the COVID-19-delayed Canadian Premier League’s 2020 season was more than just a little challenging.

In the end, though, there was something about the experience of all of it – plus his 459 minutes of action spread out over his six matches at The Island Games tournament this summer – that convinced the versatile 29-year-old midfielder he wanted more time in Valour’s maroon, gold and black.

And it’s why he has scribbled his name on a 2021 contract extension with the club.

“My decision was quite simple: I want to win the Canadian Premier League and I believe in the organization, the coaching staff and that the players have what it takes to compete for the championship next season,” Cebara told CanPL.ca from his off-season base in Windsor, Ont.

“I knew there was interest from other teams in me, but with the 2020 season being as short as it was there was so much more I wanted to show as a player and for us as a team. I think with a proper 28-30 game format I can express myself even more with Valour. I owe that to them.

“It was Valour who gave me the opportunity to go out on the pitch. I owe it to the team to come back and show even more what I’m capable of.”

The Croatian-born Canadian had flashed enough in Prince Edward Island that Valour management wanted him to return. He began the tournament along the back line, helping provide a veteran and stabilizing influence to a remade defence.

But he also lined up in the midfield and look comfortable there, too, pressing forward in the attack.

That much was visible to anyone who watched Valour at The Islands Games. What might not have been as obvious was how much getting back on the pitch again – a contractual issue kept Cebara from playing in 2019 – re-energized him and his passion for the game.

“Playing with Valour at the Island Games resurrected my career,” he said. “Even with us playing just seven games, it really did resurrect my career.

“Football has a funny way of forgetting players very soon. Sometimes younger players don’t understand that, but as you get older and your careers become shorter the game can forget you very quickly.

“I was lucky that Valour gave me the opportunity to show I can still play at a high level. I believe my career is still ahead of me.

“I didn’t want to stop playing after the tournament,” Cebara added. “It was like, ‘Man, I want to get back to footy as soon as possible.’ The break, this offseason, is going to be so long it’s going to be mentally tough waiting until next season. I can’t wait until we start training again and I’m going to keep myself as fit as possible because I’m very much looking forward to next year.”

Cebara is the fifth player to officially re-sign for 2021, following the announcements that Andrew Jean-Baptiste, Masta Kacher, Brett Levis and Raphael Ohin will all be returning.

To a man, all of them have said the same thing: getting as many players back for next season will be critical after a solid foundation was poured in 2020.

“There’s so many different personalities and characters on this team and we got along very well,” Cebara said. “The coaching staff… just because you’re a good footballer didn’t necessarily mean they were going to sign you. They seemed to take into consideration the players they brought in because we all had similar goals or were at the points in our career where we had something to prove. We all had a positive outlook, too, on the season.

“(The Island Games) felt like a warm up. We had some kinks we had to work out, but it felt like we were getting better with each game. If we had a proper preseason I think we could have gone a lot further in the tournament, if not won it. We out-played a lot of the teams in the tournament… we didn’t put the ball into the back of the net as much as we should have, but that’s something we’ll improve on. That won’t be an excuse next season if we’re not successful.

“A lot of us haven’t had the chance to play in front of our fans in Winnipeg. I’m looking forward to that. Even though we didn’t play at IG Field, you could feel the love for the club from the fans on social media. Even though we didn’t see them and experience them at the games, you can tell there’s an energy and atmosphere there.