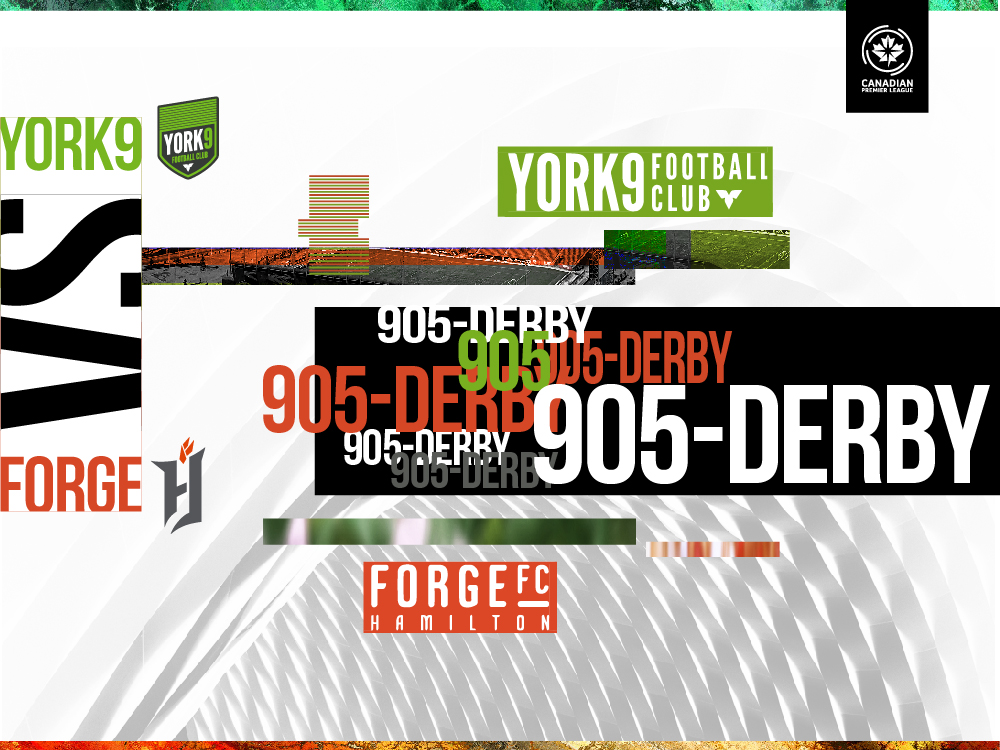 TORONTO — Seventy kilometres: The shortest gap, for now, between opposing Canadian Premier League clubs, a distance that will foster a “905 Derby” between Forge FC and York9 FC.

A short drive — excluding rush hour — like the one between Tim Hortons Field or York University is commonplace most places in the world.

Now, it’s an anticipated fixture that’s coming to the CPL.

“We’ll send a large group of fans down there when we play them and vice versa,” York9 FC head coach Jimmy Brennan told CanPL.ca.

Brennan witnessed a derby or two in his time as a player and coach. The 41-year-old participated in the East Anglian derby when he featured for Norwich City against Ipswich Town. He also contributed to the East-Midlands derby when the Canaries visited or hosted Nottingham Forest. He referred to the Bristol derby as “violent.”

While both sides of the looming Ontario rivalry won’t be out for blood, York9’s bench boss envisions heated contests when he meets Bobby Smyrniotis’s side.

“Hopefully, we can set up something like that here in Canada, where we have a great derby and make an electric environment,” Brennan added. “Over there, the fans on the street stop you and ask you about the derby and tell you how important it is for them to win it.

“You get fired up. It’s everywhere and you can’t get away from it. The fans tell you just how important it is.”

Of course, the Hamilton-GTA rivalry already has a storied past. Iterations of the CFL’s Ticats-Argos grudge game have been happening for well over a century, with the contemporary rivalry becoming the centrepiece of gridiron’s Labour Day Classic.

“We want to come in and prove to (the GTA) that we can do something special,” Forge FC’s Kyle Bekker said.

The Canadian international is no stranger to Canadian derbies, suiting up for both Toronto FC and Montreal Impact in the Canadian Classique — also known as the 401 Derby — on multiple occasions.

A matchup largely dominated by Toronto’s MLS club in the early years, Bekker was part of the Impact side that showed some bite in 2016 by taking its first win at BMO Field and getting in some heated scuffles along the way.

“I love when fans get on the other team’s back,” Bekker told CanPL.ca. “When the team you hate is screwing up and you hear the fans, it gives you the feeling you have an extra player. When you have a good, lively crowd for a team you dislike, it makes all the difference.

“You can feel a derby in warmups; More fans are there early and you’re already getting that buzzing feeling. You can’t manufacture that.”

Additionally, Forge’s Chris Nanco is hoping to get that “buzzing” feeling away from home, specifically down the road in York Region.

Nanco played in several derby fixtures earlier in his career, including a Bethlehem Steel-New York Bulls II matchup that saw supporters make the short drive between Philadelphia and New Jersey.

“I think rivalries are a very important thing — derby matches bring out fans, the hunger and players,” the North York native added. “It will be a fresh rivalry but at the end of the day, we’re defending our home and they’ll be defending theirs.

“You could have a long season where players are getting fatigued but when a derby match comes around, they give that extra lifeline to the players, fans and the organization. It recharges your batteries.”

Prepare for things to be charged when Forge FC and York9 come together later this year.