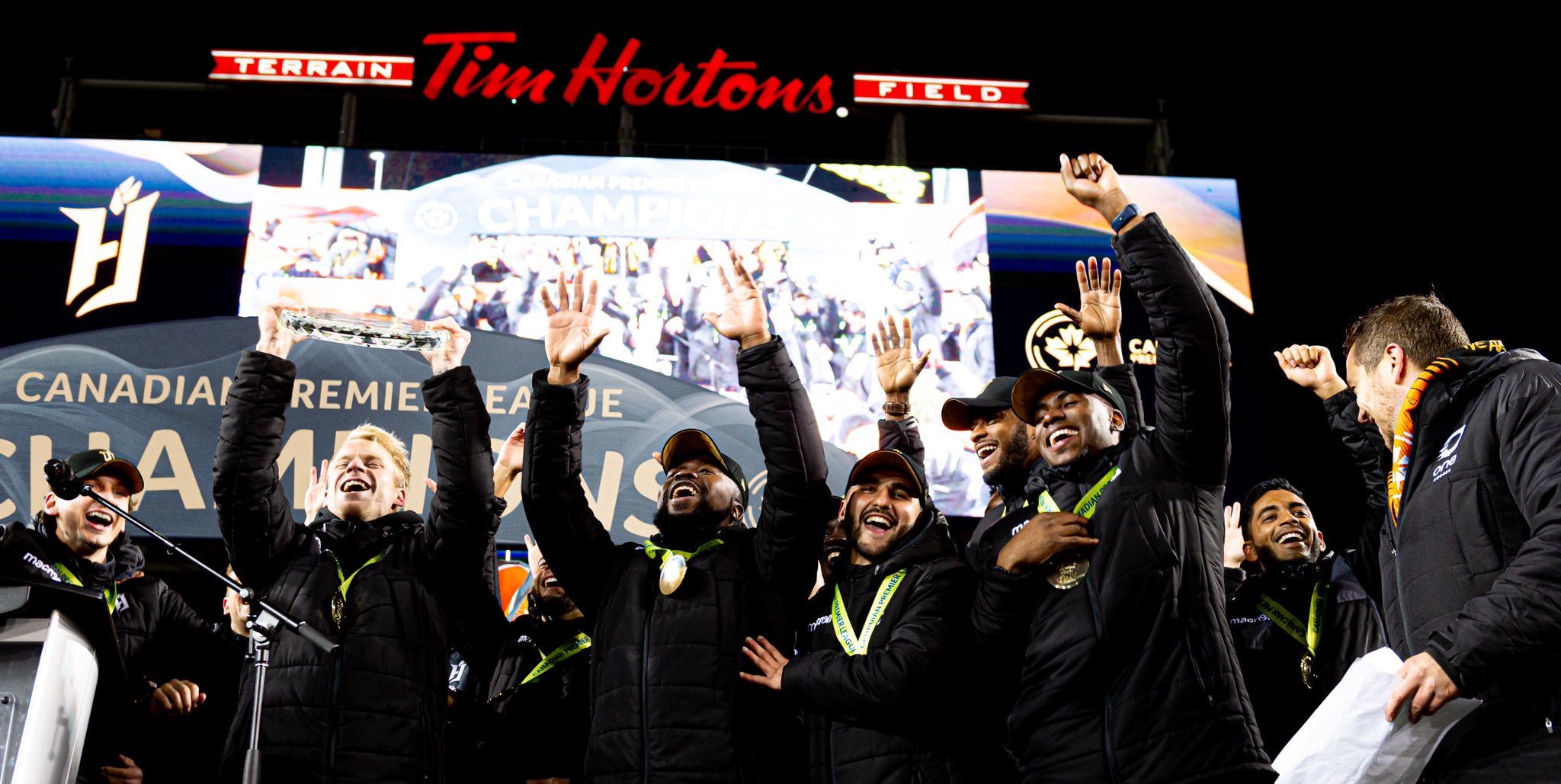 HAMILTON – Perhaps it’s only right that a few snowflakes fell on the CPL’s first championship rally.

Forge FC joined their fans on the frigid Tim Hortons Field turf on Thursday night to celebrate their defeat of Cavalry FC in the 2019 Canadian Premier League Finals, and the mood was, predictably, jubilant in spite of the cold. Players, coaches, and even Hamilton mayor Fred Eisenberger addressed hundreds of orange-clad fans in high spirits.

The Barton St. Battalion supporters group hailed their conquering heroes with songs and pyrotechnics from behind the stage, where captain Kyle Bekker saluted the throng of supporters. He played along with their songs about his now-famous elbow from the CPL’s inaugural match, grinning as he called it a “phantom elbow.”

Tristan Borges — moments after revealing he’d been warned not to swear on stage — drew perhaps the biggest cheer of the night by declaring that, “It’s been a great (expletive) year, man.”

Even Forge coach Bobby Smyrniotis, reveling in the spoils of a hard-fought victory, joined the Battalion in song. His voice swelling with pride, Smyrniotis revealed that the club received congratulations from the very pinnacle of world football, a letter from FIFA President Gianni Infantino.

Smyrniotis read aloud from the letter: “I was delighted to hear that Forge FC have been crowned 2019 champions of Canada. It gives me great pleasure to congratulate them on their first-ever championship title, won in the inaugural edition of the Canadian Premier League.

“On behalf of the international football community, I take this opportunity to thank Forge FC and the Canadian Soccer Association for spreading the positive message of football, and fostering the practice of the beautiful game that unites us all.”

Amid the storm of elation, though, both Bekker and Borges took a moment with CanPL.ca to try to sort through their emotions.

“I know a lot of the guys have said it’s kicked in for them, CPL champions, but I think for myself it hasn’t,” Borges admitted.

“Once I get some time to unwind and think about what we really did, the history we just made, I’m going to enjoy it a little bit more, but I’m just trying to enjoy the moment.”

The league’s top scorer thumbed his CPL winner’s medal, proclaiming that it won’t likely be leaving his neck for the next couple of weeks.

Fantastic scene in #HamOnt tonight. Thank you to everyone who came out!#ForgeFC | #CanPL pic.twitter.com/QFCcWuV91I

Bekker, meanwhile, has come to terms with the gravity of Forge’s accomplishment.

“We knew right after the game, we felt it,” he said. “This matters.”

By the looks on players’ faces on Thursday, that sentiment is unanimous.

Reflecting on the season-long journey to this point — from the end of one winter to the beginning of another — the skipper still can’t quite believe it all.

“We started pre-season here, when it’s freezing cold, then the Dominican with the boys, and you haven’t lost a game in pre-season,” he recalled. “You’re scoring all these goals and everyone’s buzzing to get to the first game. Then 17,000 people show up and you can’t actually believe that that many people in Hamilton are buying into what you’re doing.”

“We didn’t have one good day of weather for the first few games,” Bekker added, “and still these guys showed up and made noise.”

It certainly hasn’t been all smooth sailing since those positive beginnings, of course. Forge had some rough patches, bounced from the Canadian Championship by Cavalry FC and stumbling at home to begin the Fall season.

So, Borges is humble in choosing what will stand out to him most from 2019.

“I think what makes it more special in any championship you win, any athlete will say it’s the process,” he said. “You have to fall in love with the process. We went through a lot of ups and downs to win this championship.”

Even individually, Borges’ Golden Boot-winning season had its dark moments as he struggled with injuries, plus his red card (later overturned) in Leg 1 of Finals 2019.

They may have fallen short in the Spring and Fall seasons’ standings, but Forge loses no sleep over that detail. They were neck-and-neck with the Cavs for much of the year, and they thoroughly outplayed them in the Finals.

Bekker continued to reflect on that roller-coaster of a season, quick to remind CanPL.ca of Forge’s comeback win against Valour FC in June, and their extraordinary run to the round of 16 of the Concacaf League.

Given the final word of proceedings on stage before hoisting the North Star Shield yet again with his teammates, Bekker let his euphoria out one last time.

“Hamilton!” he declared. “We just went and done it.”