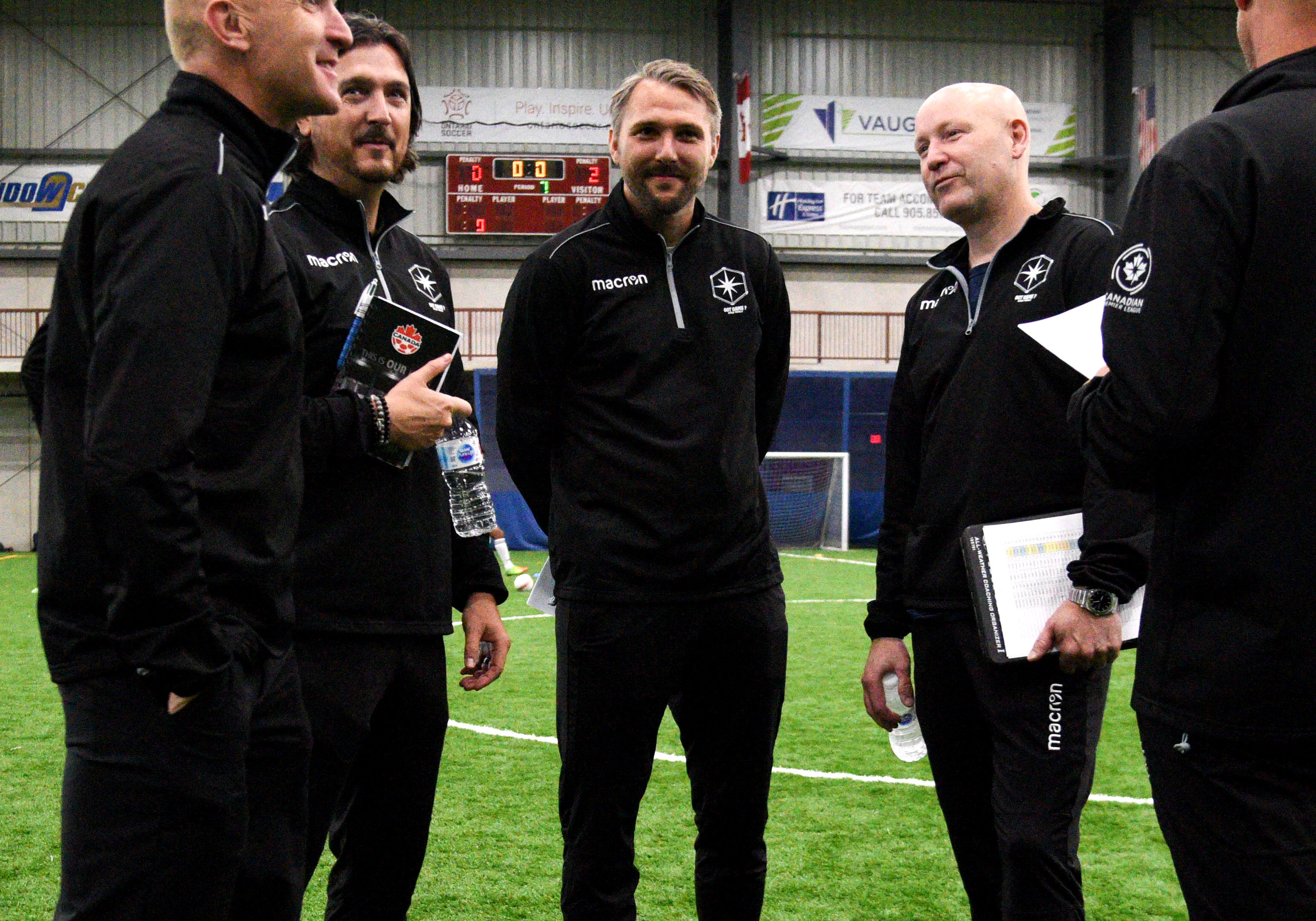 What do the Canadian Premier League’s head coaches know about each other?
2018-11-22
by
Armen Bedakian, Supervising Editor

Over the last few months, the head coaches of each of the Canadian Premier League’s founding clubs have worked hand-in-hand on a number of occasions, conducting the #GotGame Open Trials from coast to coast, assembling for the inaugural CPL-U SPORTS Draft, and trading friendly swipes at the 2018 CPL Coaches Summit.

But with the CPL’s first season inching closer every day, those friendships – some deeply rooted, others newly forming – must be put aside as the spirit of competition heats up across Canada.

With that in mind, here’s what the CPL’s head coaches – sans Forge FC’s Bobby Smyrniotis, who had yet to be hired at the time of these interviews – think about one another:

Respect for Hart resonates throughout

While most of the coaches knew enough about each other to share informed tactical opinions, all were in agreement when it came to HFX Wanderers FC manager Stephen Hart.

It’s plain to see that the veteran of the group has the respect of his peers: Cavalry FC head coach Tommy Wheeldon Jr. called Hart “an exceptional character,” telling CanPL.ca that the former Canada and Trinidad and Tobago manager “brings experience and is also a proud part of the Halifax community,” making an away trip out east something of a daunting task.

Valour FC’s Rob Gale said the way Hart “carries himself even in the harshest of circumstances makes him a role model in how to act and how to treat players,” a sentiment that FC Edmonton boss Jeff Paulus agreed with, telling CanPL.ca: “He’s one that really gave me this passion to become the best coach I could become.

“I was in awe of his knowledge of the game,” Paulus added.

York9 FC head coach Jimmy Brennan has had plenty of face-to-face time with the Haligonian head honcho, having played for Hart during his playing days with Canada’s national team.

“He’s a good friend and a great individual,” Brennan told CanPL.ca, of Hart. “He’s got a great eye for football, and really understands it. He’s taught me, educated me, so I think I’ve got one up on Harty. I know the way he’s going to play, unless he decides to change 180. But I can’t see it because his style is in his DNA.”

To that end, Hart was appreciative of his peers singing his praises, hailing the likes of Wheeldon Jr., Gale and Paulus for their dedication to Canadian soccer.

But he’s got his eye on one particular reunion.

“I’m interested to see what Jimmy does,” Hart said. “He was always having discussions with us as a player, pointing out others who were doing well on the ball, but I never really expected him to go into coaching. Then I heard he was working with young players at Toronto FC and I thought that was fantastic, because he has so much experience.”

When the season begins, the CPL’s head coaches will only get a glimpse of one another on the sidelines, where cordial handshakes and an occasional barking match would add drama to each occasion.

Certainly, the “Al Classico” rivalry between FC Edmonton and Cavalry FC will be one to keep an eye on, as Paulus says he and Wheeldon Jr. can draw on nearly 12 years of “fantastic” banter in the days leading up to what could be the league’s “best derby.”

“He’s got beautiful hair so he’s my nemesis right off the bat,” Paulus said of Wheeldon Jr., when asked about this budding sideline rivalry.

Wheeldon Jr. countered: “I’m sure if I finish above Jeff in the league, he’ll have to wear a Tommy wig in public, and heaven forbid, if he finishes above me, I’m going to have to put a bald cap on.”

Ever the jokester, Gale offered an unusually serious take on his peers in the prairie provinces.

“They understand the bigger picture. Philosophy-wise, many of us are similar in that way. We’re player-centric and bring a holistic approach to the game, but within that, there are so many nuances.”

If Gale is pointing out familiarity and coaching similarities among some of his peers, the opposite would be true when considering Pacific FC’s Michael Silberbauer.

The Danish midfielder is stepping into his first role as a head coach with the upstart club on Vancouver Island, and is an unknown quantity to his new cohorts.

Of course, the opposite is true for Silberbauer, who admitted he didn’t know much about his peers aside from Brennan, who enjoyed a playing career in Europe.

Brennan himself can only speculate about the style of his adversary on the west coast, offering that Silberbauer “will probably bring that Danish hard-work ethic and grit” to his team.

But for Silberbauer, being an outsider has some perks.

“It can be an advantage, but it can also be a disadvantage,” Silberbauer offered. “Knowing your opponent can be very helpful. But they don’t know what to expect from me, either. I see it both ways, so I’ll need to do my homework.”

In any case, Brennan concluded, all the coaches will strive to maintain a “great deal of respect for each other” throughout the season.

“Behind the scenes, we love to have a joke because we have a tremendous passion for this game of football, but we know when to switch off and focus at the task at hand,” Brennan said.

“Come game time, it won’t be friendships, I’ll give you that for sure.”