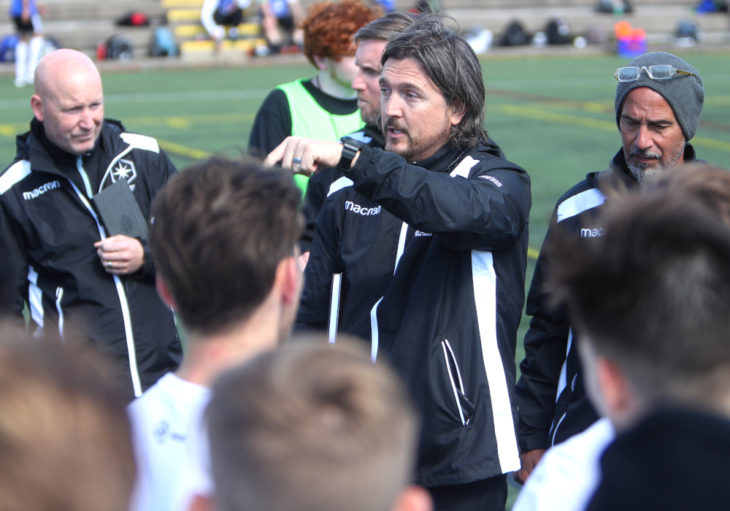 “Character-first” is the mentality that coach Tommy Wheeldon Jr. is implementing when considering the very first signings in his club’s history, and for the Cavalry FC bench boss, he’s found exactly the right characters ahead of Thursday’s official player announcements.

One player, he told CanPL.ca, will be “a cornerstone” of his team, describing him as a versatile, defensive-minded player who brings a veteran presence to his newly-forming squad.

“My first player is someone that’s very experienced,” Wheeldon Jr. teased. “He’s got a good connection to Calgary, which speaks volumes when you’re launching a new team. It’s important that somebody’s going to lead from within, and I believe this player can.

“He’s one of the best professionals I’ve gotten to know.”

Though the player is described as more seasoned, Wheeldon Jr. was confident he has “several years left” in the professional game, having plied his trade domestically and in European leagues since the age of 17. He added that the player will “affect the outcome” of most of the games he plays with the way he leads the team.

But he won’t be alone, as Cavalry FC has also put pen to paper on a second player, who Wheeldon Jr. revealed is younger and more “dynamic” up field, adding he already possesses professional playing experience at various levels of North American soccer.

“We don’t have many players like him in Canada,” Wheeldon Jr. said of his second of two initial signings. “He offers great ball skills, great control, and he’s phenomenal at turning and running to get past players.

“He scores and creates but not only does that, he offers himself to the team. He’s an exciting player to watch.”

The two may differ in age and position, but they do have one common thread – as with any of his signings, Wheeldon Jr. says these two bring the right character to his team, above all else.

“When you’re building from scratch, you need the right people,” Wheeldon Jr. said. “These two players will epitomize the type of people in the community, the type of players on the pitch, and the type of professionals in and outside of training that we want.

“I couldn’t be happier to name these two, because we’ve got one experienced player and one up-and-comer.”