In the above video, CanPL.ca chats with Alan Simpson, founder of LSSE, about bringing a CPL club to Saskatoon.

The Canadian Premier League is headed to Saskatchewan.

On Friday morning, the CPL revealed it has awarded the exclusive rights to an expansion club to Living Sky Sports and Entertainment Inc., a Saskatchewan-based company. The deal in principle is contingent upon LSSE building a soccer-specific stadium that meets the league’s standards.

LSSE has identified Prairieland Park in Saskatoon as its preferred site for a stadium. Prairieland Park is a 136-acre area located in the southeastern part of the city that hosts such events as the annual Saskatoon Exhibition, Western Canadian Crop Production Show, and horse racing at Marquis Downs. There is no specific timeline for the construction of the stadium.

“By acquiring the exclusive rights to a CPL expansion club, we can immediately begin work on our first task, which is the development and financing of a soccer-ready stadium, suitable to CPL league-wide standards. Today starts the conversation with Prairieland Park to develop and finalize all the details,” an LSSE spokesperson told CanPL.ca. 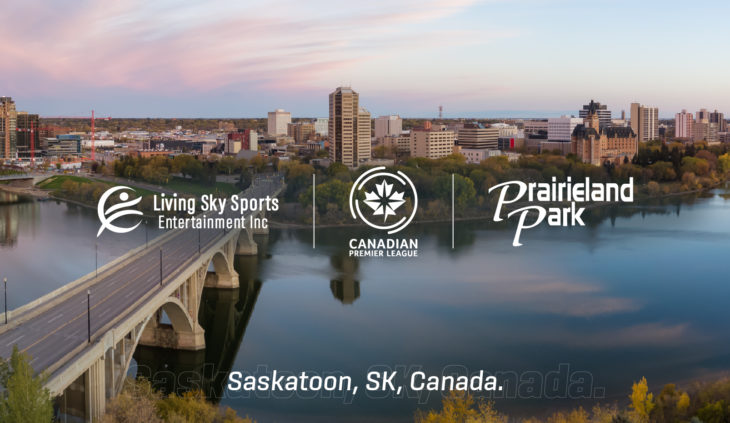 Alan Simpson, founder of LSSE and a lifelong resident of Saskatchewan, will head the effort to bring a CPL club to the province. Prairieland Park is getting out of the horse racing business, and Simpson revealed that the goal is to “hit the ground running with a 4,000-seat stadium” by refurbishing parts of Marquis Downs and developing further around it, with “the opportunity to expand as required.”

Simpson wouldn’t commit to a start date for the club, but said, “ideally, we’d like to be part of the league and playing in 2023.”

“That’s a very ambitious timeline given what you need to do for a stadium… We’ll try to be aggressive and assertive on our timelines,” Simpson stated.

He also explained that a team name and team colours haven’t yet been decided for the expansion club.

CPL Commissioner David Clanachan told CanPL.ca that “it was vitally important that we had someone from Saskatchewan that leads this club.”

“About a year ago the league was introduced to Al Simpson and over time our conversations evolved and demonstrated that Al was a Canadian extremely interested in soccer and bringing a team to fruition,” Clanachan explained.

The CPL currently has eight teams across five provinces and both coasts. Clanachan said the CPL’s expansion into Saskatchewan “continues to build on our coast-to-coast vision for the league.”

“This is Canada’s top tier league for men’s professional football and we talk about it being a coast-to-coast league and being in Saskatchewan is another piece to the puzzle. … This is an exciting day and the first step to bring a team to Saskatoon,” Clanachan offered.

RELATED READING: Alan Simpson on supporters, stadiums, and the CPL in Saskatchewan

The Commissioner also said this deal could lead to further league expansion in the Prairies.

“When it comes to expansion there’s a very specific formula; it’s all about timing and opportunity and where we are as a league at that moment. But if the right ownership group comes along that meets all the criteria we would be open to considering it,” Clanachan stated.

Rob Friend, CEO of Pacific FC and a native of Saskatchewan, said he is looking forward to the day when his team plays their first game in Saskatoon.

“As someone who is proud of his Saskatchewan roots I am thrilled for the soccer fans and supporters from Saskatchewan about today’s announcement. I know the passion and love of soccer is already well established across the province and this is an exciting first step for Saskatchewan finally getting recognition on a national stage,” said Friend, a native of Rosetown who earned 32 caps for Canada’s national team during his playing career.

Interest in bringing a CPL club to Saskatchewan has been brewing for quite some time. In August of 2019, a select team from Saskatchewan faced Toronto FC II in an exhibition match during the SK Summer Soccer Series in Saskatoon. Local supporters group Bridge City Firm was in full voice on the day, chanting “We want CPL” after the game in a call for expansion into the province.

Midfielder Brett Levis became the CPL’s first player born in Saskatchewan when he signed with Valour FC last May, and can trace the beginning of his career path back to his playing days at the University of Saskatchewan.

Levis has seen the growth of the game in Saskatchewan, and is excited about the prospect of the CPL coming to his home province.

“(The idea has) been thrown around in the last couple years but to get it out of the blue like this makes it that much sweeter,” Levis told CanPL.ca. “Even when it’s been up in the air people are convinced it would succeed.”

He later added: “To get in front of a crowd like that would be incredible. I just hope it has the same impact this league has had on Canadian soccer by offering a more tangible thing for young players to aspire to in this community. It’s long overdue in terms of the community that we have here and the fan base.”

With a population of 246,376, Saskatoon is the largest city in the province, and is the home of the University of Saskatchewan, and the Saskatoon Blades of the Western Hockey League.