A glance into a player’s living room is all ChuBoi (real name Chu Morah) and Mike LaBelle need in order to find a winner.

As EA Sports FIFA celebrity FIFA 20 gamers and hosts of the eCPL Home To Play tournament, they have seen a lot of themselves in the Canadian Premier League players vying for the Home To Play title, which will be officially awarded on Friday.

HFX Wanderers FC goalkeeper Christian Oxner, for one, has caught ChuBoi’s eye thanks to his impressive “gaming room.”

“He has the desk, the headphones, the energy drinks,” ChuBoi joked. “He’s good enough to go pro… Just to see he has that talent, it makes you wonder how he fits the time in as a professional footballer.”

LaBelle, meanwhile, earmarked Hamilton as a favourite back in Week 1 after, uh, seeing his gaming stance on camera.

“If the setup resembles what we have as FIFA geeks, I immediately think they are serious,” LaBelle quipped. “There’s this eSports stance – it’s not quite slouched, but you’re looking close to the screen. He has that and you can tell he’s focused.”

FIFA pros and players from Forge FC and FC Edmonton will also feature in the Friday’s “final four.” Tournament matchups consist of two-legged ties played between the clubs’ FIFA pros and CPL players, taking an aggregate score to crown a winner. Top seed Atlético Ottawa faces Forge FC in one semifinal, while the other semifinal features HFX Wanderers FC vs. FC Edmonton.

Canada’s brightest soccer gamers have dazzled with intriguing tactical choices and blistering decision-making, a stark contrast to CPLers who are, well, the best on their real-life soccer squad.

“It’s all about making the right decision at the right time. That’s what eSports is all about,” ChuBoi explained. “Instead of taking the obvious chance, maybe I pass it an extra three times. They’ll have an obvious shot and they just pass it right across to make the most-effective shot.”

Narratives are rife with CPL’s FIFA pros. Forge FC’s GoalMachine, a native of Etobicoke, Ont., is a “giant-killer” of sorts after taking down the world number one EA Sports FIFA player last year. FC Edmonton’s Sibwolf, meanwhile, is a quiet and modest player on the rise in Canada.

“Sibwolf has been really close to making it. He was around last year but this year people are starting to take notice,” ChuBoi said.

Malyk Hamilton clearly backed up his “gaming stance” to LaBelle after winning Week 1 and Week 3 titles. A technically gifted FIFA player with loads of in-game flair, LaBelle is quick to tip Hamilton’s Ottawa side for the championship.

“Malyk is definitely the best of the CPL players,” LaBelle said. “Malyk is very gifted with quick passing; intricate build-up play, counter-attack is smoother than everyone else. Good at the skill moves, too.

“I bet you Malyk would beat ChuBoi at FIFA.”

ChuBoi is quick to give credit to Hamilton – though no challenge to a game of FIFA was made – after he took down Oxner and the Wanderers in last week’s dead rubber final.

“As soon as I was able to see him multitask – talking to Mike and I and putting together some crazy attacks – I knew he was the real deal,” ChuBoi said.

Halifax and Ottawa are favourites, but neither FIFA expert is taking FC Edmonton and Forge lightly. After all, the two sides met in the Week 2 final, with Forge taking a 5-3 win on aggregate. GoalMachine went 3-0 during that run – a rare feat in the nip-and-tuck pro game.

For the Eddies, Swedish midfielder Erik Zetterberg is considered an all-rounder at FIFA while Sibwolf remains a dark horse – in eCPL and FIFA pro circles.

RELATED READING: FC Edmonton’s Zetterberg self-isolating on his own: ‘You go a little bit crazy’

“He doesn’t do anything amazingly well, but he’s actually very tactically aware,” LaBelle offered. “He’s very structured with his buildup.

“They could be the underdog, especially with Sibwolf. They both go under the radar because they aren’t big personalities.”

As the best four CPL sides remain, ChuBoi and LaBelle are hopeful for compelling matchups on Friday.

“Very curious from the pros to see how aggressive they will be,” LaBelle said, adding that a do-or-die format could make for more exciting top-level play.

“They could be a little more open.”

However, margins are slim between pros – no massive wins or dominant runs are expected. It’s up to the CPLers to make the difference.

“These FIFA pros are so evenly matched, so the matches to note are on the CPL side,” ChuBoi said. “That will be what decides the tournament.”

Fans will be able to tune in to see Canadian Premier League players compete on the CPL’s Twitch, YouTube and Facebook channels. 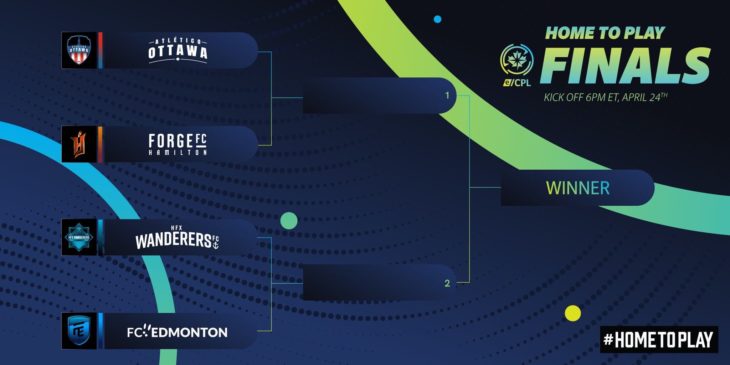