HAMILTON – “Forged in fire” is the imagery around Hamilton’s own Forge FC, but in retelling the history of this new Canadian club, the story of its open trials will be recounted with mentions of cold and rain instead.

Still, the steely soccer players that call Hamilton home didn’t let a little the conditions of the day spoil the event as more than 200 young talents converged at Tim Hortons Field to showcase their skills in front of the Canadian Premier League’s head coaches, hoping to earning a spot in one of the seven clubs’ preseason camp.

Among those coaches stands Bobby Smyrniotis, the newly-named boss of Forge FC, who spoke with excitement about his chance to get a look at the talent in Hamilton first-hand..

“Getting feedback from the first couple of trials, guys have been pleasantly surprised, not only with the numbers of players that are out there but with the excitement around the league, and that’s what we want all around,” Smyrniotis told CanPL.ca.

“Coming here to Hamilton, it’s great to see the numbers of players – we’re at over 220 players and this morning, there’s some quality players out there.”

The former Sigma FC boss is no stranger to working and molding young talents – Smyrniotis helped bring up Canadian international players like Cyle Larin of Besiktas, Kyle Bekker, and Manjrekar James, among others. As he and his peers whittle down the more than 200 participants to a list of around 50 players for Day 2, Smyrniotis will be keeping a close eye on traits like an individual players range and decision making in “real-world settings” – both of which he said would be easier to identify in full, 11-v-11 matches on Tuesday.

Beyond Hamilton, Smyrniotis was also intrigued by the prospect of seeing Canadian talents from coast-to-coast, too.

“We have a good idea of a few players out here (in Hamilton),” Smyrniotis offered. “But it’s important for us here at Forge FC and Hamilton to see what football is like in communities like Winnipeg and Calgary, for some of us who aren’t there on a daily basis.” 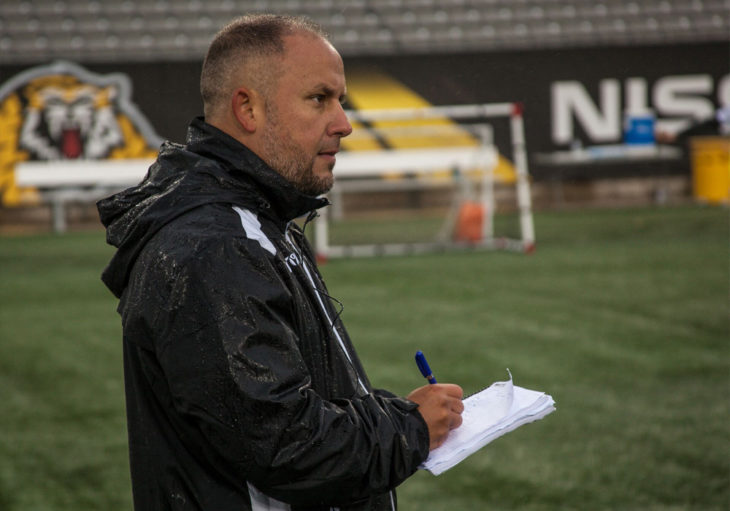 Forge FC co-founder Bob Young was also on scene at Tim Hortons Field, and offered his enthusiastic support for the manifestation of the vision he and his colleagues have worked tirelessly toward for the last four years.

“What is essential to the success of this league is the sense that it’s Canada’s league,” Young told CanPL.ca. “There’s no way to make Canada’s league more Canadian than to get all of Canada’s best soccer players to be able to brag to their friends about how they made it or almost made it to Forge FC; that they were invited to the team’s tryouts before it kicked off, they were evaluated, they were considered good enough to play at Tim Hortons Field.

He added: “We had this hypothesis over the last four years that we’ve been working on this, that Canadian sports fans generally and, of course, Canadian soccer fans specifically, are so frustrated with not having any Canadian connection to the ladder of Canada Soccer. So, as we’re having the opportunity now to talk publicly about what we’re doing and to have open tryouts, we’re seeing the excitement.

“Our hypothesis was there, but now we tangibly see it. These kids will give up a day of their schooling or of their job to come out and play in the rain for the opportunity to be seen by professional coaches. Boy, it’s exciting for us.”