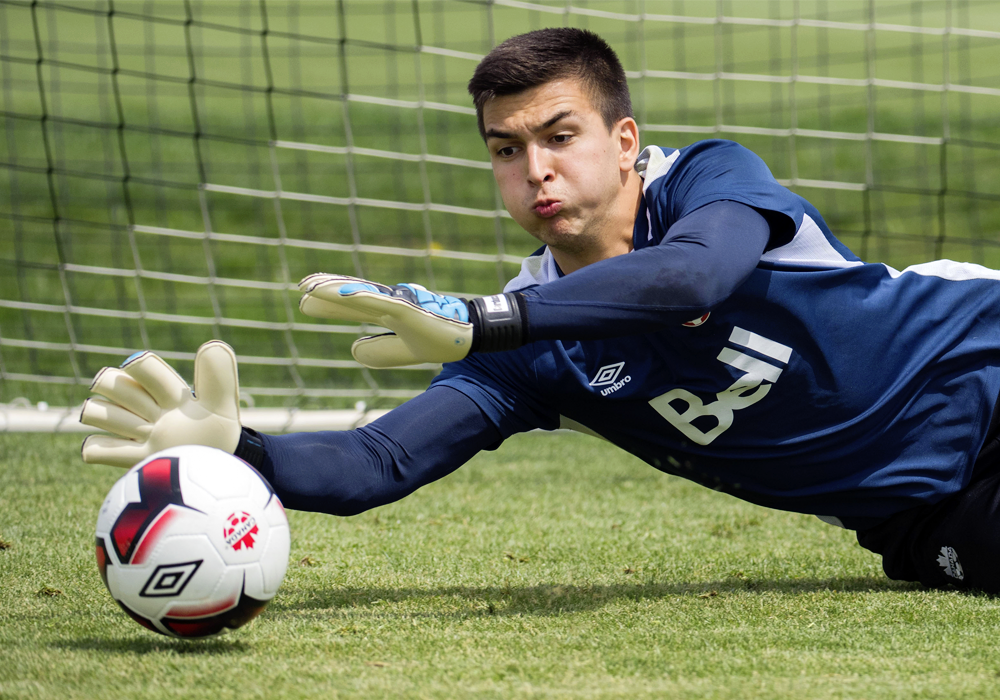 Cavalry’s Carducci ‘right there’ with the best of his generation ahead of CPL’s inaugural season
2018-12-14
by
Armen Bedakian, Supervising Editor

TORONTO – Marco Carducci has one eye firmly on 2026.

The Calgary-born goalkeeper – who joined his hometown Cavalry FC this week and became the first shot-stopper in Canadian Premier League history – is making no secret of his desire to earn a spot on the Canadian national team to play in a World Cup hosted on home soil.

To get there, Carducci figures he’ll have to perform better than “a tonne of really good Canadian goalkeepers” over the next eight years. He told CanPL.ca that he’s already “mapped it all out,” too: He’ll be 29, 30 around that time, “just getting to my best as a ‘keeper,” and the current no. 1 Milan Borjan will be “a fair bit older,” if not already retired from the international game.

When asked where he ranks himself among Canada’s goalkeeping pool, Carducci didn’t bite: “It’s not my judgement call,” he offered.

But don’t let modesty fool you – the 22-year-old is still quite self-assured.

“I’m confident in the goalkeeper I am that I’m right there with the best of them for the next generation,” Carducci told CanPL.ca following the announcement that he’ll be joining Cavalry FC for the inaugural 2019 CPL season.

“It’s going to be on the mind of a lot of goalkeepers, to be the new no. 1 by then,” he continued. “But it’s my biggest goal. I’m going to push towards it every single day.”

Carducci has already gotten a taste of international-level football, having played for Canada at the Under-23, Under-20 and Under-17 levels since 2012.

“It’s the pinnacle of any player’s career, to be able to put on the national team’s crest,” he said, of those experiences.

So that’s the dream. It’s a pretty admirable one, as far as dreams go in professional soccer.

But Carducci knows the road to 2026 is paved in trials and hardships.

It’s not an unfamiliar path, though.

Having bounced around the Vancouver Whitecaps youth system before landing in Rio Grande Valley Toros FC in the USL, Carducci came back home to Calgary in 2018 to play with Tommy Wheeldon Jr. at the Calgary Foothills.

There, he found the first semblance of something he’s sorely needed – something any young goalkeeper needs: meaningful minutes.

It’s that chance – and the exposure it brings – that makes the CPL so appealing for Carducci.

“There was a period of time where I wasn’t playing consistently. I wasn’t really playing much at all,” he said of his career.

“I honestly think playing time is the biggest factor in taking the step to the next level. Meaningful minutes really push you to get better. The saying goes that with goalkeepers, the older you get, the better you get. Each week gives you an opportunity to learn and improve.

“It’s difficult to continue improving if you’re not playing. It’s what you really need. I went through that struggle, and I know a lot of guys did, and that’s what the CPL is addressing: It’s filling that void that players like myself who don’t have many opportunities to play.

“Now it’s about taking our game to the next level.”

Luckily, he’ll stake his claim and his playing time in the familiar comforts of home.

“Honestly, it’s hard to find the words. I didn’t really think this would ever be an opportunity that would be available to me,” Carducci said of his homecoming.

“To realize the opportunity and take advantage of this dream, really, to play professional soccer in my hometown where I grew up means the world to me.”

A World Cup would mean even more.