Soccer fans are able to relive Forge FC’s historic run in the 2019 Concacaf League with the release of a brand new “Forever First” video.

“Forever First: First international club match” was posted on the CPL’s YouTube and IGTV channels on Tuesday for all Canadian soccer supporters to watch and enjoy.

If you weren’t among the crowd at Tim Hortons Field on Aug. 1, 2019, you have a chance to relive the game and watch Forge become the first Canadian Premier League club to compete in (and win) an international match.

Forge’s debut in continental competition ended in dramatic fashion, with the CPL’s entrant in the Concacaf League taking down Guatemalan champions Antigua FC 2-1 via a last-gasp goal from David Choinière.

The Hamilton-based club struggled to break down their Central American opponent through the first half, despite long stretches of possession.

Antigua, meanwhile, looked confident, holding a strong block and looking to score on the counter. The opening goal came after 33 minutes when a blocked in-swinging Antigua free kick fell to Edgar Pacheco outside of the box. The Mexican forward smashed a looping 30-yard strike over goalkeeper Triston Henry, allowing Antigua to bag a crucial away goal.

“We were maybe a little hesitant on the game, not knowing the opponent and the circumstance at hand,” Forge coach Bobby Smyrniotis said. “We had a lot of positive moments in the first half but I think we needed to be more aggressive and get on the front foot.”

Forge stormed out of the blocks after the halftime interval and quickly evened up the score. A corner swerved towards a crowd around the Antigua goalkeeper led to Forge defender Daniel Krutzen nodding home a first goal in continental competition for a CPL side.

Play started to open up after 70 minutes with both sides getting their best chances of the match. Antigua nearly took a lead before Bertrand Owundi blocked a shot destined for the net.

Forge completed the comeback late in injury time when Choinière, who came on as a substitute, broke through the defensive line and laced a left-footed volley for the first-leg win.

“Obviously it’s a huge moment for the club but I would have wanted to score my goal sooner than that,” Choinière joked.

“I got a pass from [Kyle] Bekker, I saw Kwame [Awuah] on the overlap, he found me back and in the back of the net.”

Smyrniotis added: “We have a lot of depth in the team. That’s something I believe in. One thing I’ve told the guys, David included, is we’re all going to play a big part in this.

“It always helps when something like this happens today because it reiterates what you’re preaching.”

Forge went on to earn a 0-0 draw in the return leg in Guatemala the following week, thus winning the series 2-1 on aggregate and advancing to the Concacaf League’s round of 16.

Watch “Forever First: First international club match” by subscribing to the CPL’s YouTube and IGTV channels, or by clicking on the video player at the top of the page. 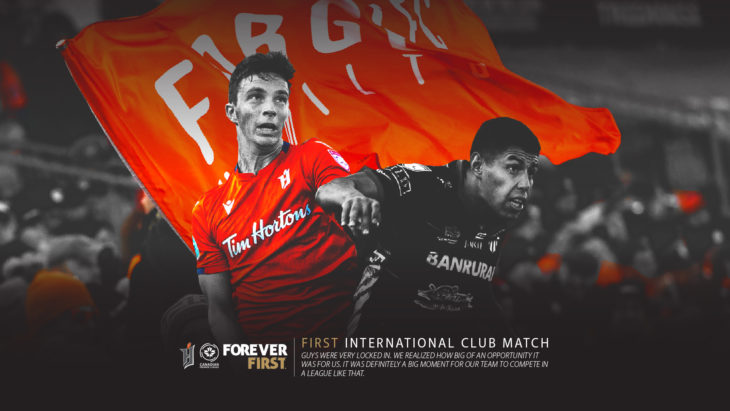