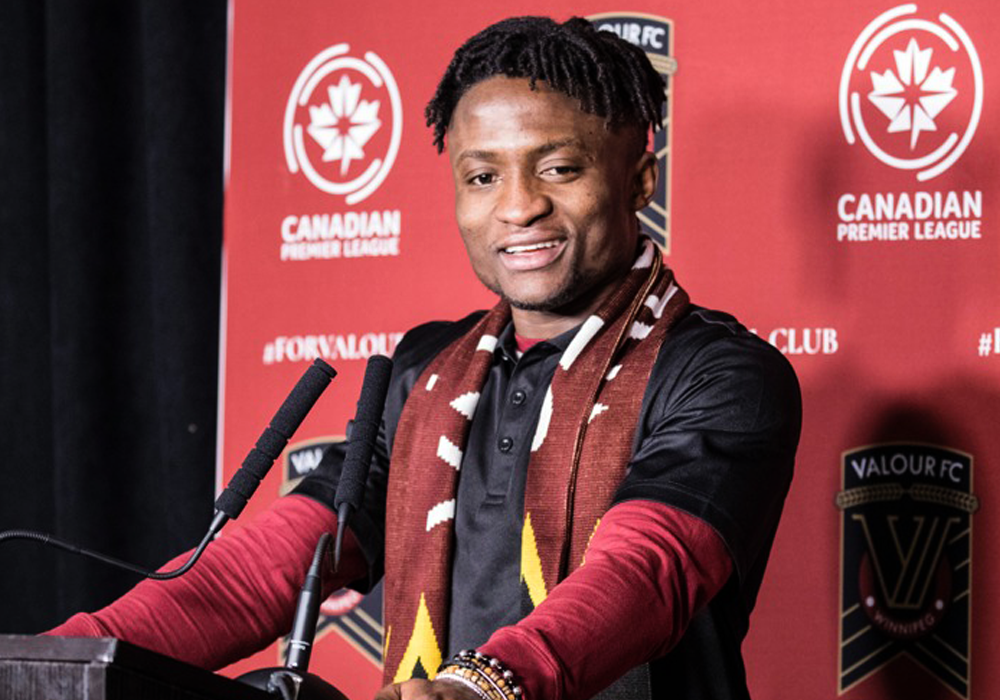 WINNIPEG – He has yet to put foot to ball as a member of Valour FC, but this much is already a given about Raphael Ohin: The man is already leading the Canadian Premier League in thank-yous.

It was an emotional Ohin who stepped to the podium Thursday afternoon at Investors Group Field, a Valour FC  scarf draped around his neck and the conference room jammed with friends, family and supporters.

He opened by thanking God for “bringing me this far, because this is a really special day for me,” and then gave shout-outs to the Winnipeg Soccer Academy and its coaches, the St. Charles Soccer Academy, his church family, and his aunt.

Later, after Valour FC coach Rob Gale had spoken about the club’s two new additions – including defender Raphaël Garcia out of Ottawa – Ohin asked to step to the podium again, so that he could also thank others, including the lawyer who is helping him get his visa, his trainers and his uncle.

“Sorry,” he added, “I can’t remember everybody. But you guys out there know me. I really appreciate you guys. The only thing I can say is, God bless you guys.”

Ohin then posed for photos with some of the crew gathered before sitting down for a one-on-one with valourfootball.club to provide some further details behind what was clearly an emotional day.

“It’s been a long journey,” said Ohin, who was born in Ghana and played in his home country along with Switzerland, Germany, Thailand and Sweden before calling Winnipeg home. “I’ve been waiting for an opportunity like this to play. I’ve been dreaming of this since I was a kid. Playing pro has been my dream. I really love the game. I really love the soccer ball. It’s been my friend since I was a kid. That’s why this is so special to me. I will never, ever forget this day, the day I signed my first professional contract.”

There are a lot of layers to Ohin’s journey, some of which he was reluctant to re-live on a day that was so emotional for him.

“You know, I have had a lot of experiences. There have also been some disappointments,” Ohin said. “But that has built me up. It has challenged me to become the player I am right now. It has given me a thick skin. I have met different players, with different characters and attitudes … some treat you well, some treat you really badly. You just have to learn from it and move on.

“I’m a very religious guy and there was a point where God took over and said, ‘I’m going to do it for you now, son.’ That’s how I came to Winnipeg.”

Ohin is here today, in part, because of a pastor in Ghana and Pastor Carter of the Crestview Park Free Methodist Church in Winnipeg.

“Pastor Carter came to my church in Ghana,” Ohin explained. “My Pastor there said, ‘I have this kid who still wants to chase his dream. Can you help him out?’ To be honest, I wasn’t really happy at first. I had been in Europe and people there were saying ‘What can you get from being in Canada?’ But my family here in Winnipeg I am living with – the Yeboah family, who are also from Ghana – said they would help by hosting me.

“It was a miracle how things worked out. From the very first day I got here they have treated me really well. And from that to this day has been one blessing to the next blessing. If somebody asks me about Winnipeg, I tell them the people are really honest and really welcoming.”

Ohin and Garcia are the seventh and eighth players announced to contracts by Valour FC. Gale spoke of Ohin’s character and his potential to shine at the next level, while also raving about adding Garcia, a 19-year-old prospect who comes to Valour FC from the Montreal Impact Academy, the Ottawa Fury affiliate who Gale worked with during his days with the youth national team.

“That’s a big pick-up for us,” said Gale of Garcia. “He’s a slighter build, but has all the modern attributes for a fullback: he’s pacey, he’s direct. There were a lot of clubs in for him, so he’s one – like Raphael here – that we’re very pleased to have on our books. I think the Manitoba supporters are really going to enjoy having both these players in our colours.”

Ohin smiled at hearing Gale speak of him so glowingly. Later, in the one-on-one session, he opened up further about his passion for the game and why this day was so important.

“My mom tells me when I was even just one I was chasing after a soccer ball,” he said. “I would cry over a soccer ball. I would even fight people to take their ball away from them. One time I was crying over a ball that didn’t belong to me and she said, ‘I’ll take you to the store and get you a ball. That way you can stop fighting people over a soccer ball.’

“Again, all of this is part of my journey and why this is so meaningful to me. I’m not done thanking people yet. There are so many more. I’ll get to thanking them, too.”