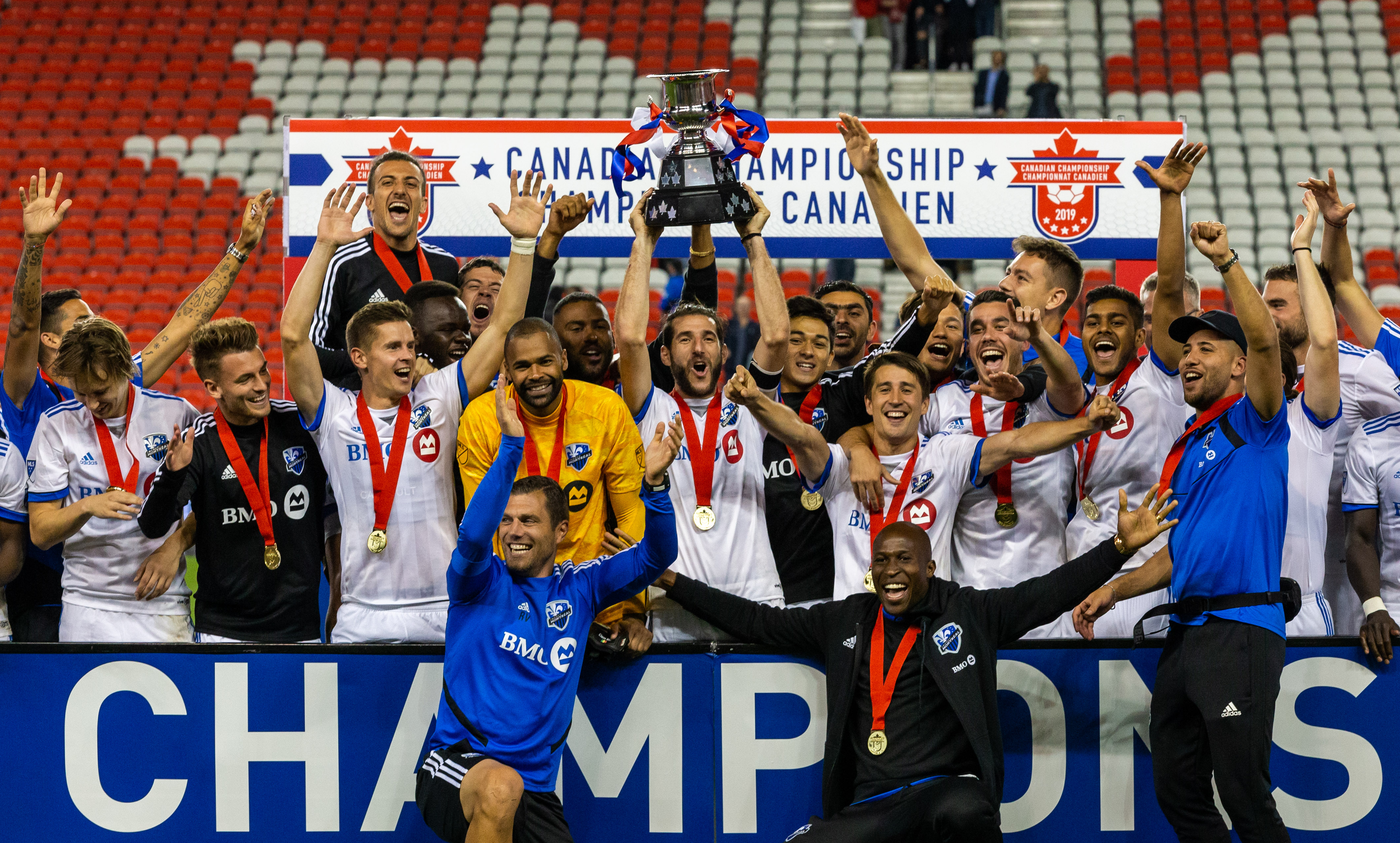 Still, in the spirit of actually publishing those history books we so love to mention, this month-by-month breakdown serves to act as a reference point and a reminder of how far Canadian soccer came this year. So, without further ado, here’s part three of four in our 2019 year in review:

Strap yourselves in, ladies and gentlemen. July hosts one of the wildest stories in Canadian soccer from 2019.

Let’s begin at the top of the month on July 1 – Canada Day. Cavalry FC, crowned Spring title winners, were on a wonderful high. Tommy Wheeldon Jr.’s team was firing on all cylinders. Their style of play was dubbed “90 Minutes of Hell,” a fitting description for the high-pressing, constant pressure seen from the Cavs’ midfield line, up to their forwards, across wingers and full-backs … really, all over the park. Worthy Spring winners, Cavalry celebrated their spot in Finals 2019, knowing another foe would be joining them by season’s end.

But, that’s not the real story of July.

To tell that story correctly, we must also pop over to the MLS standings – specifically, the Western Conference, where the Whitecaps, under new head coach Marc Dos Santos, had won just four of their first 20 matches of the 2019 campaign. Facing the prospect of taking on an in-form Cavalry, the Whitecaps, on the back of a five-match winless run, squared off at ATCO Field, Spruce Meadows for the first leg on July 10.

Never has a 0-0 draw been so celebrated in the city of Calgary. But for Maxime Crépeau’s safe hands, those celebrations would have been tenfold.

Meanwhile, in York Region, a moment of magic turned tragic in a wild second half between York9 FC and the Montreal Impact. That Omar Browne scored the Impact’s opening goal in the 63rd minute wasn’t a surprise, on paper. But, Ryan Telfer’s 83rd-minute equalizer certainly shocked a few travelling supporters … as did Rodrigo Gattas’ stunning go-ahead in the 88th minute. Holding an incredible 2-1 lead over the Impact, the Nine Stripes seemed destined for the very first CPL win over and MLS side … but, a conceded penalty in the 92nd minute saw the two split the result in York 2-2, instead.

Over in Halifax, the story was much the same; a wild back-and-forth saw both teams trade a pair of goals, only for Maxim Tissot to draw a third in the 67th minute, a goal the Wanderers couldn’t overcome at home. As far as first leg results go, all three CPL outfits had exceeded expectations, though it was York9 who would ruminate on their missed chance the most.

Those second legs told another tale.

The Wanderers went into Ottawa needing a win by two goals, having conceded three away goals at home. Tomasz Skublak and Luis Alberto Perea gave Stephen Hart’s side exactly that … only for Fury defender Onua Obasi to strike back at the stroke of half-time. A Cristiano Francois goal in the 66th minute overturned HFX’s lead, and Halifax’s CanChamp run came to a frustrating end.

York9 attempted similar heroics in their second leg bout at State Saputo in Montreal, with Telfer nearly opening the scoring but instead watching on in horror as his shot on an open net went wide. Ignacio Piatti turned on the engine and buried the Nine Stripes with a 55th-minute penalty, ending Jimmy Brennan’s first foray as a coach in this competition.

But … at B.C. Place in Vancouver, something special was brewing.

Englishman Jordan Brown shocked the Vancouver crowd just seven minutes into this second leg clash, finding the back of the net, cool as you like, after a bad bit of defending saw a long forward pass land fortuitously at his feet. Vancouver’s Hwang In-Beom would equalize an hour later, capitalizing on some chaos in the Cavalry box, but with the visitors holding an away goal, the advantage was still in favour of the CPL outfit.

It wouldn’t matter, in the end. Dominick Zator made sure of that, just four minutes later, scoring a massive goal off a header from a corner kick to restore Cavalry’s lead, one they would see out for the rest of those epic 90 minutes to give the Calgarian outfit a historic victory over the Whitecaps, eliminating them from the competition, and advancing to take on the Impact in the semi-finals.

It was Cavalry’s performance of the season; their greatest achievement in 2019. And, it would prove to be the first “cupset” in CanChamp history, too, as a CPL outfit defeated an MLS side in the very first year of existence. That, ladies and gentlemen, is the story of July 2019.

One more talking point from the month ought to be mentioned, though. Over in Hamilton, Forge FC striker Emery Welshman was recalled from loan by FC Cincinnati and was transferred by his parent club to a team in Israel. In his stead, Bobby Smyrniotis brought in David Edgar, and right on time, too, as his signing cemented the Forge backline such that a July 13 win kicked off a run of 14 matches without a loss. And, come the end of the month, both HFX and Valour ended their winless streaks at five and eight matches respectively, too.

Finally, Toronto FC added U.S. defender Omar Gonzalez to their backline, Venezuelan winger Erickson Gallardo to the attack, and brought in French forward Nicolas Benezet on loan, shoring up just in time to make a run into playoff qualification. The Reds also traded Jordan Hamilton to the Columbus Crew.

If July was defined by Cavalry’s incredible Canadian Championship triumph over the Whitecaps, August belonged to Forge in CONCACAF League play.

Round 4 of the Canadian Championship – the semi-final stage – saw the Impact defeat Cavalry 2-1 at home in Montreal for Leg 1, then turn around and inflict a 1-0 defeat on the Cavs in Leg 2, one week later in Calgary. Ignacio Piatti played hero in the first leg, scoring a brace, before Anthony Jackson-Hamel buried the Cavs with his sole effort in Leg 2. The Impact would advance to take on Toronto FC, who dispatched the Ottawa Fury 5-0 over two legs in their first bit of 2019 Canadian Championship action.

Before we get to the meat and potatoes of August, let’s also recap a few more interesting developments; Forge defeated Cavalry 1-0 at Tim Hortons Field as the Fall portion of the season got underway. HFX Wanderers FC sent Peter Schaale back to Cape Breton University, fulfilling the benefit of the CPL-U SPORTS arrangement that saw players maintain their university eligibility. And, Cavalry and FC Edmonton played out to a 0-0 draw in the third Al Classico of 2019.

So, let’s get to it, then. August saw Forge FC represent Canada in the nation’s second spot in CONCACAF Champions League qualification, by merit of finishing above FC Edmonton and Valour FC in the first stanza of the 2019 season. As a result, the Hamiltonian outfit was drawn against Guatemalan champions Antigua GFC, with a two-legged tie providing them their first opportunity at qualifying for a berth in CONCACAF’s intercontinental competition.

The first leg in Hamilton went swimmingly, with Forge defeating Antigua GFC 2-1 courtesy of goals from Daniel Krutzen and David Choiniere. The second leg in Guatemala was more straightforward, with Forge holding off the home team to a 0-0 draw at the Estadio Doroteo Guamuch Flores in Guatemala City.

Up next? A meeting with Honduran champion C.D. Olimpia, who, in the build-up to this series, suffered a couple of off-field problems that added a layer of drama and caution to the occasion. Besides failing to secure adequate paperwork for a number of their players ahead of Leg 1 in Hamilton, the Honduran outfit’s younger core was busy down in South America, playing in a youth tournament. It meant a short-handed Olimpia took on a full-strength Forge at Tim Hortons Field, and a 1-0 result off a fourth-minute Chris Nanco opener gave Forge the advantage after the first 90 minutes of play.

Then, violence between rival fans of Olimpia and Motagua erupted in the build-up to the second leg, causing some casualties in the stands. As a result, Olimpia was barred from playing the 2nd leg in their own home stadium, and had to instead play at a neutral venue behind closed doors … specifically, the Estadio Olimpico Metropolitano in San Pedro Sula.

You’d be forgiven if you shuddered at the name. It was the home of Canada’s painful 8-1 defeat to Honduras in World Cup qualifying, after all.

Unfortunately, Forge’s fortunes weren’t much better, as the club battled a bout of food poisoning in Honduras, and, facing a now full-strength Olimpia, succumbed to a 4-1 defeat in front of an audience of zero in San Pedro Sula.

It left the conclusion of August on a bit of a sour note … though, Cavalry goalkeeper Marco Carducci ensured August would end on a high, as he became the first CPL player called up to the Canadian men’s national team, after John Herdman named him to the roster for an upcoming match against Cuba in CONCACAF Nations League A action.

September saw the seven CPL clubs return to solely focus on regular season action, with Cavalry getting things started by way of an 8-0 victory over Valour FC.

Canada made short work of Cuba at BMO Field, defeating the visitors 6-0 as Herdman’s side marched onward in CONCACAF Nations League A. The reverse leg saw Canada win 1-0, too, thus rising to 75th in FIFA’s World Rankings.

But, the most important rivalry meeting of the month belonged at the very top of the 2019 Canadian Championship pyramid, as the Montreal Impact squared off against bitter foes Toronto FC in the finals. Ignacio Piatti once again played the hero at Stade Saputo, giving his team a 1-0 advantage after the first leg. But, BMO Field would once again prove to be Montreal’s undoing, as Tsubasa Endoh’s equalizer in the second leg saw these two teams play out to a 1-1 draw over two legs, forcing a penalty shootout.

That Bojan Krkic, Daniel Lovitz, and Rudy Camacho all buried their spot-kicks for Montreal was key, of course … but, penalty misses by Jozy Altidore, Patrick Mullens, and, finally, Jonathan Osorio saw Toronto FC hand the Voyageurs Cup back to Montreal with little more than a whimper. Well out of contention for a playoff spot in MLS, the Impact celebrated their 2019 Canadian Championship win as the shining light of their 2019 campaign, as Quebec reigned supreme in this new, provincially-robust iteration of the competition!

Up next? Canada’s national team faces its toughest test yet in the United States, while Finals 2019 brought the inaugural CPL season to a dramatic close.