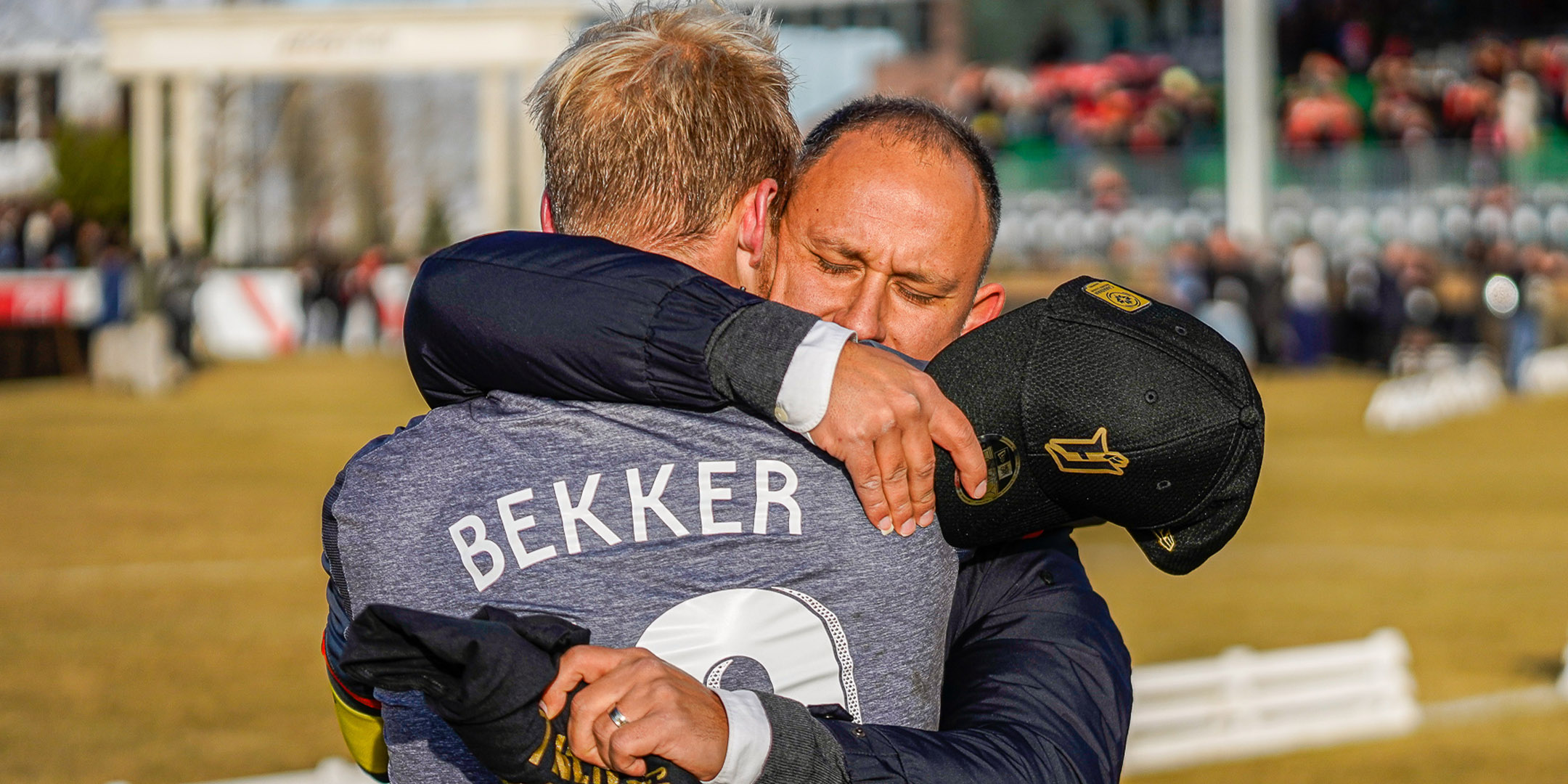 Still, in the spirit of actually publishing those history books we so love to mention, this month-by-month breakdown serves to act as a reference point and a reminder of how far Canadian soccer came this year. So, without further ado, here’s the finale of our four-part, 2019 year in review:

Oh, October. The first signs of a year’s end approaches. Spring has sprung, summer has ended, and as the great maples of Canada display their fiery hues, so too did Canada begin anew. Fresh off a disappointing Gold Cup adventure, John Herdman’s team was determined to get their Concacaf Nations League adventure off on the right track, awaiting a tilt with our neighbours in the United States at BMO Field.

Amer Didic of FC Edmonton became the second CPL-er called up to the national team camp, despite the Eddies barely tasting victory in recent weeks; Jeff Paulus’ side ended a 10-match winless streak on Oct. 5, just 10 days before Didic and his fellow Canadian teammates were to embark on the marquee matchup of the year against the U.S.

Let’s preface this with a quick check-in on the CPL and MLS. At this point, Toronto FC locked up a playoff berth and had a one-off date with D.C. United to look forward to shortly after Canada-USA. In the CPL, the Fall season race continued to go down to the wire, as Cavalry and Forge looked deadlocked at the top of the table. A 1-0 Forge win over York9 was followed up quickly with a reverse tilt at York Lions Stadium, which saw the Nine Stripes hand Forge a 4-0 loss to chew on, ending a 14-match unbeaten streak.

Forge and Cavalry met twice more in regular season action (meetings 6 and 7, if you’ve been keeping count), with Cavalry winning 2-1 in the first tilt, and Forge winning 1-0 in the second. It set up a Fall title clincher with an Al Classico on the final day of the campaign, though Forge had already locked up the second berth in Finals 2019 by merit of accumulating more points at second place than any other team could reach.

So, that’s where we’re at come Oct. 15 at BMO Field, as Canada stepped out onto the field and hosted the U.S. – a team that Canada had not defeated in 34 years.

That Alphonso Davies’ star shone the brightest under the lights at BMO Field is an understatement; his counterpart, Christian Pulisic, was made a complete non-factor by a sturdy, albeit makeshift Canadian back line, and even an injury to Mark-Anthony Kaye didn’t stop Les Rouges, as Liam Fraser stepped in and put in a commendable showing in midfield.

His impact was felt, too, as Fraser set up Scott Arfield at the edge of the U.S. box, with Arfield sending a low ball across goal to an onrushing Davies. The young phenom tapped home the effort to give Canada a rare 1-0 lead in the 63rd minute of play. But, that wouldn’t be all for Canada, as Jonathan Osorio plucked out Lucas Cavallini with a chipped through pass in the 91st minute, which the striker coolly slotted home to give Canada a historic 2-0 victory over the Stars and Stripes.

Exhale. What a moment.

It would be a short celebration, though; the fact remained that there was still another leg to be played between Canada and the U.S. in Florida the next month, and an MLS Cup run and Finals 2019 to consider at the club level, too.

To that end, Toronto FC made long work of D.C. United in their opening playoff tilt, defeating the visitors 5-1, with four goals coming in extra time after a late D.C. goal forced two additional periods of play after the 90-minute mark. Cavalry FC would defeat FC Edmonton 3-1 to claim the Fall title, setting up an away-home series for Finals 2019.

The Reds next took on New York City FC on Oct. 23, with a 90th-minute Alejandro Pozuelo penalty making the difference in a 2-1 win in New York. By the end of the month, Toronto FC would be contending the Eastern Conference Championship against 2018 MLS Cup champions Atlanta United.

Meanwhile, the inaugural Canadian Premier League season came to an end after 98 regular season matches. Tim Hortons Field would host Leg 1 of Finals 2019 on Oct. 26, with ATCO Field, Spruce Meadows playing home to Leg 2 on Nov. 2. That first leg would prove a testy affair, as a red card to Joel Waterman and to the game’s lone goal-scorer Tristan Borges marred what was otherwise a fierce eighth meeting between these two foes.

Forge walked out of Hamilton with a 1-0 lead heading into Leg 2, and began proceedings with Canada Soccer to appeal Borges’ red card. That appeal was proven successful, and Borges was back for Leg 2 at ATCO Field in Calgary.

Wrapping up the month? Toronto FC defeated Atlanta United 2-1 courtesy of a 78th-minute winner by Nick DeLeon, putting Greg Vanney’s team back in the MLS Cup final for the third time in four years … where they’d face the Seattle Sounders for the third time, too, albeit away from home at CenturyLink Field for the first time.

November: The highs and heartbreaks of professional soccer

November 2nd. ATCO Field, Spruce Meadows in Calgary, Alberta. The stage was set. One final meeting between Forge FC and Cavalry FC. The visitors from Hamilton held a 1-0 lead from Leg 1. Borges’ red card appeal drew the ire of the Cavs, who felt he should not be a factor in this matchup. Both coaches exchanged pleasantries in the build-up. A healthy dose of respect was given to both sides. But, it was clear this would not be a friendly fixture, even before a ball was kicked. You could smell it in the air.

That Cavalry unleashed the totality of their “90 minutes of hell” on Forge isn’t shocking. But, the steadfast Forge back line held on admirably, preventing Nico Pasquotti, Dominique Malonga, Sergio Camargo, and co. from finding the back of the net. Try and try as they might, Cavalry could not break down the Forge defence, and were eventually punished for their forward traversals, as David Choinière caught the Cavs well out late in the match to seal another 1-0 victory for Hamilton.

There it was. History. Forge FC was crowned the inaugural Canadian Premier League champion.

Kyle Bekker hoisted the North Star Shield for the first time as the travelling Barton St. Battalion celebrated in Calgary. In the aftermath, drinks would be drunk (and poured over peoples’ heads) and Forge would return to Hamilton to a hero’s welcome. They go down as the first-ever champions of the CPL. Forever First, as it were.

That, ladies and gentlemen, is the story of the 2019 Canadian Premier League season.

Rounding out the month? The Canadian women’s national team lost 4-0 to Brazil in the Yongchuan International tournament, their second 4-0 loss in a row following a prior loss to Japan. Cavalry’s Dominick Zator earned a call-up to the Canadian men’s national team alongside Didic, though Canada would go on to lose 4-1 to the United States in Leg 2, putting their CONCACAF Hex qualification in some trouble as El Salvador moved 15 points ahead of Canada for sixth in the region in FIFA’s World Rankings.

And, of course, Toronto FC took on the Seattle Sounders in MLS Cup 2019, though a 3-1 win by the Sounders made that particular storyline a little tougher to celebrate. Still, in a year of rebuilding, the Reds exceeded expectations and ended 2019 with a pair of finals appearances (Canadian Championship, MLS Cup), though with no silverware to boast about.

The Canadian Premier League’s 2019 CPL-U SPORTS Draft took place in Montreal that same weekend, with 14 players being selected from universities across the country.

A couple more interesting items emerged in November; the Canadian Premier League launched Centre Circle Data, a comprehensive analytics tool giving the public unprecedented access to game, team, and player data via Stats Perform. And, of course, the 2019 CPL Awards saw Tristan Borges take home the Golden Boot, U-21 and Player of the Year awards, while Tommy Wheeldon Jr. and Marco Carducci of Cavalry took home the Coach and Goalkeeper of the Year honours, respectively.

That brings us to the present day. Players will come and go in the coming weeks, as re-signings, new acquisitions, and declined options will round out rosters across the country, whether in the CPL, MLS, or otherwise. And, CPL teams will only get better, too – FC Edmonton’s year-end acquisition of Hanson Boakai is one such step toward a brighter tomorrow.

But the future remains in flux. The Ottawa Fury has folded, and talk of CPL expansion continues through whispers and rumours. What will 2020 bring for Canadian soccer? More highs and lows, to be sure, but also, more hardships. The lustre of newness isn’t quite so bright for the CPL in Year 2, where quality of play and of game-day experience will become more heightened, as a result.

But, in reflecting upon 2019, one thing is clear; from beginning to end, there was no more memorable year from club to international levels in this country’s modern history.